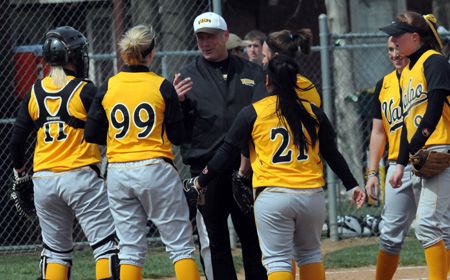 Valparaiso University Director of Athletics Mark LaBarbera has announced that Randy Schneider has resigned his position as head softball coach for the Crusaders, effective immediately, to pursue other coaching endeavors.  A national search for Schneider’s successor will begin immediately.

“Randy did an excellent job in his seven years as head coach of our softball program and we’re thankful for everything he has done for the program,” said LaBarbera.  “The softball program’s success, not only on the field but also in the classroom and in the community, is a strong testament to the hard work he’s put in, and we wish him well as he moves on professionally.”

Schneider served as the softball program’s head coach for seven seasons, arriving at Valpo on August 1, 2003.  He leaves Valpo as the program’s all-time winningest coach, compiling a 172-187-1 record in his seven years, and guided the program to winning seasons each of the past four years.  The Crusaders won 20 or more games in six of his seven seasons after reaching the mark just three times in the program’s first 22 years.

“I want to thank Valparaiso University, former athletics director Bill Steinbrecher, all the current members of the administration, and my assistants over the years for their support as we built the Crusader softball program,” said Schneider.  “I have a deep respect for all the players and coaches I’ve worked with over the years, and I’m certainly proud of all the achievements of the student-athletes I’ve had the chance to work with.  It saddens me to leave, but I know that this program is in good hands, seeing where it is today as compared to seven years ago.”

Along the way, Schneider had 26 players awarded All-League honors and guided the program’s first NFCA All-Region honoree in 2010.  Over the last seven seasons, his squads have completely rewritten the program’s record books and the 2008 team led the entire NCAA with 2.57 stolen bases/game.

But the field wasn’t the only venue where Schneider’s athletes were successful.  His teams always worked hard in the classroom, with 36 NFCA Scholar-Athletes, eight CoSIDA Academic All-District honorees and the program’s first Academic All-American in over 20 years among the academic successes in his seven years.  In the community, he helped the softball program start the “I Need a Hug” initiative, a program run by the softball student-athletes which in its six years of existence has grown exponentially and has placed many thousands of stuffed animals into local schools.

“It was important to me to have built a program at Valpo based on a foundation of strong academics and community service, as well as success on the field and we’ve certainly achieved all those things,” said Schneider.  “The opportunities in front of me right now are just a good fit for my family and opportunities I’ve been searching for over the course of years.  Right now, the program is the best it’s ever been, and with the return of a great core group of student-athletes coming back, they have the ability and chemistry to continue moving forward and find great success on the field next year.”