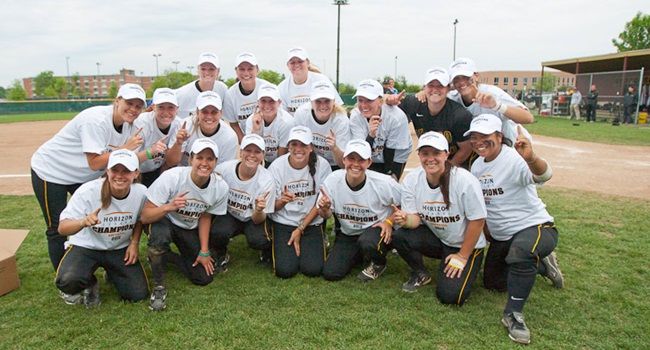 The Crusaders will be competing in the Louisville Regional of the 2012 NCAA Tournament. (Jon Hendricks)
Related Links

Valparaiso softball’s first-ever NCAA trip will take place in Louisville, Ky., as the Crusaders learned Sunday evening that they had been placed in the Louisville Regional of the 2012 NCAA Softball Tournament.  Valpo will open regional play against the host Cardinals, the 15th seed nationally, at 6 p.m. CDT on Friday, May 18, a game which will be televised live nationwide on ESPN2.

“That’s obviously great exposure for our school and for our program to be able to play on television,” said Crusader head coach Jordan Stevens.  “Just seeing our name come up on the screen tonight was a very exciting moment.”

Valpo (42-17) earned its first trip in program history to the NCAA Tournament after capturing the Horizon League Championship to earn the league’s automatic bid.  The Crusaders, who were also the Horizon League regular season champions, won the league tournament in dramatic fashion, winning five consecutive games, the last three of which came via walk-off heroics.

Louisville (53-3) enters the NCAA Tournament after winning both the Big East regular season and tournament championships.  The other side of the four-team regional pits Big Ten champion Michigan (39-15) against Kentucky (29-28), which finished fourth in the Eastern division of the SEC.

“We’re excited, but we also know it’s time to get to work and prepare,” said Stevens.  “We’ve played teams like this before, so it won’t be anything new for us.  All that preparation was to help get us ready for this kind of time.”

The Kentucky-Michigan game kicks off regional action before Valpo takes on Louisville at 6 p.m. CDT on Friday evening on ESPN2.  The double-elimination regional will continue through Sunday, with the winner of the regional earning one of 16 spots into super-regional play.  Every game the Crusaders play in regional action will be televised either on ESPN or ESPN2.

Group and berm: $5.00 Single Session only