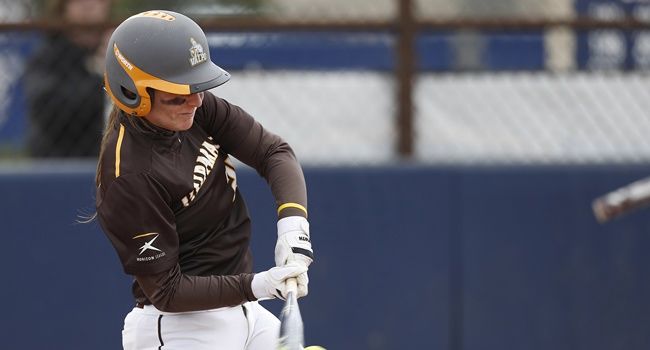 Janelle Bouchard and the Crusaders are picked to win the Horizon League this season. (Steve Woltmann)

For the first time in program history, the two-time defending Horizon League champion Valparaiso softball team has been selected to win the league in preseason polling of the league's head coaches.  The poll was released by the league office Thursday afternoon on the eve of the 2014 campaign.

The Crusaders picked up four of the eight first-place votes in the preseason poll and tallied a total of 46 points.  Valpo edged out UIC, which captured the regular season title last year, as the Flames earned the other four first-place votes and finished with 45 points.  Rounding out the polling, in order, were Wright State, Youngstown State, Cleveland State and Green Bay, with Detroit and Oakland sharing seventh position.

Valparaiso opens the 2014 campaign this weekend at the Hampton Inn of Dunn Invitational in Buies Creek, N.C., hosted by Campbell.  The Crusaders kick off the season Friday against IPFW at 9 a.m.  CT before taking on the host Camels at 2 p.m.  Live stats for each of the tournament’s games will be available through ValpoAthletics.com.