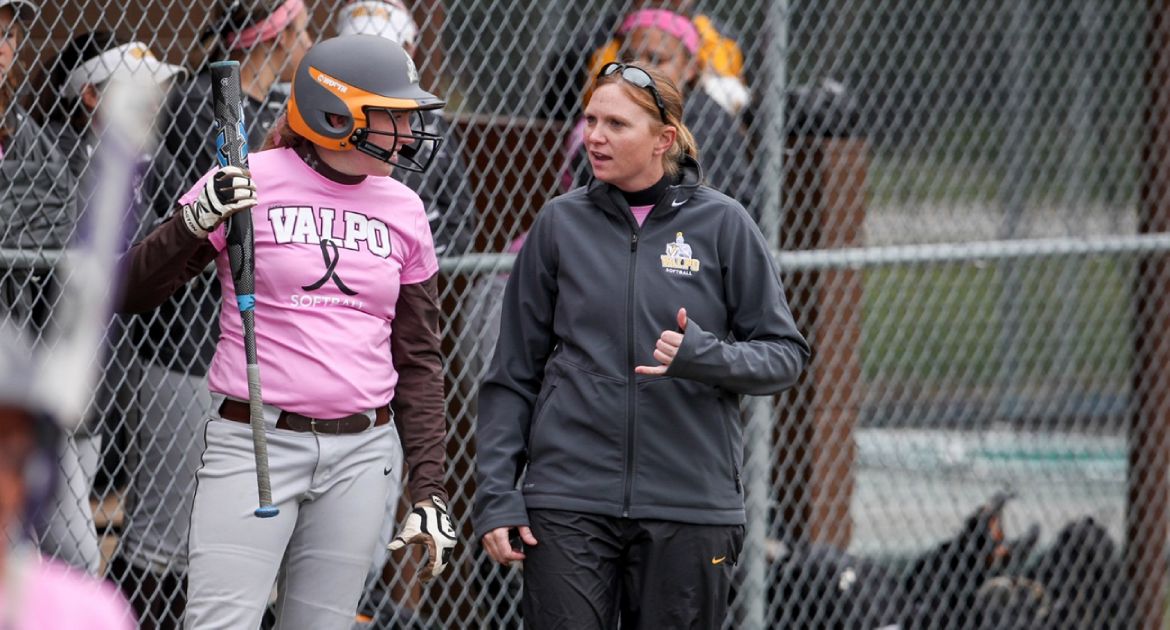 “We are excited to welcome the newest members of Valpo Softball,” said Stake. “There's a wealth of talent in the Midwest, and I'm happy to have pulled these seven players from Indiana and Illinois. It is so important that not only do our incoming student-athletes love to play softball, but also that they love Valpo - and there's no question each of them see the great value they'll receive from their experience as students and athletes from this university.”

Taylor Bowman, a native of Frankfort, Ill., is currently a senior at Lincoln-Way North H.S. A Second Team All-State honoree as a sophomore, Bowman has also earned All-Conference and All-Area accolades. The infielder/outfielder hit .436 and slugged at a .872 clip for Lincoln-Way North.

Hannah Dybalski comes to Valpo from Lebanon [Ind.] H.S., alma mater of current Crusader Ashlyn Montgomery. Dybalski, who is listed as a catcher/utility player, hit .434 last season for Lebanon and got on base at better than a .500 pace in earning First Team All-Conference and All-District accolades, earning All-Conference honors for the third time. Dybalski was a member of the LIDS Indiana Dreams team which placed third at 16U ASA Gold Nationals.

Gabby Magnifico is entering her senior season at York Community H.S. in Elmhurst, Ill. Magnifico is a two-time All-Conference honoree who also picked up All-Area accolades last year. An infielder/outfielder, Magnifico posted a .336 batting average last season for the Dukes.

Morgan Matalin is an outfielder from Crown Point [Ind.] H.S. Last season, Matalin hit .321 and slugged at a .431 clip for the Bulldogs. In 2014, Matalin helped Crown Point capture the regional championship.

Addison Pixley is a native of Osceola, Ind. who plays at Penn H.S. Pixley has been a part of back-to-back conference, sectional and regional championship squads. As a sophomore, Pixley helped Penn qualify for semi-states, while last season, Pixley and the Kingsmen advanced to the state final four. The outfielder/infielder hit .427 and slugged .719 as a junior for Penn.

Emily Richardson is a pitcher out of Oak Park River Forest [Ill.] H.S. Richardson enjoyed a stellar junior campaign in the circle, finishing with a 15-1 record, a 1.48 ERA and 100 strikeouts over 113.1 innings of work. Also solid at the plate, Richardson posted a .392 batting average and a .696 slugging percentage en route to earning All-Conference and All-Area accolades.

Lindsay Zdroik is also a pitcher, coming to Valpo from St. Edward Central Catholic [Ill.] H.S. Zdorik is a standout both in the circle and at the plate, posting a 1.61 ERA and 151 strikeouts in 95.1 innings last year while also hitting .514. She has earned multiple All-Conference and All-Area awards as well.

“We are graduating five very good softball players and very good people, and it was our goal in this class to continue building on the successful athletic foundation those five have laid, as well as the positive influence they've had on our culture,” said Stake. “I think we have filled that with the Class of 2016. Athletically, it's a versatile class that fills our needs in the circle and will create a good amount of competition for playing time both on the infield and outfield.”