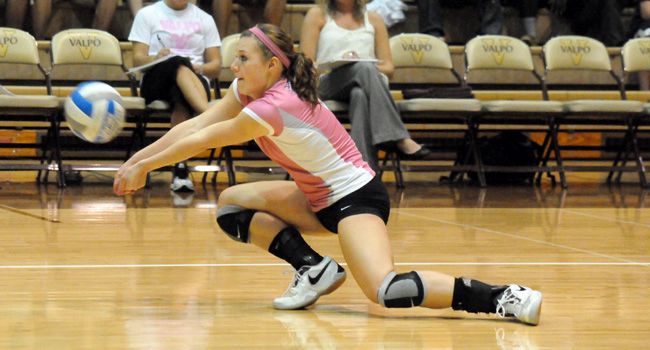 "It's nice to get the first day out of the way," said Crusader head coach Carin Avery.  "It's always nice to get back on the court and compete against somebody else for the first time.  I thought we played well today.  We still have a long way to go, but that's to be expected and that's what these early-season tournaments are for."

The match against the Cougars saw the Crusaders use big runs in each set to take control.  The opening frame, Valpo took a 4-4 tie and made it a 14-4 lead with ten straight points on the serve of freshman Chelsey Tekavec (Solon, Ohio/Solon).  The run featured a trio of kills by senior Mary Dent (Chicago, Ill./Von Steuben), as well as a solo block and a kill from sophomore Morgan Beil (St. Louis, Mo./Marquette).  From there, the Crusaders led by no less than eight points, running off nine consecutive points to end the frame.

The second set again saw a big early-set spurt, as an 11-1 run turned a 6-6 tie into a 17-7 Crusader lead.  The run featured a pair of kills apiece from junior Janelle Hobbs (Hartland, Wis./Arrowhead) and redshirt sophomore Kelsey Victor (Logansport, Ind./Logansport), as Valpo never led by less than six points the rest of the way.  The final frame was close through the midway point, but with a 13-10 advantage, three kills by junior Sarah Dooms (Greenwood, Ind./Center Grove) sparked a 6-0 run that gave the Crusaders breathing room as they completed the sweep.

Hobbs led the Crusaders with eight kills against the Cougars, hitting .429 despite playing just two sets.  Dooms and Dent each tallied seven kills apiece as well for a Crusader offense which hit at a .265 clip for the match.  Freshman Kelsey Berrington (Britton, Mich./Tecumseh) handed out 17 assists to go with her team-best three service aces, while sophomore Ariel Cudney (LaPorte, Ind./LaPorte) dished out 13 assists.

The opening match against SEMO got off to a good start for the Crusaders, as Valpo blitzed the Redhawks in the first set, holding SEMO to just three kills en route to the 25-14 win.  The Crusaders held a 15-10 advantage, but scored 10 of the final 14 points to end the frame, thanks in large part to six kills by Beil.

The second set looked to be going Valpo’s way as well, as the Crusaders led 18-11 in forcing the Redhawks to use their second and final timeout.  But SEMO went on a 15-6 spurt to end the set and tie the match at a set apiece, and then used mid-set runs to take control of each of the final two sets and deal Valpo the loss in the opener.

Beil hit at a solid .367 clip with 14 kills to pace the Valpo offense against the Redhawks, while Dooms tallied 13 kills and Victor 11.  Valpo out-killed SEMO, 57-49, but also committed 29 attack errors over the four sets.  Both Crusader setters picked up double-doubles, as Cudney tallied 23 assists and 13 digs while Berrington picked up 16 assists and 13 digs.  Dooms also recorded a double-double of her own, totaling 19 digs to tie for team-high honors with Root.

"We have a lot of depth this year and a lot of different people playing well right now," said Avery.  "It's a matter of figuring out pieces of the puzzle - who plays well next to whom and who's strongest where on the court.  We're looking forward to getting back onto the court tomorrow and playing two very good teams."

Valparaiso (1-1) closes out action at the Hawkeye Challenge on Saturday with two more matches.  The Crusaders take on South Dakota State at 2 p.m. before closing tournament action against host Iowa at 7 p.m.  Live stats for both matches can be found through www.valpoathletics.com.

Noteworthy: All 12 Crusaders saw action on Friday, with 11 players appearing in both matches ... Berrington and Tekavec both made their Valpo debuts in the opener against SEMO ... Cudney’s previous career-high in assists prior to Friday was four ... Victor’s 11 kills against the Redhawks matched her career best.