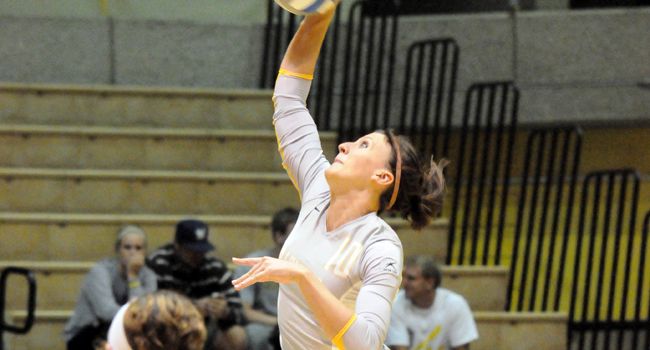 This Week in Crusader Volleyball: The Valparaiso volleyball team opens the 2012 home campaign at the ARC with a rare early-season mid-week match Tuesday night against Illinois State. The Crusaders then travel to Morehead, Ky. to participate in the MSU Eagle Challenge this weekend, facing Missouri and Savannah State in addition to host Morehead State.

Previously: The Crusaders went 1-2 last weekend at the Active Ankle Challenge in St. Louis, Mo. Valpo fell to the host Billikens on Friday night before splitting a pair of contests on Saturday, defeating South Alabama and losing to Southern Illinois. Janelle Hobbs represented the Crusaders on the All-Tournament Team.

Next Up: Valpo will play its final early-season tournament of the 2012 season next weekend, traveling to Bloomington to play in the Hoosier Classic. Besides the matchup with host Indiana, the Crusaders will also take on Miami (Ohio) and UT-Chattanooga.

Following the Crusaders: The match against Illinois State will be the first of ten home matches this year, all of which will be streamed with free live video on the Horizon League Network, along with audio broadcasts on WVUR (95.1 FM, Valparaiso). Six road volleyball matches are also slated for HLN streaming. Links for the live video and live audio of Tuesday’s match, as well as live stats for all four of this week’s contests, will be available through www.valpoathletics.com.

Head Coach Carin Avery: Over her 10 years as head coach, Carin Avery has won 241 matches and has led Valpo to three league regular season and tournament titles, as well as three NCAA Tournament appearances. A two-time league Coach of the Year, Avery has coached 42 All-League recipients over her tenure as Crusader head coach. She is Valpo’s all-time leader in both victories and winning percentage, and is just one win shy of 300 career victories overall.

Series Notes: Valpo has faced its four opponents this weekend just a combined seven times in program history. The Crusaders have played Illinois State twice, with the Redbirds winning both matchups, most recently in 2007. Valpo and Missouri have split two meetings and last met in 2006, a Mizzou win, while the Crusaders are 2-1 all-time against Morehead State, but have not faced the Eagles since 1996. Valpo and Savannah State will be playing for the first time.

A Varied Offense: Early in the season, Valpo is looking for a go-to attacker on the offensive side of the ball, resulting in a number of players pacing the Crusaders in kills. Through seven matches, Valpo has already had six different attackers lead the way in terminations in at least one contest, with only sophomore Morgan Beil pacing the Crusaders multiple times. Beil is also leading the Crusaders overall in kills/set with 2.46, one of four players averaging at laest two kills per frame.

Serving Sensation: Freshman setter Kelsey Berrington has proven early on in her career to be a factor for the Crusaders from the service line. Through two weekends, Berrington has already racked up 11 aces against just six errors on serve and is tied for fifth in the league with 0.41 aces/set. She also has accumulated 127 total serves, far and away the most on the team, as Sarah Dooms sits second with 88.

Digging Deep: For the first time since November of 2009, the Crusaders had back-to-back matches last weekend where a player other than the libero led the team in digs, as Dooms posted a career-best 24 digs against Saint Louis before pacing Valpo with 19 in the win over South Alabama. Dooms is averaging 4.15 digs/set so far this year, good for seventh in the league, while senior libero Taylor Root is third with 4.78 digs/set.