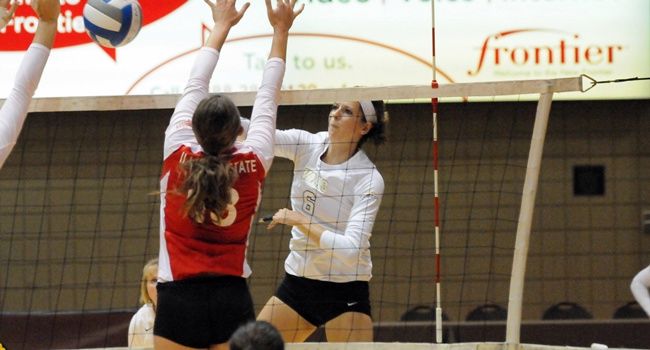 Valpo used large early-set runs in each of the first two frames in its nightcap to jump ahead in the match against Savannah State.  The two sides were tied at 6-6 in the opening set before the Crusaders rattled off 12 of the next 13 points to take control.  Redshirt sophomore Kelsey Victor (Logansport, Ind./Logansport) tallied four kills during the run, while fellow redshirt sophomore Lindsey Hauch (Coloma, Mich./Coloma) picked up three terminations as Valpo claimed a double-digit lead for good.

The decisive run in the second set came even earlier, as with a 4-3 lead, the Crusaders rolled off nine consecutive points to go ahead 13-3.  Victor and Hauch each posted a pair of kills during the run, while freshman Chelsey Tekavec (Solon, Ohio/Solon) served throughout the run and tallied an ace as well.  The lead never dipped under eight points the rest of the way as the Crusaders took a two-set lead.

The third set saw Valpo tally five points in a row to push a 6-5 lead to 11-5, including two kills by Victor and a pair of service aces from Tekavec.  The 5-0 run started a larger 9-2 push as the Crusaders went ahead by a 15-7 count.  Savannah State scored the next three points to cut the Valpo advantage to five, but Hauch picked up a kill and two aces as part of a four-point spurt to push the lead back up to 19-10 as the Crusaders cruised to the sweep.

Victor paced the Crusaders in the sweep with a career-best 14 kills on .542 hitting, one of three Valpo players to reach double figures in kills.  Junior Janelle Hobbs (Hartland, Wis./Arrowhead) posted 11 kills on 14 swings without an error, good for a hitting percentage of .714, the fifth-best mark in a three-set match in Crusader history.  Hauch added 10 kills without an error as well, swinging at a .417 clip, as Valpo tallied 47 kills on .389 hitting as a team.

Freshman Kelsey Berrington (Britton, Mich./Tecumseh) handed out a season-high 38 assists in the winning effort, running the Crusader offense throughout the match.  Tekavec led Valpo in both aces and digs, registering season-highs in both categories with three aces and 12 digs.

In the Crusaders’ first match of the day, they were unable to gain the lead late in sets despite being close.  Valpo trailed by one just one midway through the first set at 15-14 and rallied back to within three at 20-17 after giving up a 5-1 run, but Mizzou scored five in a row to close the opener.

The second set saw the Crusaders jump out to a big lead by scoring the first six points of the frame, but the Tigers went on a 7-0 run when trailing 9-3 to re-claim the edge.  Valpo closed to within one point three times in the latter stages of the set and staved off one set point to move within 24-22, but a block closed out the second set in Missouri’s favor.  Then, in the third set, the Tigers reeled off five straight points with the Crusaders within 8-7, and Valpo got no closer than three points the rest of the way.

Junior Ellen Vanden Berg (Little Chute, Wis./Little Chute) paced Valpo against Mizzou with nine kills on .333 hitting, while sophomore Morgan Beil (St. Louis, Mo./Marquette) committed no errors on 19 swings, putting down eight kills to swing at a .421 clip.  Berrington and junior Ariel Cudney (LaPorte, Ind./LaPorte) each handed out 14 assists.  Senior Taylor Root (Jenison, Mich./Jenison) led the back line with 15 digs while Hauch picked up 13 of her own.

Valparaiso (5-5) closes out play at the MSU Eagle Challenge on Saturday afternoon against host Morehead State at 1 p.m. CDT.  Live stats for the match are available through www.valpoathletics.com.