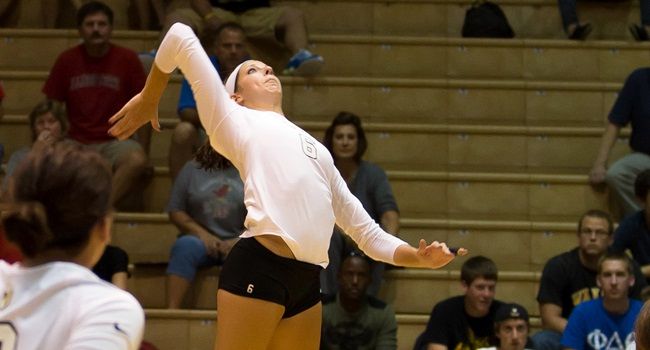 In a match which saw all four sets go down to the wire, it was Valparaiso which came out with its fifth straight victory, defeating Youngstown State Friday night 3-1 (25-22, 25-23, 23-25, 26-24) in Youngstown, Ohio to remain in second place in the Horizon League standings.

“It was a great match tonight between the two teams, with all four sets being close,” said Crusader head coach Carin Avery.  “It was definitely a hard-fought victory on the road – any win on the road is a good win.  We came up with some crucial blocks in the fourth set to pull out the victory.”

The first set was indicative of the way the match would go as a whole, as the teams combined for six lead changes and ten ties.  A 6-1 run midway through the set gave Valpo a 19-15 lead, but Youngstown State rallied with a 6-1 run of its own to go ahead 21-20.  Kills by junior Janelle Hobbs (Hartland, Wis./Arrowhead) and sophomore Morgan Beil (St. Louis, Mo./Marquette) returned the lead to the Crusaders at 22-21, but a YSU kill tied the frame at 22-all.

A Penguin service error returned the serve to the Crusaders with a 23-22 edge, and YSU then committed an attack error to give Valpo the first of two potential set point chances.  The Crusaders would need just one opportunity, however, as another kill from Beil ended the opening set in Valpo’s favor.

The second set looked like it would be all Crusaders early on, as multiple early kills from redshirt sophomore Kelsey Victor (Logansport, Ind./Logansport) and junior Ellen Vanden Berg (Little Chute, Wis./Little Chute) gave Valpo a 7-2 lead.  After the lead was pushed to seven points at 13-6, YSU scored five in a row to close to within 13-11.

But the Crusaders answered with four straight points of their own on kills from Beil, Victor and junior Sarah Dooms (Greenwood, Ind./Center Grove), as well as a block from Vanden Berg and Victor, to increase their advantage to 17-11.  The Penguins rallied to within one on numerous occasions at 19-18, 22-21 and 23-22, but every time, Valpo responded with a kill to push the lead back to two points.

Leading 24-22, an attack error followed by a YSU kill seemingly tied the frame at 24-all.  But during a Crusader timeout, it was discovered that the Penguins had served out of rotation starting at 21-22.  The resulting point deduction from YSU’s side of the scoreboard and addition to Valpo’s side made it 25-23 Crusaders and gave Valpo a two sets to none lead into the in-game break.

The third set looked like it would go Valpo’s way as well, as the Crusaders scored the first four points and cruised through the first half of the set with a significant advantage.  Valpo still led by four at 19-15, but Youngstown State flipped the script, scoring eight of the next ten to go ahead 23-21.  A kill from Beil brought the Crusaders back within one, and following a YSU kill, Victor came up with a termination to stave off one set point and bring Valpo to within 24-23.  But the Penguins’ Nichole Johnson came up with a kill to extend the match.

The fourth set ended up containing an incredible 17 ties and eight lead changes.  Valpo held an early 4-1 lead, the only time during the set that either side would lead by more than two points.  YSU was up 20-19 approaching the late stages of the frame, but an attack error, followed by a kill from redshirt sophomore Lindsey Hauch (Coloma, Mich./Coloma), gave the Crusaders a 21-20 lead.

The Penguins responded with three consecutive points to re-claim the advantage at 23-21, but Vanden Berg combined with senior Mary Dent (Chicago, Ill./Von Steuben) on a block and a YSU error tied things up at 23-all.  The Penguins earned a set point chance at 24-23 thanks to a Jackie Carlisle kill, but this time Dent combined with Beil on a rejection to send the frame into extra points.  A kill by Victor gave the Crusaders their first match point chance, and again the block came up big, as Hauch and Victor combined for the decisive rejection to close out the four-set win.

Victor paced the Crusaders with a career-high 15 kills on Friday while hitting at a .433 clip, one of three Valpo players to finish the night in double figures in kills.  Beil and Dooms added 12 kills apiece, while Vanden Berg posted nine as well.  Freshman Kelsey Berrington (Britton, Mich./Tecumseh) handed out 32 assists and junior Ariel Cudney (LaPorte, Ind./LaPorte) chipped in 19 assists.

Defensively, senior Taylor Root (Jenison, Mich./Jenison) led all players with 31 digs, her fifth effort of at least 30 digs this season within Horizon League play.  Dooms matched her career best with 24 digs for a double-double, while Berrington tallied 10 digs for a double-double of her own.  Hauch also reached double figures with 12 digs.  At the net, Vanden Berg and Victor were each in on a team-high five of the Crusaders’ ten team blocks.

Johnson and Missy Hundelt led Youngstown State (14-12, 4-8 Horizon) with 20 kills apiece, the former doing it on .600 hitting.  Erika West paced the Penguins with 25 digs, while Jenna Cavanaugh led all players with eight blocks.

Valparaiso (18-10, 8-3 Horizon) takes on league leader Cleveland State on Saturday afternoon at 3 p.m. CDT.  Live video through the Horizon League Network and live stats will be available at www.valpoathletics.com.