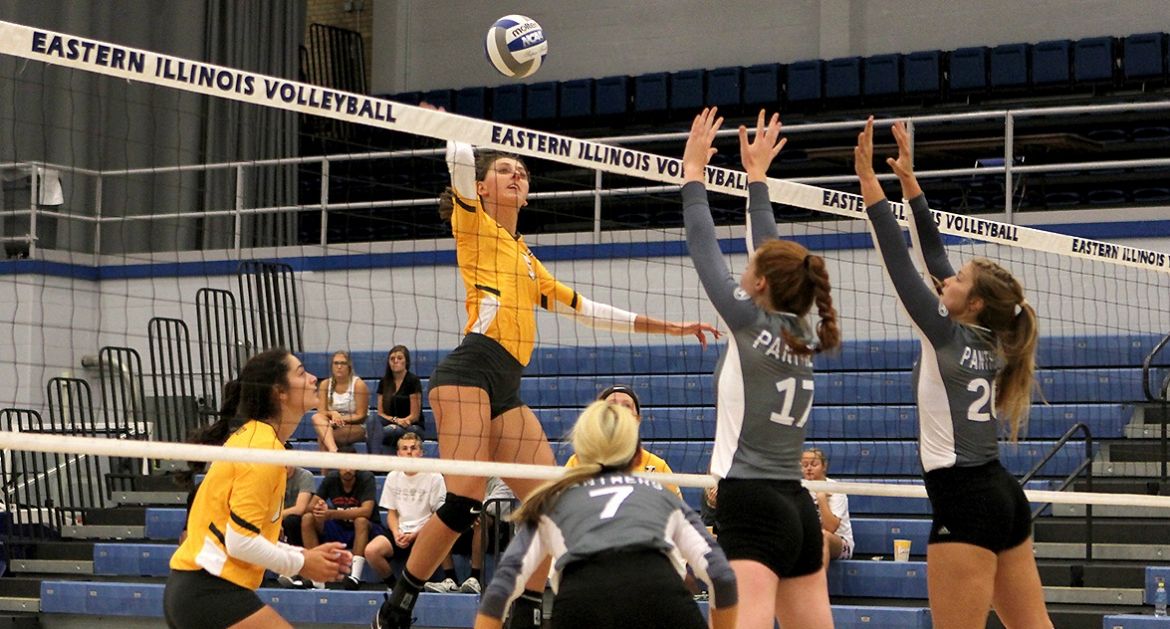 How It Happened – Iona
- Valpo looked to take control of the opening set, as a seven-point run on the serve of junior Alana Brown (Napa, Calif./Vintage) – which included three kills by Carlson – gave it a 14-9 lead.
- EIU battled back, however, and evened the set on three occasions past the halfway mark, the latest coming at 18-all. But that last tie was followed by a five-point spurt from the Crusaders with sophomore Brittany Anderson (East Chicago, Ind./Bishop Noll) serving as they took the opener.
- Iona jumped out to a quick 6-1 lead in the second set, but Valpo prevented the Gaels from extending the lead past five points at any juncture. The deficit was still 20-16 before Valpo reeled off five consecutive points on Anderson’s serve to take its first lead of the set.
- Iona scored the next two points before Valpo rattled off the next three, the last of which was a kill from Carlson which gave the Crusaders two set points at 24-22. The Gaels held off both those attempts to take the second set, as well as a third following a kill from sophomore Ally Cummings (Novi, Mich./Novi), but at 26-25, Valpo converted its fourth set point chance thanks to a Carlson kill to take the 2-0 lead.
- The third set proved to be academic, as for all intents and purposes, Valpo closed out the match with an early 9-0 run with sophomore Rylee Cookerly (Brownsburg, Ind./Brownsburg) serving which made its lead 13-4. The Crusaders hit .480 in the final set and did not commit an attack error.

How It Happened – Eastern Illinois
- Valpo went on a 6-2 spurt just past the midway point of the first set to pull ahead 19-15 before EIU answered with three straight points to cut the lead to 19-18. Out of a timeout, however, the Crusaders scored four straight – including a pair of kills from senior Allison Ketcham (Mishawaka, Ind./Marian) – and would trade sideouts the rest of the way to close the opener.
- The two sides were tied at 18 apiece in the second set before the Panthers went on a 7-2 run to finish out the frame and even the match at one set apiece.
- An early six-point run in the third set with sophomore Melissa Flynders (Mokena, Ill./Providence Catholic) serving gave Valpo the lead for good. EIU got no closer than four points in the second half of the set, but did stave off four set points at 24-16 before Anderson decided to end the set herself with a kill to make it 2-1 Valpo.
- The fourth set looked destined to be another close one, but Valpo made quick work of the second half of the frame. The Crusaders led just 14-12 before scoring five straight points – three of which were kills from Flynders – to push the lead to seven points. EIU briefly quelled the Valpo momentum with a kill, but six straight Crusader points followed, capped by a block from McCarthy and fellow sophomore Jaclyn Bulmahn (McCordsville, Ind./Mt. Vernon), to finish off an 11-1 run and the match.

Inside the Matches
- Valpo closed out its first three-win opening weekend since the 2015 season, when it went a perfect 3-0 at the Chattanooga Classic.
- Entering the day with 997 career digs, Carlson tallied the 1,000th dig of her career late in the first set of the sweep over Iona as she closed out the win with eight kills and six digs.
- Valpo’s 1,000 kill/1,000 dig club currently contains just eight members, but is poised to add two more this season, as Carlson is now just 108 kills away, while Ketcham is just 115 kills away.
- Limiting Iona to just eight points in the final set, it was the first time Valpo had held an opponent to single digits in a 25-point set since a 25-6 first-set win over Wright State on Oct. 23, 2015.
- Valpo reached double figures in blocks against the Gaels despite it being just a three-set affair, posting 10 rejections. Sophomore Peyton McCarthy (Cincinnati, Ohio/Seton) set a new career best with seven blocks, while Anderson tied her career high for the second straight day with five blocks.
- Offensively, Valpo committed just six attack errors against Iona, swinging at a .321 clip. McCarthy was errorless, matching Carlson with eight kills while hitting .571, while Bulmahn (seven kills, .467) and Cummings (six kills, .667) both enjoyed errorless matches on the attack as well.
- Anderson recorded her third straight double-double to open the season with 30 assists and 11 digs, while Cookerly paced Valpo with 15 digs.
- Ketcham enjoyed one of the best all-around matches of her career in the victory over EIU, posting a match-high 17 kills on .304 hitting while also picking up 22 digs in the back row. For the senior, it was her highest kill total since Nov. 21, 2015.
- Ketcham also continued her move up Valpo’s career digs chart, surpassing Angie Nordquist for eighth in program history in the category. She is now just nine digs shy of 1,500 for her career.
- Valpo’s attack was strong again in the win over the Panthers, as the Crusaders out-hit EIU, .238-.145. Senior Lizzie Zaleski (Oak Lawn, Ill./Marist) backed up Ketcham with 12 kills on .400 hitting, matching her career high in the category, while McCarthy added 10 kills. Bulmahn chipped in eight kills as well to tie her career high for the second straight day.
- Anderson narrowly missed another double-double with 49 assists and nine digs. Cookerly paced all players with 25 digs, while Flynders finished just one shy of her career best with 15 digs.
- Valpo finished in double figures in blocks for the third straight match, posting 11 rejections, led by six from McCarthy.
- All 14 Valpo players saw action in the match against Iona. Over the course of the four matches, all 14 players appeared in at least three sets, with 11 of the 14 playing at least 11 sets.

Thoughts From Coach Avery
“I’m happy with the way we played this weekend. We played hard, we played with energy and showed a lot of grit.”

“We were excited to have every person on the team play a role this weekend. It’s a long season, and it’s nice to see us have a lot of depth this year.”

Next Up
Valpo (3-1) continues early-season tournament play next weekend at the Chippewa Invitational in Mt. Pleasant, Mich. The three-match weekend opens with contests against DePaul and La Salle on Friday, Aug. 31.