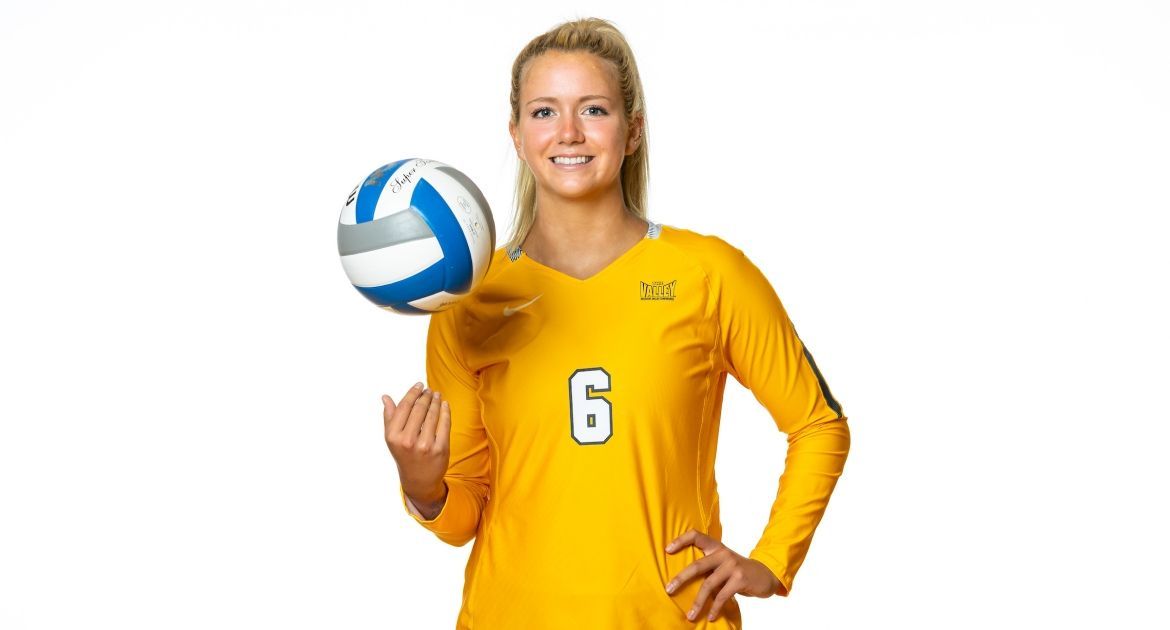 This Week in Valpo Volleyball: Coming off a thrilling tournament victory at the Golden Eagle Invitational last weekend, the Valpo volleyball team takes aim at a second straight tournament title this weekend as it travels to Toledo for the Blue & Gold Tournament. The Beacons will face Youngstown State and South Dakota State in addition to the host Rockets.

Previously: Valpo captured the Golden Eagle Invitational title at Tennessee Tech with a perfect 3-0 weekend, sweeping UNC Asheville before winning five-set showdowns with TTU and South Alabama. Peyton McCarthy was named tournament MVP and was joined on the All-Tournament Team by Brittany Anderson and Victoria Bulmahn.

Looking Ahead: Valpo’s final pre-conference action comes next weekend against Western Illinois and SIUE at the latter’s Cougar Classic.

Head Coach Carin Avery: In her 20th season as head coach at Valparaiso, Carin Avery has won 428 matches (428-208, .673) at the helm of the program and has led Valpo to three league regular season and tournament titles, as well as three NCAA Tournament appearances. A two-time league Coach of the Year, Avery has coached 55 All-League recipients over her tenure at Valpo. She is Valpo’s all-time leader in both victories and winning percentage, and owns a 483-232 (.676) record overall as a head coach.

Series History: Youngstown State - Friday’s matchup will actually be the first between YSU and Valpo as members of different conferences, as the two programs were previously both part of the Mid-Continent Conference (1992-2000) and the Horizon League (2007-2016). Valpo holds a 28-8 advantage in the all-time series, while the two teams split their season series in 2016 in the last meetings.

Toledo ­- A series which dates back to 1982, Valpo holds an 8-5 edge all-time over the Rockets. The last meeting came in Valpo in non-conference action in September 2015, a 3-1 Valpo victory.

South Dakota State - Valpo holds a 5-2 advantage in the all-time series over the Jackrabbits, including a three-set sweep at SDSU in September 2019 in the last matchup. This is the seventh time in the last 16 seasons Valpo and SDSU have met in an early-season tournament.

Scouting the Opposition: Youngstown State - The Penguins enter the weekend at 2-4 on the season after going 1-2 last weekend at the Chippewa Invitational. YSU, which posted a 3-11 mark in the spring, was picked 10th in the Horizon League preseason poll.

Toledo - The Rockets won IUPUI’s Hampton Inn Invitational last weekend and are currently 5-1 this year. Toledo went 6-14 in the spring 2021 season and was chosen to finish fourth in the MAC West Division this fall.

South Dakota State - SDSU won a pair of home matches last weekend to improve its record to 4-1 this season. The Jacks were projected to finish in seventh place in the Summit League preseason poll after going 6-11 this past spring.

Digging Deep: Valpo continued its long tradition of strong back row play in the spring 2021 season, finishing the season ranked third nationally and second in the Valley with 20.37 digs/set. Valpo has ranked among the top-30 nationally in digs/set in each of the last 10 seasons, including leading the nation with 20.03 digs/set in 2017 to go along with a fourth-place rank in 2010 and a sixth-place finish in 2015. Since the move to 25-point scoring, only seven teams have averaged more than 20 digs/set over the course of a season, and Valpo is the only program to have done it twice. 2018 saw Valpo lead the nation in a digs category as well, as it posted 2,613 total digs - a mark which not only ranked first nationally for total digs, but also set a program single-season record and a Division I record in the 25-point era.

Bringing Home the Trophy: Valpo earned its first trophy of the season last weekend at Tennessee Tech’s Golden Eagle Invitational, going a perfect 3-0 to claim the tournament title. It is the 26th in-season tournament title for the program under head coach Carin Avery.
The tournament title is the program’s first since the 2018 squad capped a stretch of three straight titles by defending its home court and winning the Crusader Classic.

McCarthy Named MVP: Fifth-year middle Peyton McCarthy led the way as the Beacons claimed the tournament title and was rewarded for her play by being named Tournament MVP, and later the MVC Player of the Week. For the three matches, McCarthy averaged a team-best 2.85 kills/set on .471 hitting and an even block per set. Her weekend was highlighted by an 18-kill performance on .607 hitting in the five-set win over host Tennessee Tech — the second-best hitting percentage in a five-set match in program history and the best in the 25-point era. It was McCarthy’s second Tournament MVP and fifth All-Tournament Team of her career.

Fifth Set is Ours: The fifth set has been a welcome sight for the Beacons so far this year. Four of their six matches have gone the full five sets, and in all four of those, Valpo has come out victorious. In both of the five-set wins this past weekend over Tennessee Tech and South Alabama, Valpo faced a match point and went on to win - the first known time in program history Valpo has faced a match point against it in consecutive matches and gone on to win both contests. Valpo has now won seven straight five-set matches dating back to last season, a streak which started immediately after a four-match losing streak in five-set matches ended.

Rallying From Down 2-0: Even more notable is the fact that in two of those wins, Valpo dropped the first two sets. In the season opener against UC Santa Barbara and the tournament finale this past weekend against South Alabama, the Beacons found themselves down 2-0 before rallying to eventually earn the 3-2 win. Valpo has come all the way back from a 2-0 deficit to earn a 3-2 victory 13 times now in the tenure of head coach Carin Avery.

Cookerly Continues to Dig: A preseason All-MVC selection and two-time MVC Libero of the Year, fifth-year Rylee Cookerly has gotten off to another stellar start this season. Cookerly averaged 4.77 digs/set in the trio of wins last weekend, picking up 25 digs apiece in the victories over Tennessee Tech and South Alabama. Cookerly, who finished last season ranked 10th nationally with 5.78 digs/set, moved into the NCAA’s career top-10 in digs during the TTU match and is just 16 digs away from second place in MVC history. She also is within striking distance (67 digs away) of moving all the way up to sixth place on the NCAA chart this weekend.

Freshman Steps Up: After being used primarily as a serving sub for a middle late in sets in her first five-plus matches in the Valpo uniform, Elise Swistek was critical to the attack as the Beacons earned the come-from-behind five-set win over South Alabama. Swistek started playing all six rotations late in the second set and delivered a kill late in the fourth set which gave Valpo set point at 24-21. Then in the fifth set, Swistek led the way for the Beacons with four kills, the last of which closed the match in Valpo’s favor. Swistek tallied seven kills in the match and picked up 14 digs as well.