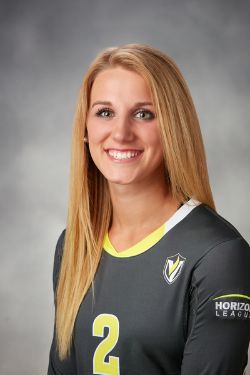 After two seasons of competition with the Valparaiso University volleyball team, Catherine Ament has been forced to step away from playing due to being medically unable to compete and will be considered a medical non-counter. Despite no longer being able to contribute on the court, Ament will remain a part of the Crusader volleyball program as a student assistant. Ament enters her second year as a student assistant in 2017.

2014: Appeared in 32 sets over 14 matches in her first year as a Crusader ... tallied 18 digs and a pair of service aces on the season ... debuted Aug. 30 at North Carolina Central with a season-best five digs ... recorded four digs in Horizon League play Oct. 3 at Youngstown State.

Prep: Two-time All-Conference honoree at New Prairie [Ind.] H.S. ... twice ranked among the top-15 in the state in digs ... finished her career as the program's all-time leader in digs ... helped New Prairie capture sectional and regional titles as a senior, the program's first-ever regional championship, as well as three conference titles over her four years ... played travel volleyball for Dunes Volleyball Club.