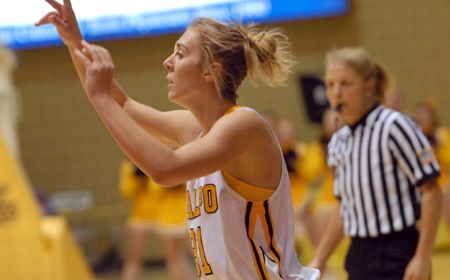 Aimee Litka scored 21 of her 26 points in the first half. (Ray Acevedo)
Valparaiso at Milwaukee | January 29, 2009
Related Links
Related Links

Aimee Litka (South Bend, Ind./Saint Joseph’s H.S.) scored 26 points and Valparaiso shot 56% from the floor on the way to an 83-65 victory over the University of Wisconsin-Milwaukee on Thursday evening at the Klotsche Center in Milwaukee, Wis.

Litka, who was two points off of her season high, made 6-of-9 three pointers and added five rebounds and five steals while dishing out three assists as the Crusaders avenged three losses against the Panthers a year ago, including a setback in the quarterfinals of the Horizon League Tournament.

“In this league it is hard to win on the road, added Freeman.  “To come in here and play like we did after Butler (a 77-44 loss) is a good step forward.”

The first half was all Litka for the Crusaders.  The junior was 6-of-9 from the floor, pouring in 21 points, bettering her season high by a point in just 20 minutes.  She made 4-of-5 from three-point range, including a triple as time expired in the stanza to put Valpo up 48-28 at intermission.

At the start it was Milwaukee with the hot hand, making eight of its first 11 shots from the floor to take a 19-15 lead eight minutes into the game.  From there, Litka took over, spearheading a 33-9 run to end the half.  She had 10 points with 11:18 left following a back door laying and a three-pointer to put the Crusaders on top 22-19.

Another triple by the senior and a pretty feed down low from Agnieszka Kulaga (Tarnow, Poland/I Liceum Ogolnoksztalcace H.S.) to Lauren Kenney (Mooresville, Ind./Mooresville H.S.) capped a 9-0 run to push the lead to 31-22 at the 8:38 mark.

The lead grew to 10 as Litka drained a triple with the shot clock expiring, and Kulaga added another three on the next possession.

The Crusader defense helped the offense as well, as Valpo recorded 11 steals in the opening 20 minutes while forcing 15 Panther turnovers.  The Brown and Gold capitalized on the takeaways, turning them into 20 first half points.

A steal by Kenney followed by her running the floor and getting it back for a laying made it a 17-point advantage in the final minute, and after one final theft, Litka drained a three from the corner to make the lead 20.

“I really liked the way we moved the ball the first half,” Freeman said.  “We made the extra pass.”

Valpo committed just six turnovers in the first half and shot 58% from the floor in building the halftime lead.

The Crusaders came out of the locker room and immediately added to the lead, scoring nine of the first 11 points to increase the advantage to 57-30 with just over 16 minutes to play in the game.  Valpo had two more steals during the run, and Litka added to her night with an assist to Launa Hochstetler (Berlin, Ohio/Hiland H.S.) for a triple.

Milwaukee made a run at the Crusaders over the next four minutes.  An 11-2 ouburst, keyed by Traci Edwards, cut the Valpo advantage to 59-41 with just under 12 minutes to play.

The Panthers, behind 16 points in 12 minutes from Edwards, kept creeping back, pulling within 14 with 10 minutes to go.

A Hochstetler triple with 7:30 to play extended the Valpo lead to 19, but Milwaukee scored seven straight points, and following a Markita Barnes three, had the Crusader advantage down to 71-59 with 502 to play.

Valpo made free throws to extend the lead back to 18 with three minutes to play before Milwaukee made one last run.  An Edwards basket inside and a triple by Jodie McClain made it 77-64 just a minute later.  The Crusaders made more free throws down the stretch to pull away with the victory.

Hohchstetler finished with 18 points for the Crusaders, including 14 in the second half, along with five assists and five steals.  Kulaga added 15 points and seven assists for the Brown and Gold.

Edwards finished with 30 points for Milwaukee (8-11, 3-5 Horizon League), including 21 points in the second half, while grabbing 16 rebounds.  She was the only Panther to finish in double figures as Barnes finished with nine.

The Panthers finished with 24 turnovers and shot 41% from the floor while making just 12-of-18 free throws.  Valpo, on the other hand, made 18-of-20 from the charity stripe.

“We did a good job of attacking their pressure tonight,” concluded Freeman.  “We had 19 assists which shows we played good team basketball.”

Valparaiso (10-8, 5-3) will wrap up its three-game road trip on Saturday afternoon when the Crusaders travel up the road to face Green Bay.  Tip-off against the Phoenix is set for 2 p.m. with all the action carried live on the Horizon League Network and on WVUR (95.1-FM, Valparaiso).

Game Notes: Kulaga moved into 20th place all-time at Valpo with 833 career points … Litka moved past Megan Newcomer (1996-2000) into sixth place all-time with 148 career three-pointers … Kulaga’s seven assists move her from 16th place into 13th place all-time with 230 career assists … 18 steals as a team mark a season high … Milwaukee leads the all-time series 8-3 … this was Valpo’s first win against the Panthers since December 5, 2001.