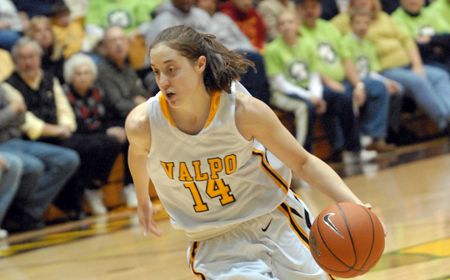 Valparaiso shot better than 60% from the floor in the first half and 52% for the game on Saturday afternoon as the Crusaders atoned for a earlier 33-point loss to Butler in Indianapolis by defeating the Bulldogs 75-65 at the Athletics-Recreation Center.

“We defended them a lot better this time (as opposed to the 77-44 loss on January 23),” head coach Keith Freeman  “We didn’t get into as many situations where we had to scramble on defense.  We didn’t let them get the ball in the paint.” said.

The Crusaders started the game hot from the floor, making six of their first seven shots to take a quick 12-4 lead just four minutes into the contest.  Butler responded with a 9-0 run that put the Bulldogs on top for the only time on the afternoon, 21-18, following a three-pointer by Candace Jones.

Valpo answered with a 16-5 run, including five points from Ashley Varner (South Bend, Ind./Washington H.S.) and a pair of three-pointers by Aimee Litka (South Bend, Ind./Saint Joseph’s H.S.) to retake the lead for good, a give the Brown and Gold a 34-26 lead with 4:36 to play before intermission.

Butler would cut the lead in half before the Crusaders took a 42-32 lead into the locker room.

After the Bulldogs scored the first basket of the second half, a 10-2 Valpo run, eight of which came from Launa Hochstetler (Berlin, Ohio/Hiland H.S.), gave the Crusaders their largest lead of the game, 52-36.

“I was really pleased with Launa,” added Freeman.  “That was a big time performance.  She made some big plays tonight.”

Butler answered with nine straight points to close within seven, but Valpo would have an answer every time the Bulldogs would look to creep even closer.  Brittany Bowen’s three-pointer brought Butler within 59-53 with 8:42 to play, but Agnieszka Kulaga (Tarnow, Poland/I Liceum Ogolnoksztalcace H.S.) answered with a triple of her own.  Bowen cut the lead to five with 4:34 to play, but again Kulaga stepped up, hitting a fall-away jumper to make it a three possession game again.

“Aggie hit a couple of big shots, including the three,” said Freeman.  “She was very focused on defense as well.”

Katie Emig (Farmington Hills, Mich./Birmingham Marian H.S.) scored down low on the next possession to increase the lead to nine and the Crusaders made 9-of-10 free throws in the final 3:03 to secure the victory and move into sole possession of fourth place in the Horizon League standings.

“Katie gave us some big minutes off of the bench,” said Freeman.  “We made free throws too, which were a big part of this game.”

Hochstetler led all scorers with 24 points and grabbed a team-high six rebounds for Valpo while dishing our four assists.  Litka added 13 points, 10 in the first half, while Kulaga had 11 points and five boards.  Hochstetler and Kulaga both played all 40 minutes for the Brown and Gold.

Valpo committed just 11 turnovers on the night, including just four in the opening 20 minutes and held a 32-26 advantage scoring in the paint.  Butler did out rebound Valpo, 34-29, including 15-7 on the offensive end.

“Today we had some teamness both defensively and offensively,” concluded Freeman.  “Thursday will be another challenge in this league.”

Valparaiso (14-11, 8-6 Horizon) will continue its homestand on Thursday evening, as the Crusaders entertain first place Green Bay.  Tip-off is set for 5:30 p.m. at the ARC with all the action carried live on the Horizon League Network as well as on WVUR (95.1-FM, Valparaiso).

Game Notes: The game was a “WBCA Pink Zone” game in which both teams had pink warm-ups on in support of the fight against breast cancer … Kulaga has scored in double figures in five straight games and Hochstetler has reached double digits in six straight games … Kulaga passed Heidi Diefenthaler (1992-1996) for 16th place all-time at Valpo with 899 career points … Litka passed Michelle Russell (1991-1994) for 18th place on the scoring list with 886 points … Hochstetler tied Shari Toelke (1990-1994) for fifth on Valpo’s career assist list as her four helpers give her 340 for her career … Butler leads the all-time series 16-5 but the teams have split 2-2 since Valpo joined the Horizon League … Butler entered the game allowing just 49.4 points per game in Horizon League play and had held 10 of the previous 13 opponents below 50 points.