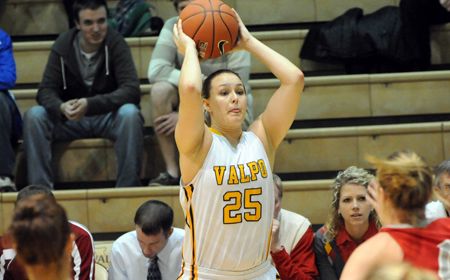 The Crusaders fought back from an eight-point deficit to take a lead late in the second half in a game which was a defensive battle from the start.

“Tonight we played hard, worked hard on nearly every defensive possession, and executed the game plan the way we wanted, but just needed more shots to go down,” head coach Keith Freeman said of the near upset.  “We played better half court man-to-man defense tonight than we have in the last three years.”

Trailing by five, 22-17 at the half, Valpo hung around during the first six minutes of the second half before closing within three, 30-27, following a pair of baskets by Whitney Farris (Kokomo, Ind./Kokomo H.S.).  After a pair of Tiger free throws, the junior then hit a triple with 10:45 to play to close within two, the closest the Crusaders had been since 9-7 with 13-and-a-half minutes to play in the first half.

KeKe Carrier, Auburn’s 6-foot-7 center, answered with a three-point play in the paint before a pair of Betsy Adams (Monticello, Ind./Twin Lakes H.S.) triples, sandwiched around an Auburn basket, brought Valpo within one with 9:25 to go.

Laura Richards (Connersville, Ind./Connersville H.S.) then grabbed a loose ball offensive rebound after a desperation heave as the shot clock ran down, keeping the play alive and drew a foul.  Her two free throws gave Valpo its first lead of the game, 38-37, with 7:58 to play.

The freshman point guard then drilled her first collegiate three-pointer on the next possession, increasing the advantage to four.

With the lead still at six, 47-41, with three-and-a-half to play, Jordan Greenleaf started what would turn out to be a 10-0 Auburn run.  Carrier added two free throws and a jumper by Alli Smalley with 1:55 to play, tied the game at 47.  For Smalley, that would be her only field goal on a 1-of-12 shooting night for the Tigers’ leading scorer entering the game.

“Laura Richards did a great job on Smalley, holding her to 1-of-12 shooting,” Freeman added.  “She is one of the best shooters in the SEC.”

Carrier gave Auburn the lead with a basket inside with 1:15 to play and Morgan Toles jumper with 26.2 seconds to play pushed the Tigers’ lead to four, 51-47.

Valpo continued to fight, as Farris scored with 10.0 to play to cut the deficit in half.  After a foul, Smalley missed the front end of a one-and-one and Varner grabbed the ball and threw an outlet pass to Richards who pushed the ball up the floor, driving to the basket.  She drew a foul as the horn sounded, and after a look at the replay, 0.2 seconds were added to the clock.  She made the first of the two-shot shooting foul, but the second rimmed out as the game ended.

The game started as a defensive struggle from the outset, with Valpo making just three of its first 19 shots from the floor.  After Auburn started 3-of-6, the Crusader defense limited the Tigers to just one field goal in its next 12 shot attempts as Valpo stayed within five to seven points most of the half.

Auburn’s lead grew to eight, 22-14, but Valpo stiffened, holding the Tigers scoreless the final 5:15 of the stanza to go into the locker room down just five.

Farris and Adams both led Valpo in scoring with 12 points each while Varner and Richards tallied eight a piece.  Varner pulled down a team-high eight rebounds while Richards, who had a career high in scoring, also tallied career bests with seven rebounds and five assists.  The freshman played 39 minutes and did not commit a turnover.

Valpo shot 32% from the floor after making just 6-of-29 (21%) in the second half, and was 7-of-30 from three-point range (23%).  The Crusaders committed just six turnovers, but the solid defense did not allow any of them to result in points for the Tigers.

The Tigers shot just 33% from the field for the game and were 0-of-9 from three-point range.

Valparaiso (3-7) will return to the hardwood in San Diego on Wednesday evening in the consolation game of the Surf ‘n Slam Tournament as the Crusaders take on Wake Forest.  Tip-off is slated for 5 p.m. CST.

Game Notes: This was the first meeting ever between Valpo and Auburn … this marked the third game the Crusaders have ever played against a Southeastern Conference opponent … Richards had just five career points before scoring eight on Monday night … Farris’ 12 points were a season high and the first time this year she tallied double figures … Valpo’s six turnovers marked a season low, with Auburn entering the game forcing 17.3 per contest … Varner tied a career-high with three blocks, and has 12 on the season after entering the year with just 14 in her career … host San Diego state won the first opening round game 63-62 against Wake Forest.