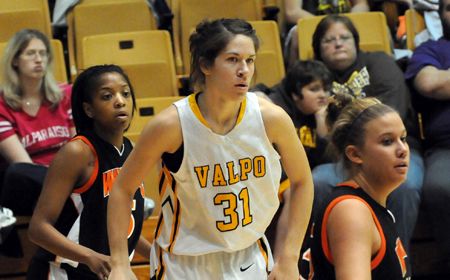 A 15-0 run by Wake Forest late in the first half proved to be the difference on Wednesday evening as the Demon Deacons captured the consolation game of the San Diego Surf ‘n Slam with a 52-34 victory over Valparaiso in San Diego, Calif.

Wake Forest started hot from the floor over the first three-and-a-half minutes, making five of its first six shots, including 3-of-3 from long range to take a 13-4 lead.

Valpo’s defense stiffened, not allowing the Demon Deacons to score over a span of 7:26 to pull within three.  Ashley Varner (South Bend, Ind./Washington H.S.) tied the game at 16 with a triple at the 7:30 mark.

The Crusaders would go cold from the floor though, not scoring a basket from the field until 23 seconds remaining.  Meanwhile, Wake Forest scored 15 straight points over a four minute stretch to build a 31-16 advantage and took a 33-20 lead into the locker room.

Valpo shot just 17.4% in the second half and 23.8% for the game.  Betsy Adams (Monticello, Ind./Twin Lakes H.S.) led the Crusaders with eight points while Varner had seven.

"They pressured us hard man-to-man and we struggled to get good shots," head coach Keith Freeman said.

The Demon Deacons were held to 18.5% shooting in the second half, but outrebounded the Crusaders 46-30 for the game. Brittany Waters led Wake Forest (9-4) with 19 points while Sandra Garcia had 10 points and 10 boards.

"We need to try and take steps forward now," Freeman added.  "Saturday starts a new season for us."

Valparaiso (3-8) has closed out its five-game road trip and will return to the Athletics-Recreation Center on Saturday afternoon as the Crusaders host UIC in the Horizon League opener.  Tip-off is set for 1:35 p.m.

Game Notes: This was the second meeting between Valpo and Wake Forest with the Crusaders winning the initial contest in December of 2001 … all 13 Crusaders saw action in the game … Valpo was just 3-of-21 from three-point range.