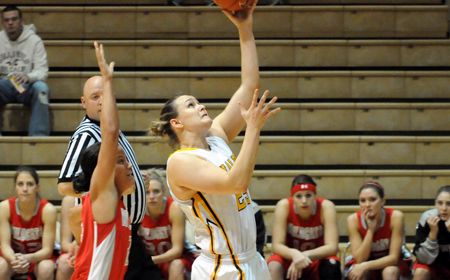 A 21-2 run midway through the first half opened up the game on Thursday evening as Green Bay went on to defeat Valparaiso 69-44 at the Athletics-Recreation Center.

The Crusaders committed 26 turnovers and shot just 34.9% against the Phoenix, which moved into a share of the Horizon League lead with Butler.

“Their pressure is going to make you cut and you’re going to have to execute at a high level,” head coach Keith Freeman said.  “We were slow and didn’t do that.”

After Green Bay opened the game scoring the first five points, Valpo battled back, taking a 6-5 lead on an Ashley Varner (South Bend, Ind./Washington H.S.) lay-in at the 16:06 mark.  The game would then be tied at nine before Green Bay scored 21 of the next 23 points to take a 30-11 lead with six minutes to play in the first half.

Six straight turnovers out of intermission allowed the Phoenix to score the first nine points of the half, and the Crusaders were not able to cut the deficit under 20 the rest of the way.

“Green Bay is a very talented team,” Freeman concluded.  “They have three core players to lead them.”

Valparaiso (7-19, 4-11) will close out the home portion of the regular season on Saturday afternoon hosting Milwaukee at the ARC for Senior Day.  Tip-off is set for 1:35 p.m.