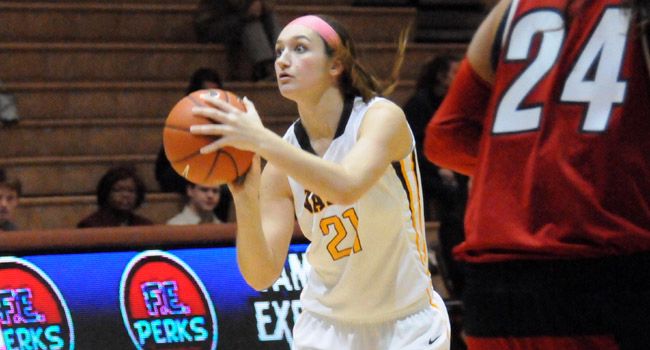 Junior Tabitha Gerardot (Fort Wayne, Ind./Canterbury) posted her eighth double-double of the season and all 11 Crusaders scored, including a career-high 13 from freshman Lexi Miller (Caledonia, Mich/Caledonia) as Valparaiso outscored UIC by 32 in the second half to post an 88-62 win on Saturday in the annual Play 4Kay game to benefit breast cancer research.

Gerardot scored 18 points, including 12 in the first half, and pulled down 14 rebounds for the 21st double-double of her career. She was 6-of-10 from the field and 5-of-5 at the free-throw line.

Miller finished 4-of-7 from the floor, including 3-of-4 from 3-point range. She banked in a 3-pointer just outside half court to beat the halftime buzzer and send Valpo into the break down 39-33.

“It gave us a big boost going into halftime,” Crusader coach Tracey Dorow said of Miller’s shot. “I felt like that just lightened the mood for us and helped us relax a little bit. We went into the locker room and came out a totally different team.”

Freshman Jessi Wiedemann (Palatine, Ill./Fremd) made a jumper and then Gerardot scored four-straight to the game at 52. Senior Gina Lange (Wyoming, Minn./Forest Lake) gave the Crusaders their first lead since early in the first half with a pair of free throws.

Senior Laura Richards (Connersville, Ind./Connersville) added to the lead with a layup, junior Liz Horton (Cannelburg, Ind./Barr-Reeve) followed with a drive to the hoop. Scott tacked on back-to-back baskets to build the lead to 62-52.

After a UIC basket from Taylor Foulks, Richards drained 3-pointers on consecutive possessions, and Miller followed with two free throws to push the lead to 16. Over the final four minutes, the Crusaders added to the lead, pushing the final margin to 26.

Lange, who scored 13 points in the second half, was the third Valpo player in double-figures with 15. Scott and Richards each added eight, with Richard also grabbing nine rebounds and dishing out five assists. Richardson chipped in with seven, and sophomore Jessica Carr (Arcadia, Ind./Hamilton Heights) finished with six on 6-of-6 shooting at the free-throw line.

Valparaiso tied a season-high with nine made 3-pointers, and for the first time this season, every player who dressed scored at least two points.

“I thought everyone did a great job bringing energy, it was a team effort all around,” Dorow said.

The Crusaders outscored the Flames 55-23 in the final 20 minutes. Valparaiso finished with a 48-27 rebounding edge. Eight different players notched an assist, as the team finished with 18 on the afternoon.

Valpo led 7-6 early in the first half before UIC went on a 10-0 run, holding Valpo without a point for seven minutes. Rachel Story had a pair of baskets on the run for the Flames.

Miller came off the bench to hit all of her 3-pointers in the first half. The Crusaders trimmed an 11-point deficit to two at 28-26 with 3:39 to go in the half. The Flames built it back up to nine before Miller banked in her half-court shot to send the Crusaders to the locker room with momentum.

Valparaiso (9-14, 4-6), which improves to 7-3 at the Athletics-Recreation Center, closes up a two-game home stand when the Crusaders host Milwaukee at 7:05 p.m. on Thursday, Feb. 21. Links for live audio from WVUR-FM 95.1, as well as live video from the Horizon League Network and live stats will be available at www.valpoathletics.com.