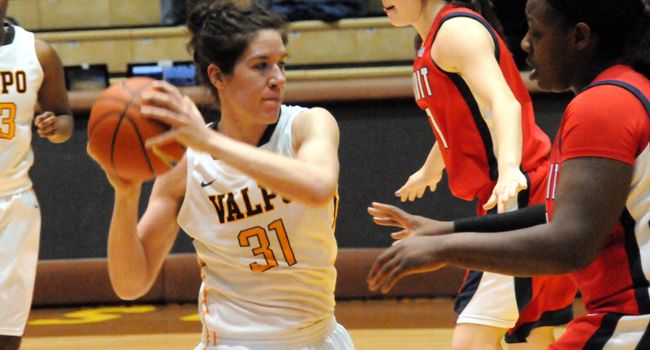 Senior Gina Lange (Wyoming, Minn./Forest Lake) scored a game-high 20 points and senior Laura Richards (Connersville, Ind./Connersville) tied a career-best with 11 rebounds, and Valparaiso outscored Detroit by 23 in the second half to get a 73-53 victory on Senior Day on Saturday afternoon at the Athletics-Recreation Center.

The victory clinches the No. 8 seed for the Crusaders. Valparaiso will host UIC in the first round of the Horizon League Tournament on Monday night at 7 p.m.

“Defensively, we were much better in the second half, and I am really proud of that,” Crusader head coach Tracey Dorow said. “We played really well both ways in that second half. It was one of the best 20 minutes we have put together this year.”

The two teams traded baskets over the opening seven minutes of the second half. Rosanna Reynolds put Detroit ahead 47-44 with 12:51 to go. Lange followed up with back-to-back buckets to give the Crusaders the lead for good. Her first hoop came in transition after a steal from freshman Jessi Wiedemann (Palatine, Ill./Fremd). Her second basket gave the Crusaders the lead 48-47 with 10:32 left.

Junior Tabitha Gerardot (Fort Wayne, Ind./Canterbury) followed with an offensive rebound and putback. Lange had two baskets, and Wiedemann closed out a 12-0 run with a steal and layup. Wiedemann finished with a career-high 13 points.

Four-straight points from Shareta Brown trimmed the Valpo lead to five at the 5:01 mark. Valparaiso closed the game on a 17-2 run. Sophomore Jessica Carr (Arcadia, Ind./Hamilton Heights) started the run with a pair of free throws. Richards followed with a 3-pointer from the corner to put the Crusaders up 61-51.

Sophomore Shaquira Scott (Wilmette, Ill./Loyola Academy) put Valpo up 12 with a basket. Then Lange followed with four points, while Wiedemann, freshman Lexi Miller (Caledonia, Mich/Caledonia) and Scott each had two points in the final 80 seconds.

Lange was 7-of-12 from the field and 5-of-6 at the free throw line for her second 20-point game of the season. Gerardot scored 14 points, and Richards totaled six points, a career-high tying 11 rebounds and five assists.

Carr finished with eight points, and Scott added seven points and eight rebounds. Valparaiso had a 42-27 rebounding edge for the contest.

“We really focused on blocking out and making it hard for them to get the easy board,” Dorow said. “They still rebounded the ball in the first half, but we rebounded much better in the second half. We tracked the ball much better and pursued it much better at both ends.”

Detroit led 14-12 early in the contest, but the Crusaders built an eight-point lead with a 10-0 run. Gerardot had eight of her 12 first-half points during the run. She had a pair of baskets, and after two Lange free throws, followed that up with two more baskets.

The Titans reeled off 11-straight points to retake the lead at 25-22 with 7:46 left. Demeisha Famrbo, Brown and Audrey Matteson each had 3-pointers during the run.

Detroit built the lead up to six, but Scott drained a 3-pointer with 18 seconds left to cut Detroit’s lead to three at halftime.

Valparaiso (10-19, 5-11) will host a Horizon League Tournament game for the third time in school history. The Crusaders will be looking for their first-ever home HL Tournament win at 7:00 p.m. on Monday, Mar. 11. The game can be seen live on the Horizon League Network. Links for the live video and live stats will be available on www.valpoathletics.com.