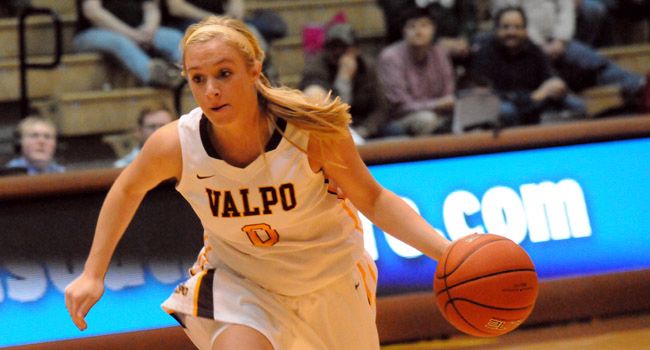 Senior Charae Richardson (Lafayette, Ind./Jefferson [Vincennes]) dropped in 18 points versus Western Michigan Sunday afternoon, but the Broncos utilized a 21-2 run to open the second half to seal a 72-50 victory at the ARC.

Injuries have played a major factor thus far for the 2013-14 Valpo women's basketball team. And just as one Crusader was getting back onto the floor, another was relegated to the bench. Junior Jessica Carr (Arcadia, Ind./Hamilton Heights) made her season debut Sunday just as sophomore Lexi Miller (Caledonia, Mich./Caledonia) is dealing with the after effects of a concussion sustained earlier this week. Carr missed the first ten games as she recovered from hand injuries suffered in an automobile accident this past September.

Head coach Tracey Dorow refuses to use injuries as an excuse, though.

"We simply have to play better as a team. I thought we had some good practices these past two weeks, but for whatever reason it's not translating onto the court during games," Dorow said.

The first ten minutes of the game saw multiple lead changes. Richardson accounted for eight of the Crusaders' first nine points of the tilt.

Valpo took a 16-15 lead on Carr's first shot of the season, a three-pointer from the top of the key. The trey represented the last time the Crusaders were in front, however.

Western Michigan responded with a 17-4 surge thanks in large part to three jumpers from Marquisha Harris. Six of her eight points came during the nearly seven-minute run.

The Broncos took a 37-27 lead into the locker room.

Turnovers on back-to-back possessions in the opening minutes of the second half allowed the Broncos to extend the margin to 17. A flurry of offensive rebounds then pushed the game wide open as Western Michigan held a 58-29 advantage with 12 minutes to play.

Liz Horton's (Cannelburg, Ind./Barr-Reeve) ninth three-pointer in the month of December drew the Brown and Gold to within 17 again, but that was as close as it would get as Western Michigan downed Valpo 72-50.

For the Broncos, it was their third win over a Horizon League team in as many games. Valpo was held to 50 points on its home floor for the second straight game.

Richardson finished the afternoon 7-of-14 from the field and grabbed a team-best six rebounds. The fifth-year senior has recorded at least 16 points in three of her last five games.

Valparaiso (2-9) will close out the calendar year with a New Year's Eve showdown against South Dakota (7-6) at the ARC. The Crusaders and Coyotes tipoff at 1:35 pm CT.