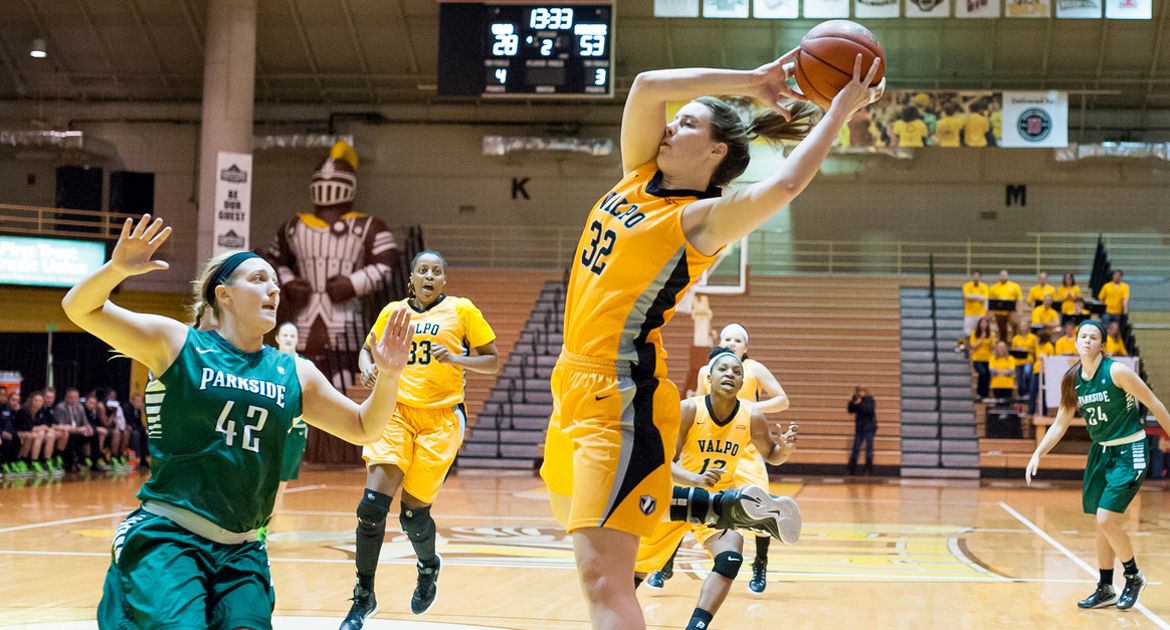 Next Up in Crusader Basketball: Valparaiso opens the 2014-15 season on Friday night as the Crusaders take on Butler at the Athletics-Recreation Center in a 5:00 p.m. tip. Friday’s game represents the second time in the last three seasons that the Brown and Gold have opened the season on the home.

Last Time Out: Inexperience played a key role in Valpo’s 69-52 exhibition loss to Wisconsin-Parkside on Nov. 1st at the ARC. Five Crusaders played their first competitive game on Homer Drew Court while injuries sidelined Lexi Miller and Jessi Wiedemann. The Rangers came out firing, using an 11-0 run to establish a comfortable first-half lead, and the Brown and Gold were unable to cut the gap. Sharon Karungi gathered 13 rebounds but her lone point came from the charity stripe.

Head Coach Tracey Dorow: Tracey Dorow (17-45) is in her third season at the helm of the Valparaiso women’s basketball program in 2014-15. In her first season, Dorow led the Crusaders to eleven victories overall, including five in Horizon League play. Dorow arrived in Valparaiso after 14 seasons at Ferris State. She compiled a 232-163 record while with the Bulldogs. Furthermore, Ferris State posted the #1 grade point average in all of Division II for the 1999-2000 women’s basketball season as well as the #2 ranking in 2002-2003.

Series Notes: This will be the 30th meeting between Valpo and Butler, with the Bulldogs owning a 22-7 advantage. Butler edged the Crusaders 65-50 at the ARC last December.

Storylines...
- A Crusader victory Friday night would give head coach Tracey Dorow 250 career wins.
- Friday is the 30th meeting between the in-state rivals.
- This is the third time the Valpo and Butler women have met since the Bulldogs left the Horizon League.
- The Bulldogs last won at the ARC on December 13th, 2013.
- Butler’s Blaire Langlois and Valpo’s Abby Dean were teammates at Carmel High School.
- Valpo has won four straight when opening the season at the ARC.

@ValpoWBB...
...looking back at last season
- @ValpoWBB.wrapped up 2013-14 with three wins at the Athletics-Recreation Center.
- @ValpoWBB were champions of the Toledo Invite, defeating Chicago State and the host Rockets.
- @ValpoWBB’s Liz Horton signed a contract to play professionally with Germany’s TG Neuss following a senior season where she averaged 10.9 points/game and recorded the 9th-highest three-point field goal percentage in a season in school history (39.8%).
- @ValpoWBB shot 77.6% from the free-throw line, the highest percentage ever by a Crusader team.

@ButlerWBB
- @ButlerWBB finished 2013-14 with a 15-16 record and a 10-8 mark in the Big East.
- @ButlerWBB welcomes a brand-new coaching staff (including head coach Kurt Godlevske) and six new players to its program
- @ButlerWBB will be without Loryn Goodwin and Lexus Murry in its opener. Both are serving temporary suspensions for violating team policy.
- @ButlerWBB won its exhibition opener over Northern Michigan, 67-47. The Bulldogs shot 14-for-15 (93.3%) from the line and tallied 17 steals.
- Goodwin recorded a double-double (16 pts., 10 rebs.) in that contest held at Hinkle Fieldhouse.

Lexi Miller
- One of two Crusaders to finish with more assists (59) than turnovers (56) last season.
- Made collegiate debut against the Indiana Hoosiers Nov, 9th, 2012.
- Made first start in Hinkle Fieldhouse versus Butler.

Jessi Wiedemann
- Has appeared in all 62 games since arriving to Valparaiso.
- Canned multiple three-pointers in 13 games last season.
- Made collegiate debut versus Indiana
- Registered a career-high 21 points vs. Cleveland State on 1/27/14.

Roster Breakdown
- Valpo welcomes four new faces (all freshmen) to its team this season.
- The Brown and Gold boast players from eight different states and two countries.
- Faith Miller is the only true sophomore on this year’s squad.
- The Crusaders possess five players 6’0’’ or taller.