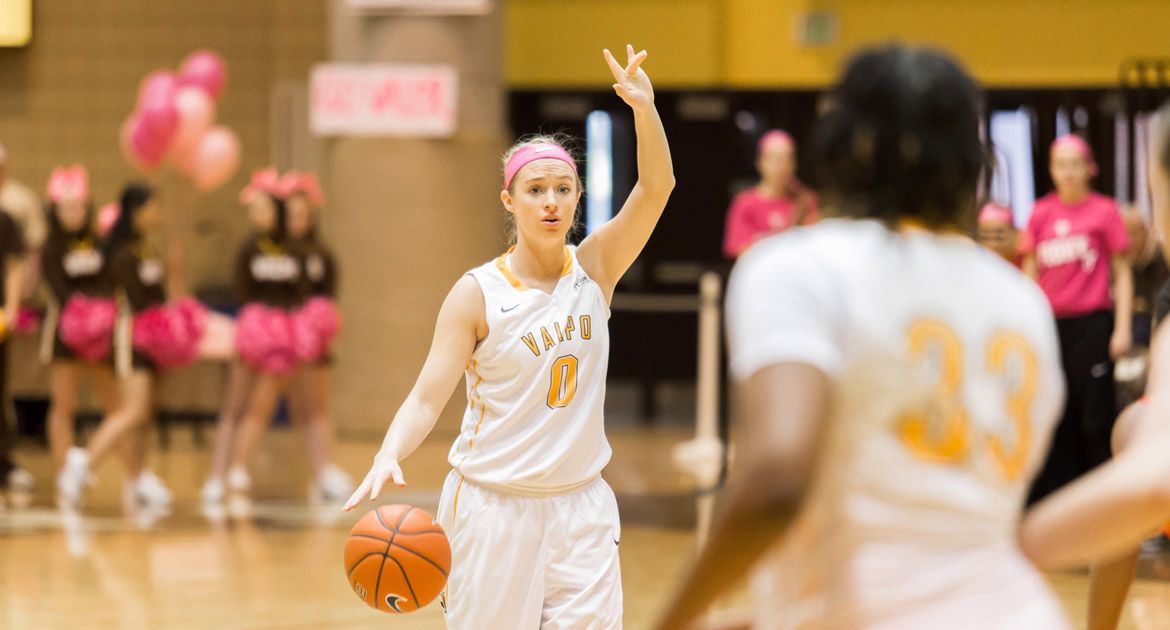 Next Up in Crusader Basketball: The Crusaders’ first stop on their final road trip of the 2014-15 regular season takes them to Rochester, Michigan to face the Oakland Golden Grizzlies on Thursday evening. Oakland, who will be celebrating its Senior Day at the Athletics Center O’Rena, can help its chances of avoiding the play-in game of the 2015 Horizon League Tournament with a win.

Last Time Out: Senior Sharon Karungi and freshman Jasmyn Walker both posted double-doubles, but Detroit shot 50% from the field to claim a 78-57 victory over Valpo on Saturday afternoon at the Athletics-Recreation Center. All five Detroit starters finished in double figures as the Titans moved into a tie for fifth place with UIC. Walker scored 18 points to go with 10 rebounds, tying her second-highest point total in Horizon League play.

Head Coach Tracey Dorow: Tracey Dorow (23-66) is in her third season at the helm of the Valparaiso women’s basketball program in 2014-15. She collected her 250th career victory on November 14th, 2014 after a 91-57 walloping of Butler. In her first season, Dorow led the Crusaders to eleven victories overall, including five in Horizon League play. Dorow arrived in Valparaiso after 14 seasons at Ferris State. She compiled a 232-163 record while with the Bulldogs. Furthermore, Ferris State posted the #1 grade point average in all of Division II for the 1999-2000 women’s basketball season as well as the #2 ranking in 2002-03.

Storylines
- No Horizon League team has played fewer home games than Oakland (12).
- The Golden Grizzlies are averaging 7.6 three-pointers/game. Seven of Valpo’s last eight opponents have made at least that many versus the Crusaders.
- Dani Franklin has yet to be held to fewer than 10 points in three straight games. She scored seven versus Cleveland State two games ago and four versus Detroit last time out.