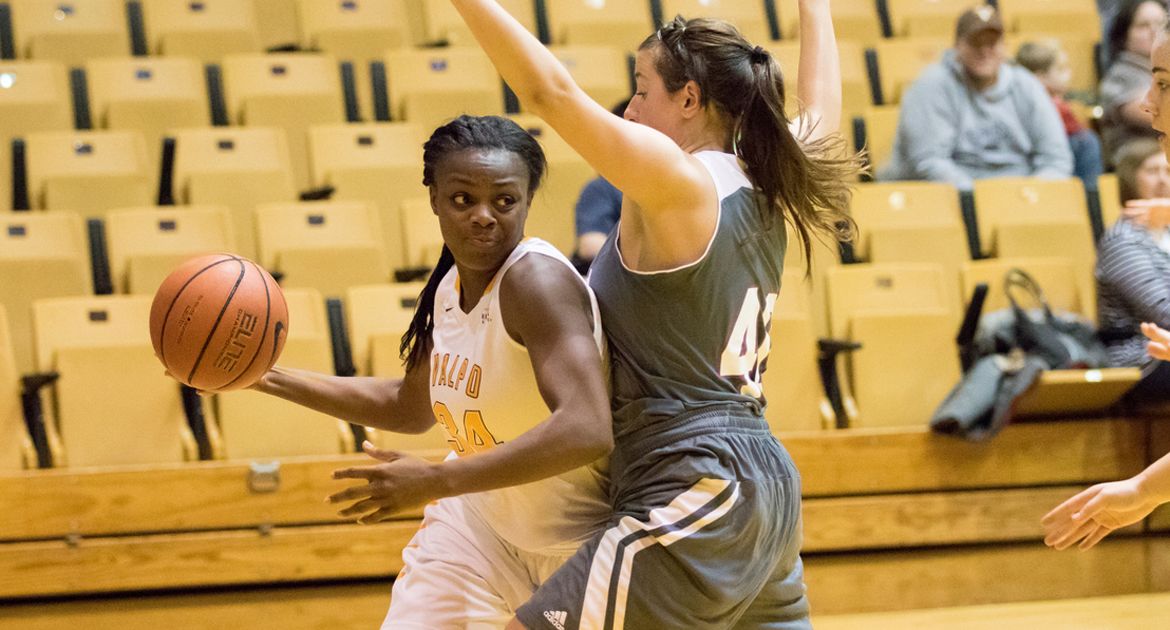 Dani Franklin (Cedar Rapids, Iowa/George Washington) and Jasmyn Walker (Muskegon, Mich./Mona Shores) combined for 40 points Friday afternoon, but Wright State pulled away late for an 80-63 win over the Crusaders at the Nutter Center.

Walker logged seven of her season-high 19 points in the first quarter as the Brown and Gold enjoyed an 11-10 lead after ten minutes. The first shot out of Kim Demmings' hands caught nothing but nylon - a triple just ten seconds in - but the Raiders misfired on their next six field goal attempts. Valpo, meanwhile, scored on three straight possessions just after the midway point of the period. The Crusaders endured a short field-goal drought of their own before Franklin hit a jumper with 30 seconds to go for a one-point advantage.

Valpo shot exceptionally well from the perimeter in the second quarter. After Wright State scored the first seven points of the period, Meredith Hamlet (McBain, Mich./McBain), Franklin, and Hannah Schaub (Brooklyn Park, Minn./Park Center) all dialed it up from long distance as WSU's edge eroded from eight points to one. Valpo connected on four of its seven attempts from the perimeter in the second quarter.

Walker's attempt to complete an and-1 rimmed out with 2:20 left in the first half. The free-throw would have knotted the game at 28-28. Instead, it signaled the beginning of a 25-6 Raider swing.

The Raiders closed the first half on an 8-0 run. Mackenzie Taylor knocked down a three-pointer two seconds ahead of the halftime horn, to give Wright State its largest lead at that point, at 40-29.

Valpo found itself down by as many as 20 points in the third quarter, but Franklin and Walker stepped up when called upon. The sophomore duo accounted for ten points in a 12-0 surge that made it 53-45 with 2:25 on the third-quarter clock.

Antania Hayes and Lexi Smith brought a halt to the spurt with a pair of quick baskets to re-establish a double-digit advantage for the Raiders. Just when it appeared as though Wright State might run away with it, the Crusaders roared right back. Valpo rattled off the last six points of the stanza to draw it to 57-51 after three quarters.

The margin was as thin as five points with 4:30 left in regulation, but Valpo landed just two of its final eleven shots from the field. While the Crusaders endured untimely shooting struggles, the Raiders successfully converted nine of their eleven free-throw tries in the game's final ten minutes.

The contest represented bold progress over last season's 95-66 lopsided affair in Dayton. Franklin, who has averaged 19.3 PPG in three career contests against Wright State, set season watermarks in field goals made (8) and points (21). Walker posted one of her best shooting performances of the season - 8-for-11 for 19 points - to finish one point shy of her career high. Franklin and Walker squeezed six boards each.

Freshman Emily Vogelpohl led Wright State in nearly every column Friday. She tallied 20 points, eight rebounds, six assists, and five steals. Smith was 5-for-5 from the field and 8-of-9 from the charity stripe to pitch in 18 points off the bench.

The loss marked the end of the Brown and Gold's longest winning streak in eight seasons. Valpo (5-8, 1-1 Horizon) will aim to start a new one Thursday night versus Detroit (4-7, 0-0 Horizon). Tip time is scheduled for 7:00 pm CT from the Athletics-Recreation Center. Links to the audio, video, and live stats will be posted at ValpoAthletics.com.