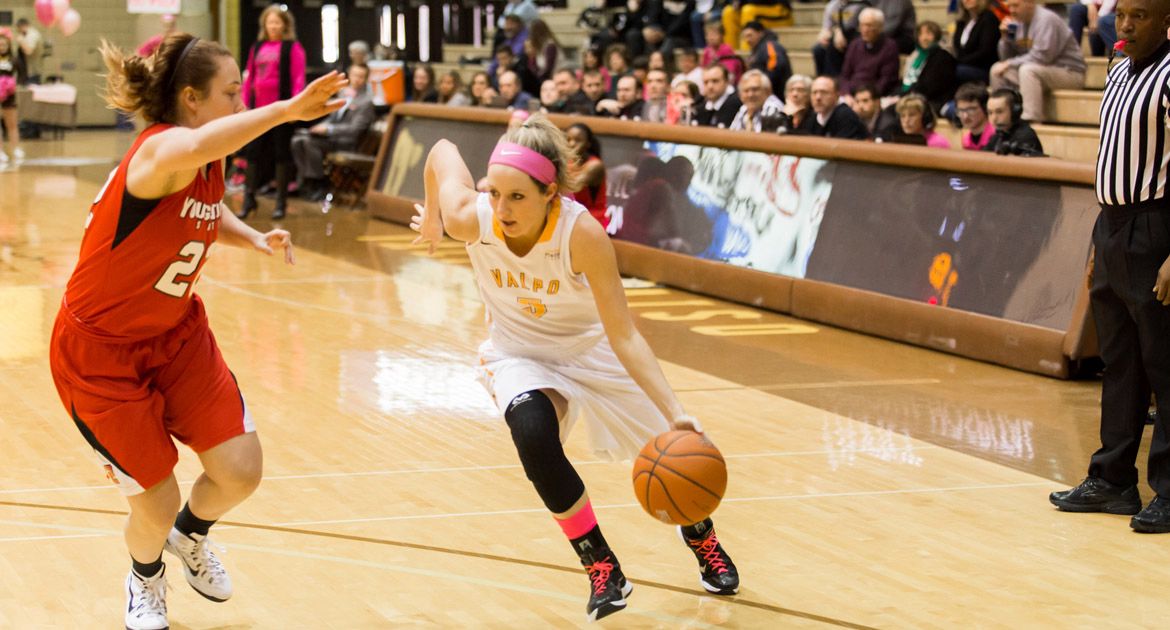 It meant so much more than half-priced pizza.

A Crusader team that has been in search of a signature victory seized it Saturday afternoon, downing Youngstown State, 65-60, at the Athletics-Recreation Center.

Senior Abby Dean (Carmel, Ind./Carmel) finished in double figures for the third straight game, matching a career-high 21 points. Dean has averaged 16.0 points per game over her last three contests while shooting 68% from the field. Her nine field goals made Saturday tied a career watermark.

Sophomore Jasmyn Walker (Muskegon, Mich./Mona Shores) represented the fulcrum in a tilt that saw the Crusaders outboard the Penguins, 45-30. Walker amassed 18 points and 13 rebounds, clinching her sixth double-double of the season and fourth in the last six affairs.

Freshman Meredith Hamlet (McBain, Mich./McBain) connected on her first two attempts from the floor to give the Crusaders an early 5-1 lead. Youngstown State wrestled away a one-point lead midway through the opening frame following a Janae Jackson layup, but junior Imani Scott-Thompson (Akron, Ohio/Firestone [Dakota College at Bottineau]) knocked down back-to-back treys to give Valpo a seven-point edge. The Crusaders led 22-16 after ten minutes.

Dean and Walker put Valpo on their backs in the second quarter while the Brown and Gold saw their lead balloon to double digits. The two accounted for 12 of the Crusaders' 14 points in period two. Hamlet hit a 20-footer in the waning seconds of the half to give Valpo a 36-27 advantage at the break. Dean registered 11 first-half points while Walker tallied eight points and five rebounds.

Youngstown State methodically chipped away at the deficit in the third quarter. The Penguins trimmed the margin to four points on two separate occasions. With under a minute to play in the period, Kelley Wright sank a three-pointer to make it 47-45, but Dean provided the answer on the other end with a triple of her own.

The Crusaders adequately contained Cash in the first half, but the sophomore went off for 16 points after halftime. Cash kept the Penguins within striking distance for much of the final stanza, and a three-pointer from Nikki Arbanas with 6:37 on the clock nudged it to a 56-55 game. Dani Franklin (Cedar Rapids, Iowa/George Washington) finished with only five points Saturday, but she saved three of them for a critical juncture. Her lone three-pointer of the game answered Arbanas's trey less than a minute later.

Trailing by six points with a little more than four minutes to play, Youngstown State got its 11th - and final - three-pointer of the day as Arbanas again raised the nylon from downtown. Cash followed that up on the Penguins' next possession with a layup that made it a 61-60 contest with 3:22 left. YSU did not score the rest of the way.

Fittingly, Walker and Dean provided Valpo with the final four points of the game to insure the victory.

Ten of Walker's 18 points came at the foul line while shooting 4-of-8 from the floor. Senior Lexi Miller (Caledonia, Mich./Caledonia) was 4-for-4 from the charity stripe as she finished with six points and four assists. Franklin's contributions revealed itself in the hustle stats. The sophomore snagged seven boards while logging two blocks and two steals. Amber Lindfors (Elk Grove Village, Ill./Elk Grove) added another two blocks to her season log. The freshman is now up to 34 blocks on the year.

Valpo (8-11, 4-4 Horizon) will have a week to prepare for Horizon League Preseason Player of the Year Ruvanna Campbell and the UIC (10-9, 1-7 Horizon) Flames. UIC thrust its way into the win column Saturday after dispatching Cleveland State at home, 80-62. WVUR (95.1 FM, Valparaiso) and ESPN3 will have the action live from the Athletics-Recreation Center next Saturday at 1:30 pm CT. Links to both including live stats will be available at ValpoAthletics.com.