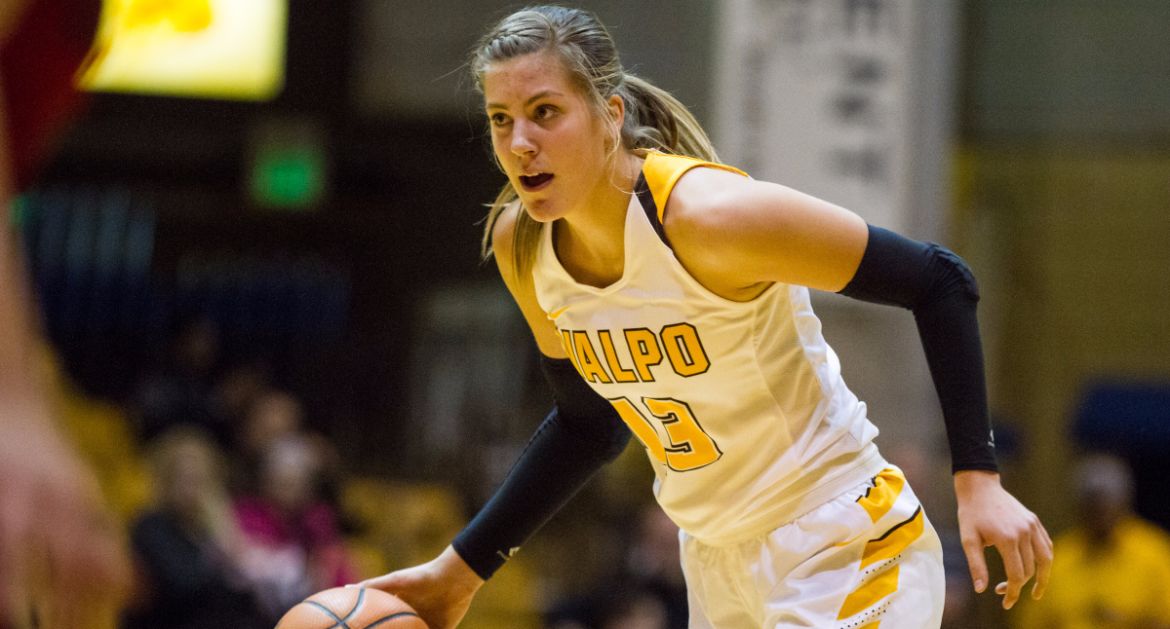 Ella Ellenson had a career-high 10 points on Thursday against Fort Wayne.
Fort Wayne at Valparaiso | December 21, 2017

The Valparaiso University women’s basketball program has accomplished a feat no Crusader team has reached in the last 10 years – finishing the nonconference portion of the season with seven victories. The Crusaders cruise into the holiday happy after Thursday’s 68-50 win over Fort Wayne, a triumph that extended the team’s winning streak to four and allowed Valpo to remain undefeated at home this season.

On the Winning Streak: “It feels great to end the nonconference schedule with four straight wins. Our players have really risen to the challenge of competing night in and night out. They have stepped up when adversity strikes and shown an ability to grind out wins.”

On Limiting Turnovers “We’ve done a good job of making good decisions and finding the sure pass. That doesn’t mean we’re not going to turn the ball over at all, and in fact in a few of our losses we’ve turned it over too many times, but our team understands that we give ourselves a chance to win by getting more shots off. We’ve been executing significantly better, and I think it’s a combination of talent, focus and a desire to win.”

On Georgi Donchetz: “It was awesome to see her out there. Georgi is the heart and soul of our program; everybody wants her to do well. It meant a lot for her to be able to get on the floor right before the holiday.”

On Ella Ellenson: “She showed a lot of patience tonight. She got herself to the free-throw line and knocked her free throws down. She’s a hustler, she makes exciting plays and she battles each and every possession.”

On Nicole Konieczny: “She has been sick and lost a lot of weight over the last week. Our team has been trying to support her. She has been focused on being her best and has let the game come to her. She focused on attacking the paint and she made plays today.”

After a few days off for the Christmas holiday, the Crusaders will return to the court to prepare for the first Missouri Valley Conference game in program history on Friday, Dec. 29 at 7 p.m. CT at Drake. The game can be seen on The Valley on ESPN3 or heard on 95.1 FM Valparaiso. Links to live video, audio and stats are available on ValpoAthletics.com.