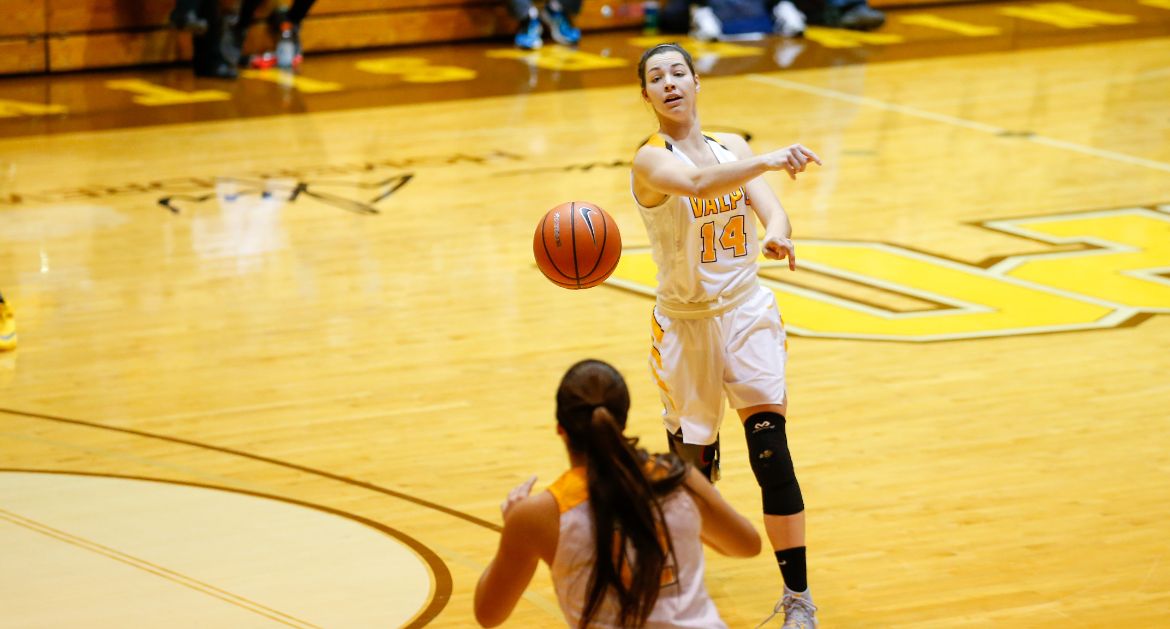 Marlee Profitt and Addison Stoller both made strong contributions off the bench on Sunday.
Valparaiso at Southern Illinois | January 21, 2018

The Valparaiso University women’s basketball team battled back to get within two points in the second half after trailing by as many as 18, but Southern Illinois sealed the deal down the stretch for a 74-63 win on Sunday afternoon at SIU Arena. There were several individual bright spots for the Crusaders, who were led in scoring by Meredith Hamlet (McBain, Mich. / McBain).

On cutting an 18-point deficit to 2: “We became a lot more aggressive on the defensive end. I could hear several players, especially Meredith Hamlet, starting to talk more. Our whole team showed defensive urgency during that stretch. We attacked on the offensive end and were ready to put the ball in the hole. We pursued well both offensively and defensively as we put together that run.”

On Free-Throw Shooting: “We are a strong free-throw shooting team; missing that many is not typical of us. It’s disappointing that we didn’t take full advantage of those chances at the free-throw line. It’s not a concern going forward because it’s something I know our kids will bounce back from. They know they’re good free-throw shooters, but failing to capitalize on those opportunities changed the course of this game.”

On Profitt: “She relentlessly pursued the ball especially on the offensive glass, and also on the defensive side. She did a quality job of getting up there and keeping the ball alive. When she was on the floor, we rebounded the ball better, there’s no question about that.”

On Stoller: “I was extremely happy for Addy this weekend. She’s a true competitor in every sense of the word. She’s still trying to get her legs under her, literally. She attacked the paint, she defended well and she talked. She’s willing to bulldoze through people and get those garbage points. She had her hands on a few balls on the defensive side. We made our run when she was on the floor.”

On Turnovers: “We had a couple really big opportunities and instead of coming down and scoring we turned it over in some key moments. Some of it was simply not putting our pass on the money. We tried to make a play instead of coming back to meet the pass. We’ve got to take care of the basketball first and foremost. This game could have been much different had we done that at key moments.”

The Crusaders will return home next weekend as they match up with Evansville on Friday at 7 p.m. CT at the Athletics-Recreation Center. The game can be seen on The Valley on ESPN3, heard on 95.1 FM WVUR and followed via live stats. Links to all the coverage are posted on ValpoAthletics.com.