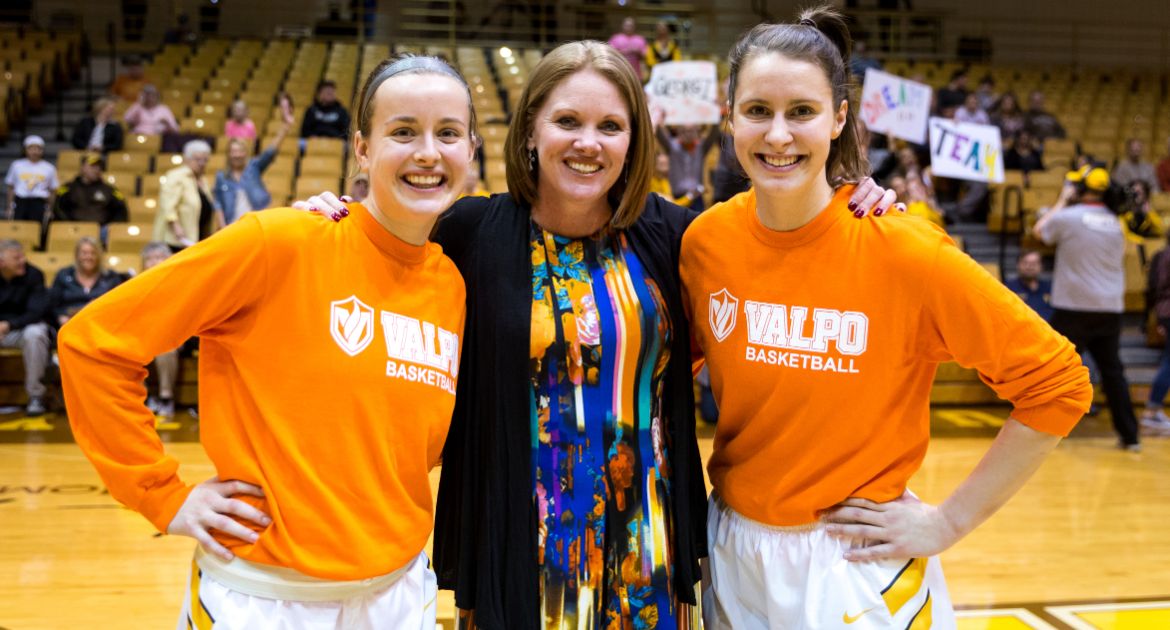 From the moment seniors Georgi Donchetz and Dani Franklin took the court during morning shootaround to the moment they addressed the crowd following the game, something was different about this day for the Valparaiso University women’s basketball team.

This wasn’t just another day and another game, this was an emotional farewell to two of the program’s most impactful players on and off the court for the last four seasons. As they took the floor for the final home game of their collegiate careers, this day was a celebration of all they’ve accomplished and meant to the University and the team over the course of four seasons.

The story was the people – two people to be specific. You know the names – Georgi and Dani; Dani and Georgi. Two seniors, two captains, two leaders and two friends who have been closely associated with one another during their four years with Valpo’s program. Two players who complement each other’s strengths perfectly, forming an unparalleled leadership duo.

Before the game tipped off, the Crusaders took the court for warm-ups, but that wasn’t Valpo’s normal warm-up attire. That’s because this was no normal day; this was Senior Day for two Valpo players who won’t soon be forgotten. The Crusaders warmed up in special orange shirts to commemorate the senior class of 2018. Why orange? That was the favorite color of Georgi’s mother Tina, who passed away in November 2015.

Georgi’s family members helped her through that difficult time in her life. And they were there with her on Saturday – father Jay and sisters Charli and Danielle accompanying her during the pregame ceremony, and many others looking on with pride. Georgi’s second family has always been there for her, too. The family occupying the seats on the home bench; the family in the locker room, on the bus and in the huddle. And she’s helped that family in return, serving as a fountain of energy and the heart and soul of Valpo basketball for four seasons.

The backs of the orange shirts say “we love our seniors” – a phrase that has been used for every senior day ever, but has perhaps never held more truth. For many players on many teams, there would be a sense of jealousy if one player received as much attention as Dani Franklin. Not this team. Not Dani. The underclassmen love these seniors, and these seniors love the underclassmen right back.

The backs of those shirts surely mean a lot to Dani and Georgi. But the five letters on the front of the shirt mean more to Valpo’s seniors. To them, it’s been about the team since Day 1, and Saturday was no different. You know the letters, but we’ll tell you anyway – VALPO.

If you looked closely on Saturday at the ARC, you saw the kids. And if you listened closely, you could probably hear their whispers. “Is that really Miss Franklin?” “Wow, look at Miss Franklin juggling on the video board.” “Miss Franklin is awesome.” Those kids are the second grade students at Heavilin Elementary School in Valpo who are fortunate enough to have Dani as a student teacher this semester.

And those kids aren’t the only ones watching Dani with pride. During the senior ceremony, her mother, her sister and her niece had an up-close view, joining Dani on the court. Just like Georgi, Dani had a cast of others looking on from the audience, there to see her final home game in a Valpo uniform. They’re proud of all Dani’s accomplishments – and there are many. But this story isn’t about statistics or accolades – this story is about the people.

There’s someone else in the stands who wouldn’t miss Dani and Georgi’s Senior Day for anything, and this isn’t a family member, former coach or family friend. Who is the cheerful man wearing a black Valpo jacket and looking on with a smile? That’s the former bus driver, Rick Ball, who was with the team on the road for nearly every trip of Dani and Georgi’s first three seasons. Rick doesn’t drive anymore, but he hasn’t forgotten those players or this team. How many players and teams make such an impact on a bus driver that he drives into town a year later to see their Senior Day? He isn’t “just a former bus driver,” he’s part of the family, and that says everything about these players and this program.

The Crusaders will play Loyola in the opening round of Hoops in the Heartland as the MVC Tournament begins on Thursday, March 8 at 4 p.m. at the TaxSlayer Center in Moline, Ill. Next week, the games will be the story, but for one day on Saturday, the game wasn’t. The story was something much larger than that.