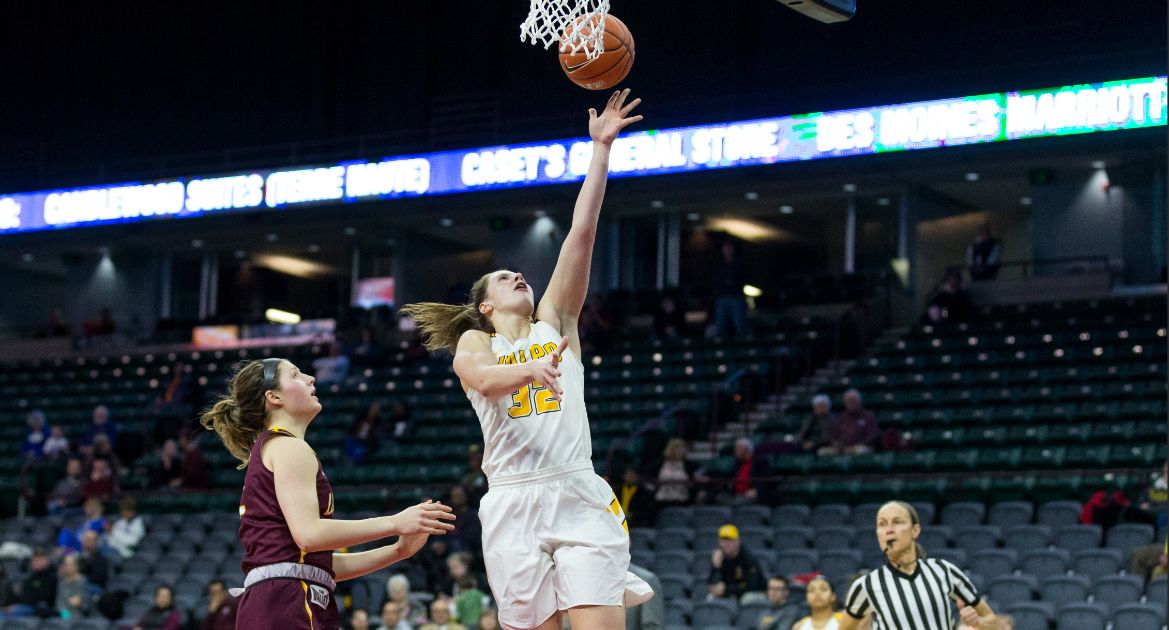 The Valparaiso University women’s basketball team made sure the season extended beyond Thursday’s first round of the Missouri Valley Conference Tournament, putting in a wire-to-wire team effort to down Loyola 63-46 at the TaxSlayer Center. The victory allowed the Crusaders to punch their ticket to the quarterfinals, which will take place on Friday.

Thoughts on the Game: “It was a great defensive effort by us. It was a good job of executing what we’ve been talking about doing all week. We knew the first-round matchup early enough that we had plenty of time to prepare. We were fortunate to come away with a win with a fourth-quarter comeback the last time we played them, and we wanted to make sure we didn’t put ourselves in that situation again. Some of the turnovers that we forced helped us get our offense going early. It was important for us as coaches to get Dani and Meredith off to quick starts. We ran a couple plays right off the bat to get them good looks. I’m very proud of our effort.”

On Coach Dorow’s Medical Leave: “We’re all thinking about Coach Dorow and what she’s dealing with on a personal level, so that part is challenging. At the same time, it’s that time of year where the adrenaline of playing in a tournament takes over. The rest of our staff and team has come together, and I think that was indicative of how the girls played tonight. We played a better as a unit than we had in recent games. This is just another hurdle that we have had to overcome. Our challenge is to be here as long as possible and keep playing. That’s been our mentality the whole time.”

On Leading Wire to Wire: “We were able to get our top two scorers off to good starts, and we did a good job of frustrating their counterparts, not letting Loyola’s top scorers get hot early in the game. Both Dani and Meredith had early baskets. Once they are involved and engaged, the rest of our team follows suit. Nicole Konieczny played a great game for us tonight. Grace Hales hit some big buckets. We had great production off the bench. It was a true team effort.”

On Drake: “They’re great. They’ve won 40 straight conference games for a reason. We have to play better than we did last week against them. We were very poor in our defensive effort. Offensively, we did some of the things we wanted to do, but if you can’t slow down Drake or defend their transition, nobody is going to touch them, and that’s the way it’s been in conference most of the year. Our job as a staff tonight is to come up with a different game plan defensively. We want to see what we can do on the offensive end to extenuate the positives that we had last time. I’m guessing that it’s going to be a different game tomorrow. I think we’re going to be a lot more competitive. Our kids are feeling good, and I hope that it translates to the court against Drake.”

The Crusaders advance to play No. 1 Drake in the quarterfinals of Hoops in the Heartland. That game will begin at noon CT on Friday at the TaxSlayer Center in Moline, Ill. Scott Warman (play-by-play) and Laura Leonard (color commentary) will have the call on The Valley on ESPN3. The hometown radio call can be heard on 95.1 FM Valparaiso with Ben Ariano (play-by-play) and Renee’ Turpa (color commentary) and live stats are also available.