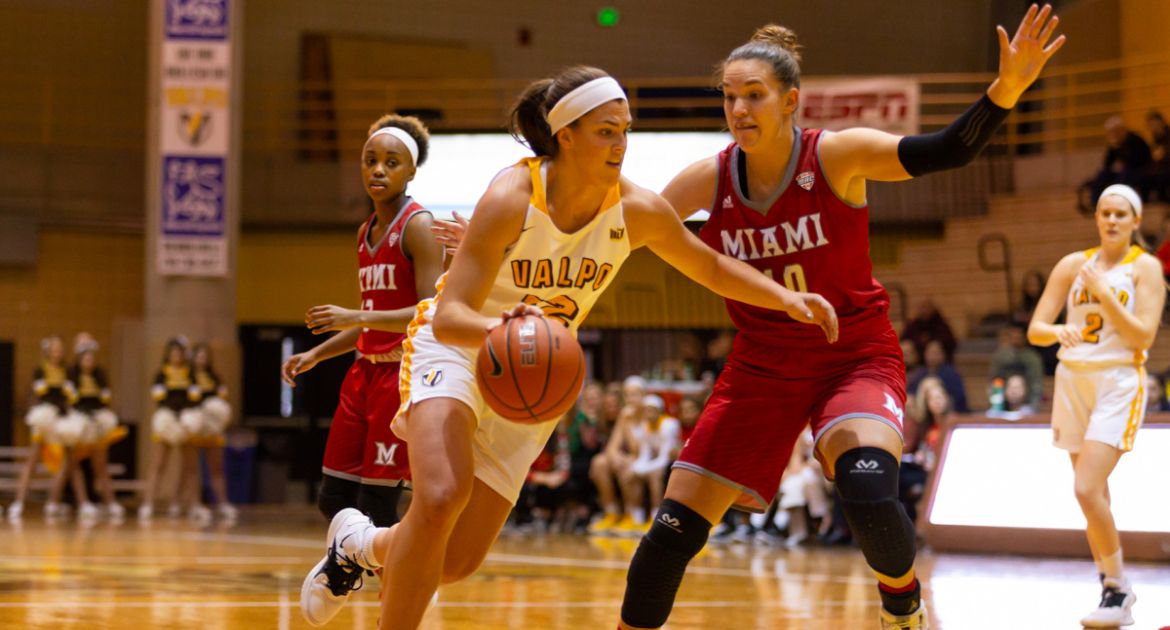 The Valparaiso University women’s basketball team ran into a high-level MAC foe on Saturday afternoon as Miami (Ohio) enjoyed a 68-47 victory at the Athletics-Recreation Center. The visiting RedHawks, a team that reached the WNIT a year ago, leaned on a quality third quarter to pull away from the hosts in the last game before finals week for both teams.

The atmosphere was a festive one as a quality crowd was on hand with numerous students and fans sporting ugly sweaters, which were also donned by both coaching staffs and members of press row.

“I think we did a nice job early setting screens, reading the defense and hitting people. They made some changes defensively, and that’s what stagnated our offense. They started switching some things, and we were never able to recover from that.”

“Miami is an extremely physical team. They have athletics guards and quality bigs inside. They’re a good team that played in the postseason last year and have a year under Megan’s system. They do a great job. Their defensive numbers are staggering this year. I thought we actually shot it really well considering what other teams have done against them. We have to continue to focus on doing things the Valpo way.”

“On defense, I thought we did a nice job guarding their initial actions. When they got out of their initial sets and just started playing basketball, our inability to communicate really hurt us. We had some times where we lost people and we closed out short on some players who can really shoot the basketball. We’ve got to grow and learn from this loss so we can get better.”

“We have to get better in practice this week. Offensively we have to work through some things, and we have to continue to put our players in situations where they have to communicate with each other defensively. We’re trying to move past being an average defensive team that can only guard what we know and start guarding everything.”

After a week off for finals, Valpo will be back in action on Sunday, Dec. 16 against North Dakota State to round out a stretch of three straight home games. The game will tip off at 1 p.m. at the Athletics-Recreation Center and will be broadcast on ESPN+ and 95.1 FM Valparaiso.