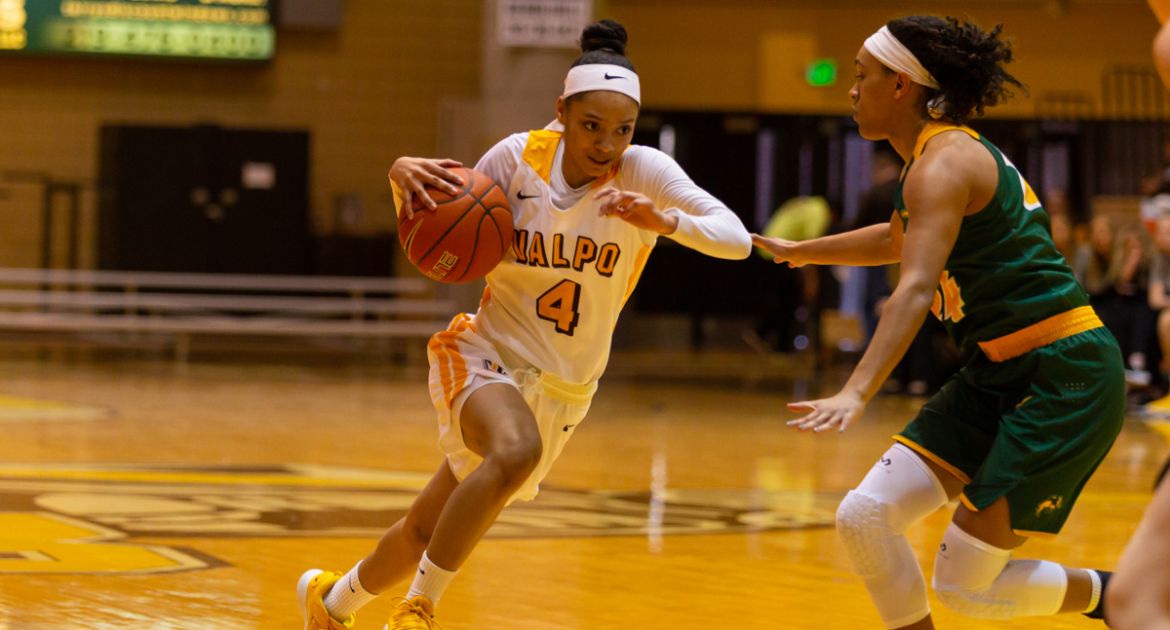 Close games have been the norm for the Valparaiso University women’s basketball team this season. Sunday was yet another day where the game was still hanging in the balance when the public address announcer bellowed the words, “one minute – one minute remaining.” North Dakota State edged the hosts for a 51-48 win – the seventh time in 10 games Valpo has played a game decided by six points or fewer.

“They made a couple more plays than we did. They hit some shots late and we did not hit shots late. The game came down to us not being able to take care of the basketball. We had 18 turnovers, and when you can’t take a shot every possession, you put yourself in a position to lose a game like this. We’ve got to do a better job of taking care of the basketball and valuing every single possession.”

“Today we learned that we’ve gotten better in some areas. There were some things we didn’t do well today, but our defense is getting better and there are fewer times that we’re giving up middle penetration. We’re getting closer to being in the right spot to take charges. We’re denying reversal a little bit better, and they’re getting catches further off the 3-point line. Offensively, we had some really good possessions where we played unselfishly – we moved it, kicked the ball out and got second drives. We just didn’t quite do that enough, and there were some possessions where we did that and got really good shots, but just didn’t make them. Playing at this tempo and pace is not easy, so we have to continue to do it every single day so that it becomes easier in crunch time.”

“Addison came out really aggressive. We ran the first play of the game for her and she drove it strong and ended up scoring right off the bat. That’s always a good sign. She’s being really aggressive attacking the basket. She’s doing a great job playing through a lot of contact at the rim and she’s making a lot of those shots. She really kick-started our rebounding. For us to outrebound them by 10 boards is big for us. That’s going to be a big piece of us being able to move forward and win games.”

“We have a tendency to foul, and that’s something we’re focusing on. We’re calling fouls in practice and really hammering them about hand checks. Only having seven players combined with our problem of fouling really hurts down the stretch. We had Addy foul out and two other players with four fouls. It handcuffs how aggressive you can be both offensively and defensively.”

“I think it’s great that we have a quick turnaround with games on Wednesday and Friday. We can get in tomorrow and talk about what we did well today and what we need to correct. Then, we turn around and play a team in Purdue Fort Wayne that is going to play similar to what we just saw. I’d rather play games, and I think the players would rather play games. It’s the best time to learn and get better. Having a lot of games this week is a great learning opportunity.”

It’s a busy week for Valpo as the team will play the second of three games in a six-day span on Wednesday at Purdue Fort Wayne at 6 p.m. CT / 7 p.m. ET. The game will be broadcast on Mastodon All-Access ($) and on ValpoAthletics.com via UStream. Links to live coverage will be available.