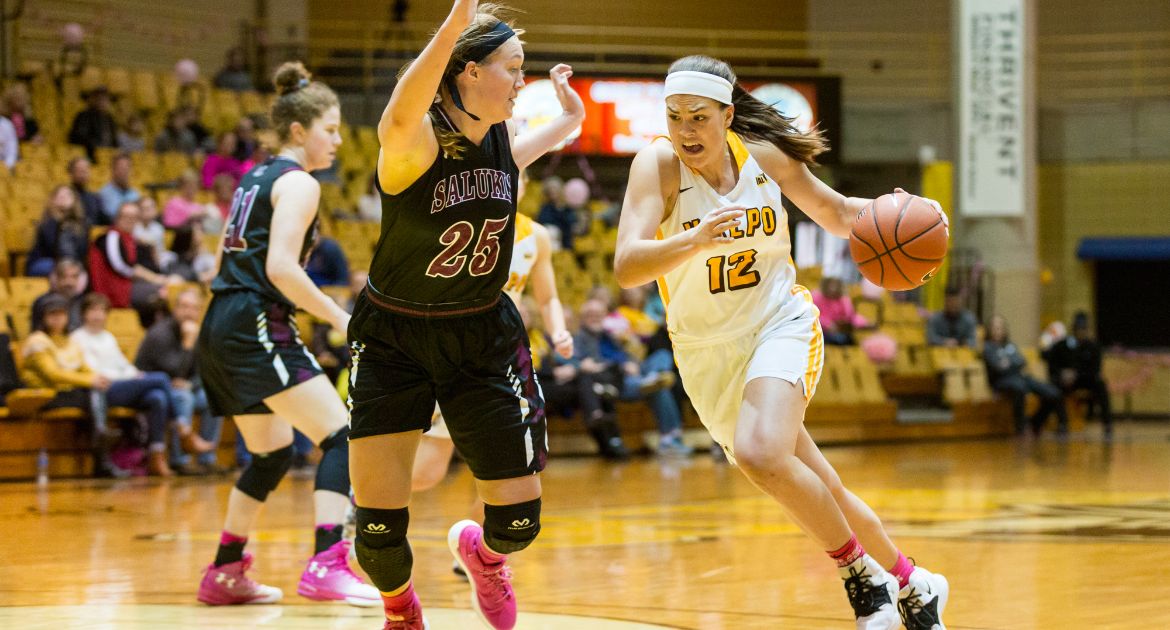 In a year where Valparaiso University women’s basketball coach Mary Evans has emphasized growth, Addison Stoller (Cissna Park, Ill. / Cissna Park) has exemplified the word. The redshirt sophomore continued to outdo herself on Sunday afternoon at the Athletics-Recreation Center, again altering her career high in scoring by pouring in 24 points after posting 22 in the previous game. She accounted for over half of the team’s scoring in a 58-47 setback to visiting Southern Illinois.

“Addison had good matchups this weekend. We played two teams that are really good defensively. Her matchup was the best one we had. On top of finding her own points, she did a nice job of making some quality passes to her teammates. She’s such an unselfish kid that it’s nice to have her be able to facilitate some things, because she makes the right decisions. She’ll shoot it when she needs to, and she’ll also find her teammates when she needs to do so.”

“We had open looks and other people took a good number of shots. It was balanced as far as who was getting shots, we’ve just got to get back in the gym and get shots up. We need to get our legs underneath us and get some rest as well. We’re trying to get our confidence back in our 3-point shooting. A lot of that is getting repetitions in practice.”

“We held them to seven offensive rebounds, and that was a big step forward. We did a good job against their transition offense. They got a few transition baskets in the third quarter that sparked a run and stretched the game out. There was progress in both of those areas. Our guards did a tremendous job getting into the rebounding mix and helping us there. If we can take that and grow from it, there are a lot of positives from this weekend. We’re continuing to grow individually and as a team. We’re going to see some good things moving forward.”

Valpo (6-21, 2-13) will return to the hardwood on Thursday at 7 p.m. for a game against Bradley in Peoria. Please note that the game is a day earlier than the typical Friday night in The Valley. The game will be broadcast on ESPN+ with links to live video, audio and stats available on ValpoAthletics.com.