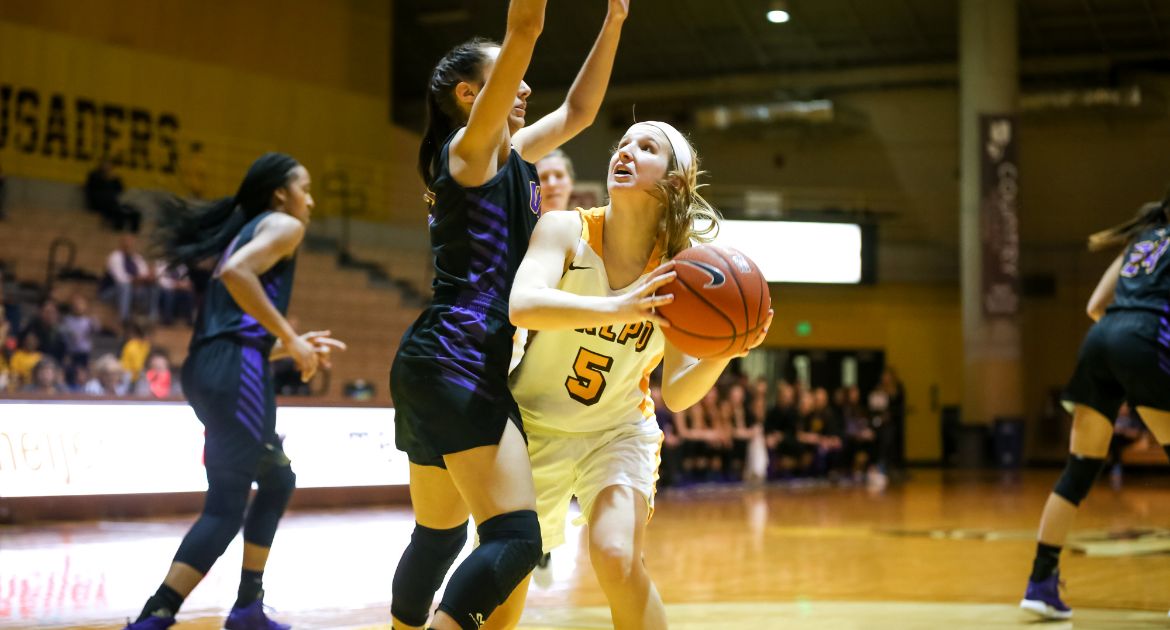 The Valparaiso University women’s basketball team had five players in double figures on Thursday night at Renaissance Coliseum in Peoria as the team led for 24 minutes, 58 seconds against Bradley. However, the host Braves went on a late run after two Valpo players fouled out and pulled away for an 87-76 victory.

“It is hard when we had two players foul out and that puts us down to six people, but I’m not going to use that as an excuse. We’ve got to find a way to finish games. We played with tremendous effort tonight, but we‘ve got to clean up mental mistakes. Offensively, we took some quick shots instead of running the offense when we had the lead. We’ve got to learn how to play with a lead. This was a really good effort by our young ladies, and I’m proud of the way they played and fought tonight.”

“We had five players in double figures, so it was a very balanced effort. We shot well from the free-throw line and made 13 3s again. However, 17 turnovers is too many. We had some critical turnovers late in the game. We have to work on breaking the press. Those are things we can fix and we’ll do that moving forward.”

“Bradley’s top three players are tough to guard. Haack and Petree can shoot lights out from 3, so you’ve got to get up and guard them and prevent them from getting 3s, but tonight they hit mid-range shots and got the rim. When we got out there, that freed up Brackmann to get her points. We’re going to spend a lot of time in the offseason on shoring up our defense. We wanted to get our offense where it needed to be, but we’ll be better at those things defensively moving forward.”

“We’ll get in and look at film from tonight. Illinois State has a strong post player in Simone Goods that we need to slow down. We’ll spend quite a bit of time looking at how this game translates into that and showing our players what we need to fix. We’re going to practice on Friday and get ready for Illinois State. This is about being fresh late in the season. We were the fresher team for three quarters tonight, but we ran out of steam in the fourth.”

Valpo (6-22, 2-14) will next be in action on Sunday at 2 p.m. in Normal, Ill. for the final road game of the year at Illinois State. The game will be broadcast on ESPN+ and links to live video, audio and stats are available on ValpoAthletics.com.