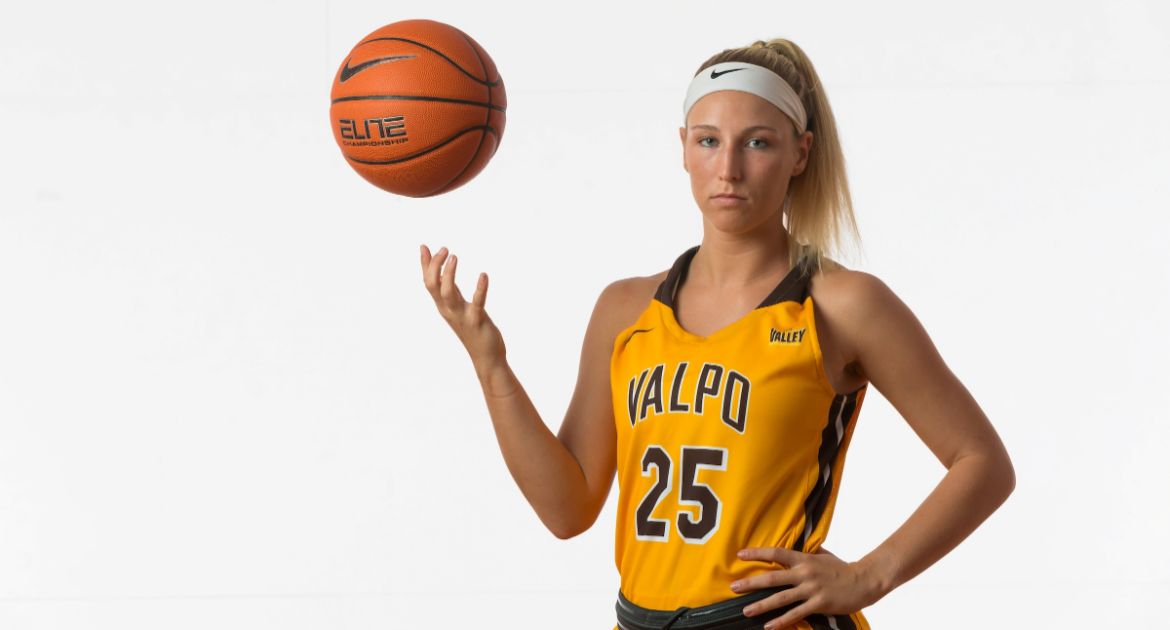 Next Up in Valpo Basketball: The Valpo women’s basketball team tips off the 2019-20 campaign on Sunday afternoon, and will test itself right out of the gate against a Power Five opponent in Ohio State. The game will be a neutral-site matchup at Wittenberg University.

Previously: Sunday will be Valpo’s first public game of the season, as the program supplemented its preseason practices with a pair of closed scrimmages against Western Michigan and Lewis.

Head Coach Mary Evans: Mary Evans (8-24) enters her second season as head coach of the Valpo women’s basketball program in 2019-20. Evans’ impact on the program was immediately clear in her first year, as Valpo shattered its previous program record of 224 made 3-pointers in a single season by knocking down 276 trifectas - a mark which ranks seventh in MVC history. Valpo ranked among the top-25 nationally in both total 3-pointers and 3-pointers per game in Evans’ first season at the helm of the Valpo program.

Series Notes: Valpo and Ohio State have met just once in program history - an 84-60 victory for the Buckeyes in the opening round of the Great Alaska Shootout on Nov. 21, 2000. Valpo faced one Big Ten member in Evans’ first year as head coach, falling to Illinois last year, 73-54. The Brown and Gold are in search of their first win over a Big Ten program since a 64-52 victory over Indiana at the ARC to open the 2012-13 campaign.

...looking ahead
- Valpo continues life on the road next weekend with a trip north, where it will take on North Dakota State Friday night and North Dakota on Sunday afternoon.
- In all, Valpo will play its first four games of the season away from home before its home opener on Nov. 24.

...at neutral sites
- Valpo posted a 2-1 record on neutral courts last year in Evans’ first season.
- The Crusaders beat St. Francis Brooklyn at Morehead State in the regular season and earned an MVC Tournament win over Indiana State in Moline, Ill. before falling to nationally-ranked Drake at the tournament.
- Valpo has finished at or above .500 in neutral-site matchups in each of the last three years.

@OhioStateWBB
- The Buckeyes open the 2019-20 season as well on Sunday.
- OSU posted a 14-15 record in 2018-19 and went 10-8 in Big Ten play.
- The Buckeyes advanced to the postseason, falling to Morehead State in the opening round of the WNIT.
- OSU rolled over Urbana in its lone exhibition game of the preseason, 131-50, with seven of eight players scoring in double figures.
- 6’1” freshman guard Kierstan Bell, who tied for team-high honors with 25 points in the exhibition, was a McDonald’s All-American coming out of high school and three-time Ohio Player of the Year.

Easing Into the Season
- The Valpo women’s team will be the last MVC team, either men’s or women’s, to open up the 2019-20 season when it tips off on Sunday afternoon, six days into the campaign.
- In fact, by the time Valpo tips off, three women’s teams - UNI, Loyola and Missouri State - will already have two games under their belts.
- In all, Valpo will play just once in the season’s first 10 days and just three times over the first 16 days.

Non-Conference Challenges
- The lid-lifter against Ohio State is one of four non-conference matchups for Valpo against postseason teams from a season ago.
- A WNIT finalist from last year awaits Valpo on Nov. 21, as it makes the short jaunt to Evanston to face Northwestern.
- Valpo will take on Toledo, which advanced to the second round of the WNIT last year, in a road game on Nov. 27.
- The quartet of WNIT opponents rounds out with a home game at the ARC against Morehead State - which defeated Ohio State in the opening round of last year’s WNIT - on Dec. 17.
- That sets the stage for an MVC slate which features two matchups apiece against three postseason teams last year: Missouri State (NCAA Sweet 16), Drake (NCAA) and UNI (WNIT).

What’s Back
- Six letterwinners from last year’s team return for Valpo in 2019-20.
- Included among the six returning letterwinners are a trio of full-time starters: senior Grace Hales, redshirt junior Addison Stoller and junior Ella Ellenson.
- Sophomore Shay Frederick started each of the last 13 games last year as well en route to MVC All-Freshman Team accolades, while senior Maya Meredith and sophomore Ilysse Pitts also return.
- In all, Valpo returns 64.0% of its minutes played, 64.4% of its scoring and 72.3% of its rebounding from last year’s squad.

Returning Wounded
- Valpo has three players on this year’s roster who are looking to potentially get back on the court after missing all last season due to injury.
- The trio includes redshirt juniors Caitlin Morrison and Marlee Profitt, and redshirt sophomore Nicole Konieczny.
- In addition, a pair of injured Crusaders from a season ago are still on the bench, but not in a playing capacity: Hannah Schaub, who missed the last 13 games of the year, decided to forego her final season of eligibility and is serving as a graduate manager, while Taylor Richards has transitioned into a role as a student assistant after two seasons on the active roster.

What’s New
- Five newcomers will make their Valpo debuts this season.
- Graduate transfer Alexis Cowan joins the program with one year of eligibility after spending two seasons at Florida Atlantic, including a medical redshirt last year.
- A pair of transfers from Denver will reunite on the court this season. Redshirt sophomore Carie Weinman is eligible after transferring in the summer of 2018 and sitting out last year, while junior Grace White is immediately eligible after transferring in May of 2019 and receiving a waiver from the NCAA.
- Two true freshmen round out the Valpo roster: St. Charles, Ill. native Zoe MacKay Zacker, who rejoins prep teammate Ilysse Pitts, and Coopersville, Mich. native Cara VanKempen.