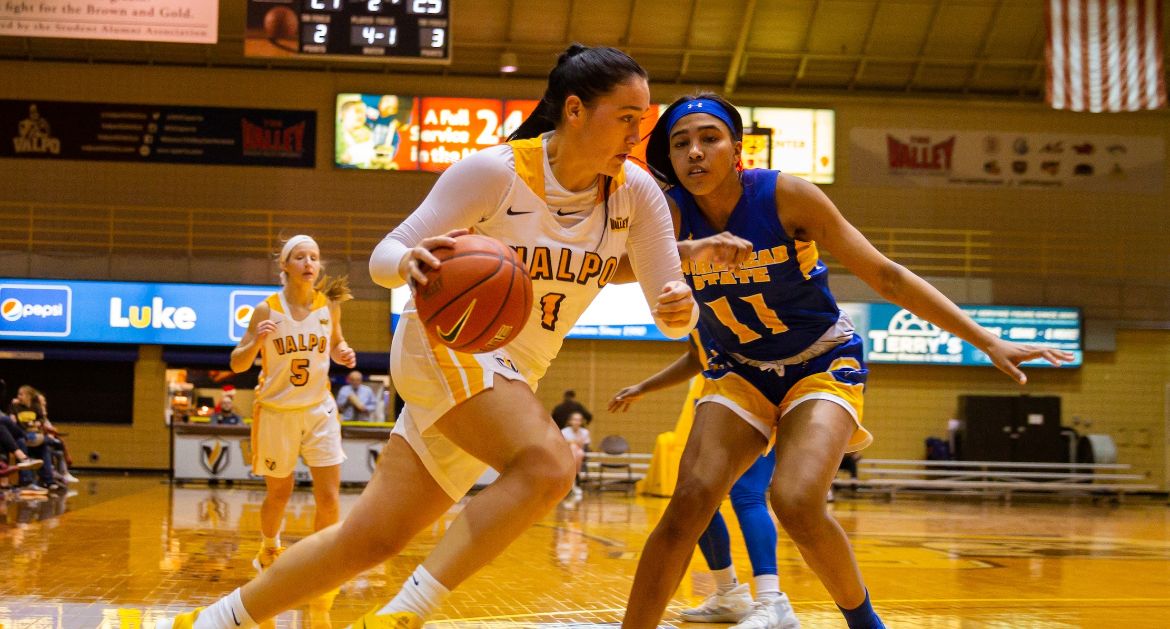 A perfect month. The best pre-conference record in program history. A stat line by a single player unmatched since 2008, and a career-high scoring performance by another player. A seven-game winning streak to carry into the new year. That and more spawned out of the performance of the Valpo women’s basketball team Monday night in Charleston, Ill., as the Brown and Gold closed the 2019 calendar year with a 78-66 victory over Eastern Illinois.

“I am really happy with the team’s overall performance. I thought they came out and executed well both offensively and defensively. Eastern made some nice adjustments at halftime, and we got off to a slow start in the third. I thought our team committing to improving our communication and ball pressure helped spark our answer to their third quarter run. Our players should be really proud of how they handled the adversity of losing the lead, refocusing and going on a run of our own.”

“Grace Hales is a fantastic shooter. I knew it was just a matter of time until she really got rolling. Her hot start really got us going in the first quarter and I believe her teammates gain a lot of confidence when they see her make shots.”

“Grace White is a really talented basketball player. She has a tremendous basketball IQ and is a great passer. Eastern plays a really unique zone and having her, along with Shay and Ilysse, up top allowed us to attack it really effectively. She also really crashed the glass tonight. She will continue to get better and better within our system as she continues to learn and understand our principles.”

“Ilysse was fantastic tonight! She played probably her best game of her career. She is a really explosive athlete and used that to make some really special plays tonight. She was huge in the third quarter, coming in off the bench and hitting a shot when we needed to take back momentum. We have a really deep bench this year and I am confident we will have a lot of different players step up night in and night out.”

“This team deserves a lot of credit for what they have accomplished during the non-conference. They have continued to work and learn every day. They have bought in to the team concept and sacrificing personal success for the success of the team. They should be really around of what they have accomplished so far. We are looking forward to starting Valley play and will continue to approach it one game at a time. We will prepare during the week and play games on the weekend. Win or lose, we will learn from them and try and continue to grow every day. Our goal is to be playing our best basketball in March.”

Valpo (8-3) opens the 2020 calendar year and Missouri Valley Conference play simultaneously on Friday evening at the ARC when it welcomes Southern Illinois to town. Game time is set for 6 p.m., and the game will be broadcast live on ESPN+.