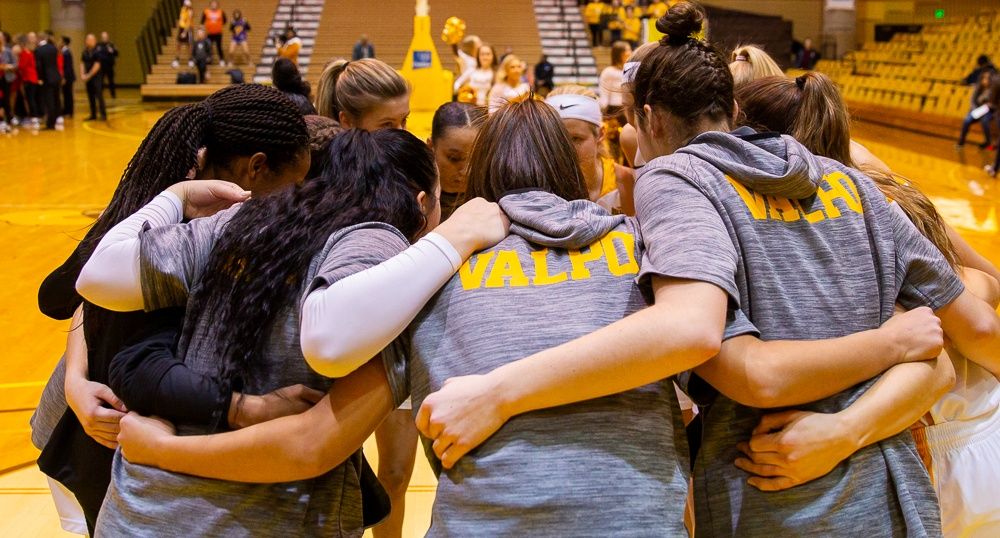 Next Up in Valpo Basketball: The Valpo women’s basketball team continues its three-game homestand on Sunday afternoon at the ARC as it welcomes Bradley to town. The Brown and Gold will look to knock off the first-place Braves, who enter Sunday’s matchup as the MVC’s lone remaining unbeaten team in conference play.

Previously: A 10-point run to end the first quarter proved to be too much for Valpo to overcome Friday evening at the ARC, as the Brown and Gold battled in an attempt to rally over the final three quarters before succumbing to visiting Illinois State, 72-60. Addison Stoller led Valpo with 13 points, while Shay Frederick and Carie Weinman chipped in 12 apiece.

Head Coach Mary Evans: Mary Evans (18-30) is in her second season as head coach of the Valpo women’s basketball program in 2019-20. Evans’ impact on the program was immediately clear in her first year, as Valpo shattered its previous program record of 224 made 3-pointers in a single season by knocking down 276 trifectas - a mark which ranks seventh in MVC history. Valpo ranked among the top-25 nationally in both total 3-pointers and 3-pointers per game in Evans’ first season at the helm of the Valpo program.

Series Notes: The Braves lead the all-time series over Valpo, 9-2, and are 3-1 in four matchups since Valpo joined the MVC prior to the 2017-18 season. Last season saw both teams defend their respective home courts, as Valpo won 76-73 at the ARC and Bradley claimed an 87-76 victory in Peoria. Shay Frederick, Meredith Hamlet and Addison Stoller all averaged better than 15 points per game in last season’s two meetings, with Stoller adding eight rebounds per game as well. As a team, Valpo shot 40% (24-of-60) from 3-point range in the two games against the Braves.

...versus Illinois State
- Valpo tied the score on three occasions in the middle stages of the opening quarter, the last coming on a fast-break layup by Frederick following a steal to make it 11-11 with 4:14 to play in the period.
- But the Redbirds scored the final 10 points of the quarter over the final four minutes to take a 21-11 lead at the end of the first.
- Illinois State extended the run to 12-0 with the first basket of the second quarter, but Valpo kept ISU off the board for over five minutes, scoring seven straight to close to within 23-18.
- A 12-3 run for the Redbirds out of the media timeout extended their lead to 14 points, and Illinois State eventually took a 37-24 lead into halftime.
- Valpo cut the Redbird advantage to seven points three times in the third quarter, the last with just seconds remaining in the period. But Illinois State’s TeTe Maggett hit a buzzer-beating jumper to give ISU a 54-45 lead entering the fourth quarter.
- Senior Grace Hales sandwiched a pair of driving layups around a third-chance basket from junior Addison Stoller for a 6-0 spurt approaching the midway point of the fourth period, bringing Valpo within 59-53 – as close as it had been in the second half.
- But Illinois State answered with nine points over its next four possessions to extend its lead to 15 points – its largest advantage of the night – with four minutes to play to put the game away.
- The 10-point deficit at the end of the first quarter was Valpo’s worst performance in the opening 10 minutes this season.
- Valpo finished the game shooting just 37.9% from the field.
- Valpo was out-rebounded 41-26 by the Redbirds, who improved to 11-4 overall this year with the win. But after trailing in the category 27-8 at intermission, the Brown and Gold out-rebounded ISU in the second half, 18-14.
- Stoller led Valpo with 13 points, while Shay Frederick and Carie Weinman each knocked down three 3-pointers en route to 12-point nights.

...at Evansville
- Valpo opened the game on an 8-0 run and led 26-13 at the end of the first quarter, hitting 6-of-12 from the 3-point line in the opening 10 minutes.
- Carie Weinman scored 11 points, including three triples, in the opening quarter.
- The hot shooting continued into the second quarter, as the Brown and Gold were 9-of-13 from the floor in that period, including 4-of-6 from deep.
- The Valpo advantage reached 20 points for the first time on a layup from Weinman with 1:40 to play in the half, and a buzzer-beating 3-pointer from Ella Ellenson sent Valpo into halftime with a 50-31 advantage.
- After a hot-shooting first half, Valpo cooled down to start the second half, as a layup by Caitlin Morrison 6:20 into the third quarter was its first field goal of the period. But the Crusaders were able to keep pace thanks to the foul line, where they went 9-of-10 in the third quarter.
- The Valpo lead was 63-46 at the end of the third, and the advantage never fell under 16 points as the Brown and Gold put away the game in the final quarter.
- Four Valpo players finished in double figures in the scoring column on Sunday as the Brown and Gold racked up 88 points, their highest total in a road game since an 88-77 win at UIC on March 6, 2010.
- Weinman led the way as she went 7-of-11 from the floor for a game-high 19 points, while Shay Frederick was right behind her with 18 points and shared game-high honors as well with five assists. For both sophomores, it was their second-highest scoring output of the season.
- Valpo finished the game shooting 57.7% (30-of-52) from the field and was 14-of-29 from 3-point range.
- Defensively, the Crusaders held the Purple Aces to 35.1% shooting and forced 27 Evansville turnovers, 21 of which were steals.

...looking ahead
- The three-game home stretch concludes next Friday with a visit from Loyola.
- The following weekend brings the Iowa road swing, as Valpo heads west to take on Drake and UNI.

...at the ARC
- Friday will be Valpo’s eighth home game of the season, as it currently owns a 4-3 record at home this year.
- Valpo swept all four of its non-conference home games, with wins over Bowling Green, UIC, Morehead State and Chicago State, but is now 0-3 in MVC play to date.
- Valpo went 4-11 at the ARC last year in Mary Evans’ first season at the helm of the program.
- Valpo was just 1-5 last season at home in non-conference action before earning a trio of home wins during MVC play.

@BradleyWBB
- Bradley enters Sunday’s game at 13-2 overall this year and a perfect 4-0 in MVC play, alone atop the conference standings.
- The Braves earned a 13-point win last time out at Loyola.
- Lasha Petree leads BU, averaging 18.6 points per game, and is the two-time defending MVC Player of the Week.
- Gabi Haack adds 13.6 points and 6.6 rebounds per game as well.

Gotta Hit the Twos
- So far this season, Valpo’s 2-point percentage has been a strong indicator of whether it will emerge victorious or not from any given ballgame.
- In 10 wins this year, Valpo is shooting at a 57.2% clip from inside the arc.
- Meanwhile, in its six losses, Valpo is shooting just 37.6% from 2-point range.
- The difference has been even more pronounced early on in MVC play, as Valpo has hit 65.5% of its 2-point attempts in its two Valley wins versus just 35.2% in its three losses.
- Last time out against Illinois State, Valpo was just 2-of-12 from 2-point range in the first half in falling behind by 13 at intermission, but rallied to go 10-of-15 from inside the arc in the second half, which it won by one point.

Hitting Shots
- Valpo had enjoyed its strongest shooting performances of the year over the last few outings prior to Friday’s Illinois State loss.
- Last weekend saw Valpo post its top two shooting percentages of the year, as it hit at a 56.9% clip (29-of-51) at Indiana State before shooting 57.7% (30-of-52) at Evansville.
- The threes were falling as well, as Valpo went 7-of-16 (43.8%) from deep against the Sycamores and then 14-of-29 (48.3%) from downtown against the Purple Aces.
- Valpo has hit at least 40% of its shots from deep in five of the last seven games after eclipsing 40% just once in the season’s first nine games.
- The recent 3-point shooting binge was highlighted by a 14-for-22 effort from deep Jan. 5 against #21/19 Missouri State.
- The 14 triples against UE and MSU are tied for the sixth-most 3-pointers made in a single game in program history. Four of the top-seven single-game totals have come since the arrival of Mary Evans as head coach prior to last season.
- Meanwhile, Valpo’s .636 shooting percentage from deep versus MSU is not only easily the team’s season best, it is the only time in Evans’ tenure that it has hit at a .500 clip or better from 3-point range. It also came just .007 shy of cracking the top-10 chart for single-game 3-point percentage in program history.

Thievery
- Already averaging double figures in steals/game this year, Valpo took it to another level on Sunday at Evansville.
- The Brown and Gold recorded 21 steals in the win over the Purple Aces, tied for the seventh-most in a single game in MVC history.
- 21 steals also is tied for 10th-most in a single game in program history and matches the most in a single game since 1995.
- Shay Frederick and Carie Weinman each tallied six steals in the win, matching and setting career bests, respectively.
- Valpo had recorded double figures in steals in each of its first four MVC games before coming up with just eight Friday versus Illinois State. The Crusaders have still tallied at least 10 steals in eight of their least 10 games overall.
- The Crusaders are averaging 10.7 steals/game this year, a mark which puts them on pace to enjoy the highest single-season steals total the program has had in nearly two decades.

Another Honor For Weinman
- Sophomore Carie Weinman was named MVC Newcomer of the Week Jan. 13, her second weekly honor of the season from the conference office.
- Weinman earned the award after averaging 14 points, 3.5 rebounds and 4.0 steals per game on 64.7% shooting from the floor over Valpo’s wins at Indiana State and at Evansville.
- Weinman opened the week by tallying nine points on 4-of-6 shooting and four rebounds as Valpo won at Indiana State, the program’s first regular season win against the Sycamores since 2001.
- She then stood out Sunday in the victory at Evansville, pouring in a game-high 19 points on 7-of-11 shooting – including a 4-of-7 mark from 3-point range. Weinman also was strong on the defensive end against the Purple Aces, setting a career high with six steals on that side of the ball.
- Weinman previously claimed MVC Newcomer of the Week accolades Dec. 2 after a 20-point output in Valpo’s win at Toledo.