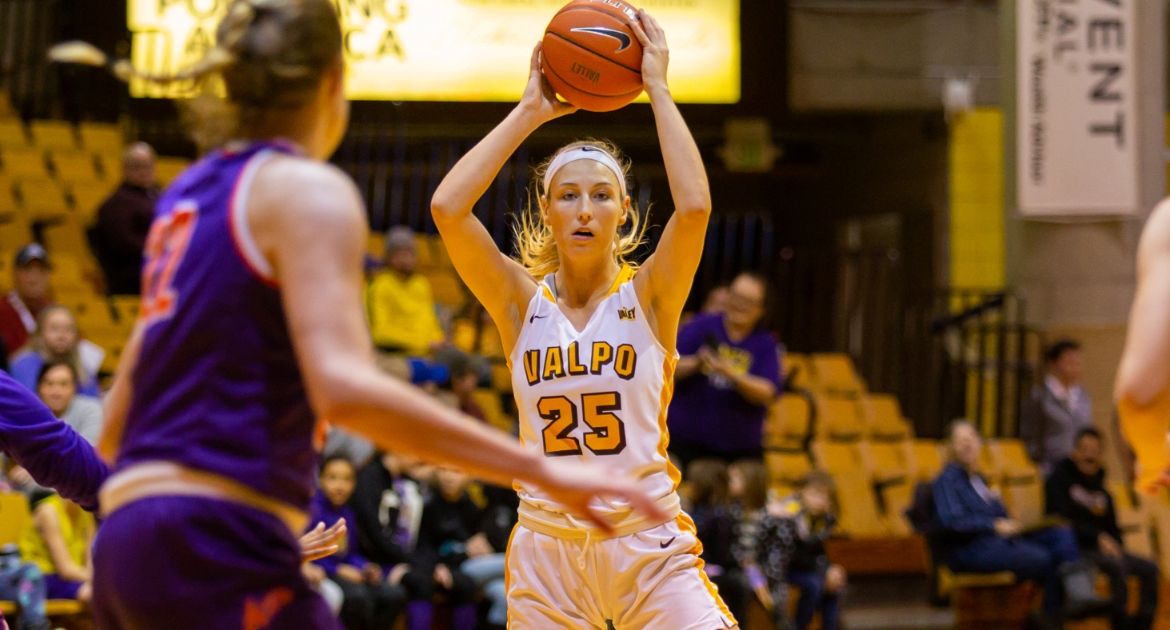 The Valpo women’s basketball team overcame an 11-point first half deficit Thursday evening at the ARC against Evansville, outscoring the Purple Aces by 20 in the second half to pull away for a 72-54 victory. Senior Grace Hales (Cromwell, Ind./Westview) led the Valpo charge with 20 points, including a career-high six 3-pointers made, while sophomore Shay Frederick (Greenville, Wis./Hortonville) tied her career best with eight assists.

“At halftime, we just talked about the things we needed to do better, both offensively and defensively. I thought our effort in the first half was fine - we came out sluggish defensively, but I felt we made that adjustment between the first and second quarter. I told the players we needed two more quarters that looked a lot more like the second quarter than the first.”

“This really is an unselfish group, and I think that's what has helped us be successful this year. We have a lot of kids who are really good basketball players and a lot of players who will share the basketball.”

“This is the second game in a row where we've put the ball in Shay's hands, and in Ilysse's hands there at the end of the third quarter, and let them create. I think it's a testament to how good those two players are, but they're good because everyone around them keeps moving and keeps screening. Ella's screen on grace Hales' second 3-pointer from the corner in the 4th quarter was huge - that kid was closing out, and she stands there and sacrifices her body to get her teammate an open shot. That's not an assist, but it should be, because without that, we'd never have gotten that three off.”

Valpo (12-9, 4-6 MVC) looks to make it a clean sweep of its fellow Indiana schools in MVC play this year on Saturday afternoon when it hosts Indiana State at the ARC. Tipoff will be at 1 p.m., and the game will be broadcast live on ESPN3.