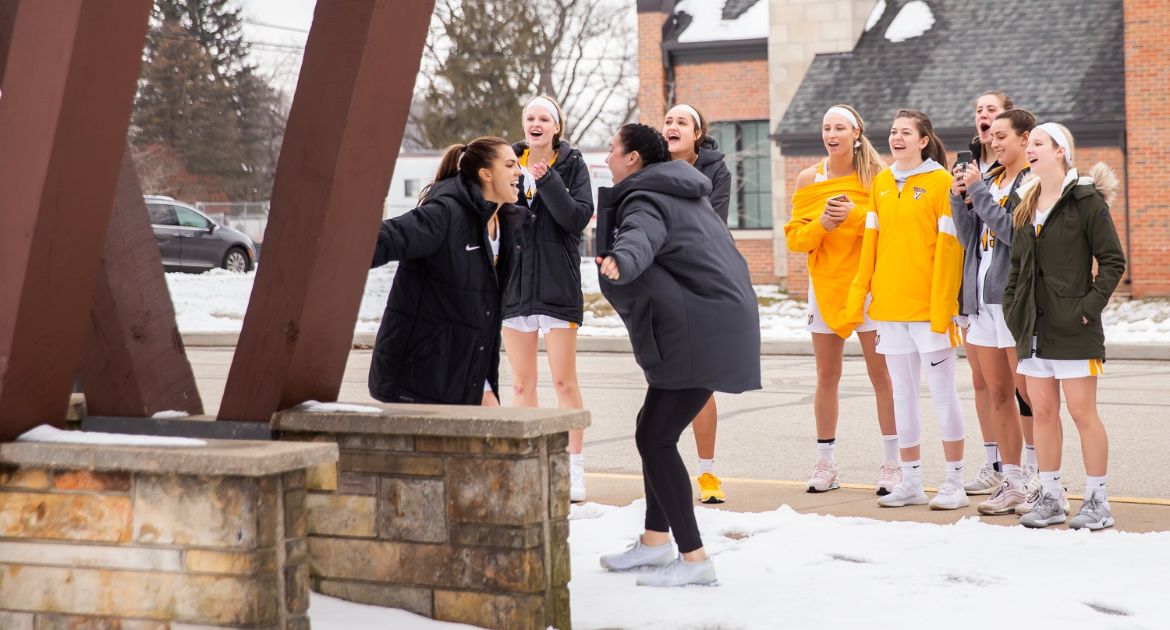 Valpo celebrates out at the Victory Bell after winning on Saturday.
Indiana St. at Valparaiso | February 08, 2020

The term shutout isn’t one used in the sport of basketball very often, but when it does get bandied about, you know something unique has happened. That’s what took place Saturday at the ARC, as the Valpo women’s basketball team posted a shutout of Indiana State in the second quarter, out-scoring the Sycamores 17-0 to turn a four-point deficit into a 13-point halftime lead en route to a 61-45 victory. Fittingly, the victory on Basketball Day Indiana completed Valpo’s season sweep of the other two Indiana programs in the MVC.

“We came out of the gates really slow today. I thought our adjustments were mainly to our energy level - we came out in the second quarter and did a great job. We held them scoreless, which is a great feat, and then scored 17 points.”

“The second half was just a fight; it was just an ugly basketball game. There were a lot of turnovers, a lot of physical play. We won ugly, and I'm proud of our team for that, because I don't think that's something our team could have done last year or a couple months ago. Sometimes you just have to find a way to grit it out, and that's what they did today.”

“We did adapt today. We tried a lot of different things offensively to try to score. We learned really early on that trying to drive the ball to the basket and score on layups was going to be a hard thing to do, so I thought we did some good things creating some wide open 3-point shots and also we created some space to score on cuts, and that seemed to get the baskets we needed at the rim.”

“It’s a tremendous job by our players - they pay attention, they listen, they give a lot of really good feedback over the course of the game so we can make adjustments because they see and hear things that we can't. Really, hats off to them for staying together, staying positive, and really putting defense first.”

Valpo (13-9, 5-6 MVC) will try to make it three wins in a row next Friday evening when it makes the trip to Peoria, Ill. to face Bradley. Tipoff is slated for 7 p.m., and the game will be broadcast live on ESPN+.