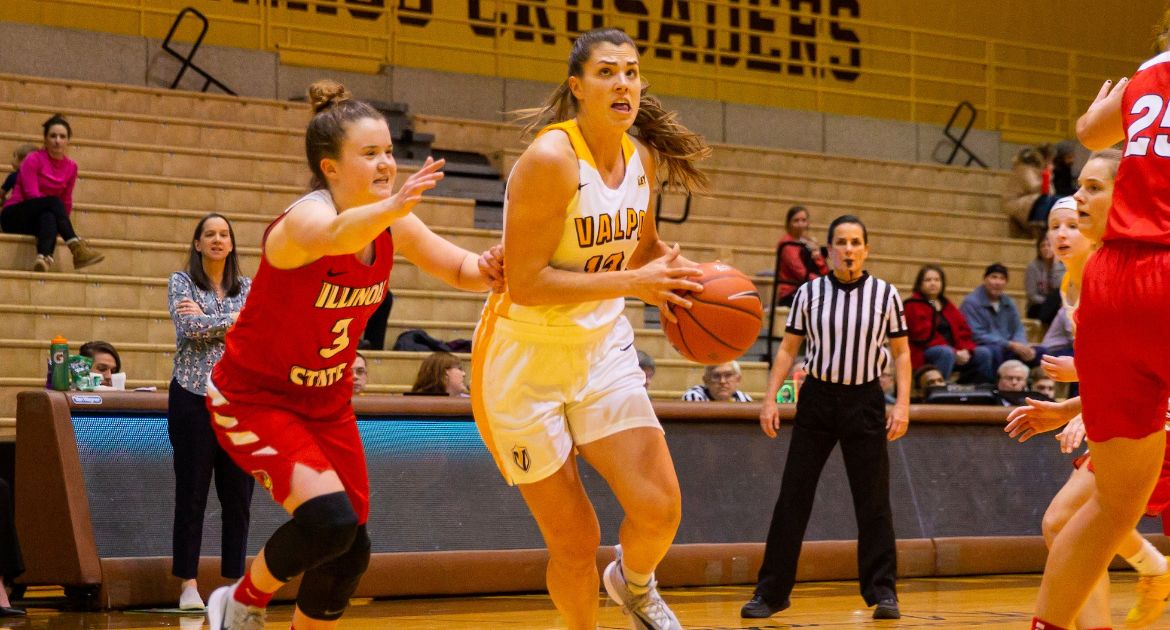 A 2:45am fire alarm and hotel evacuation the night before a game might affect a lot of things, but it didn’t affect the defensive effort out of the gate for the Valpo women’s basketball team on Sunday. Valpo jumped out to a nine-point lead on Illinois State through one quarter, limiting the Redbirds to nine first-quarter points, and then used a career game from junior Addison Stoller (Cissna Park, Ill./Cissna Park), key contributions at various points from a number of players and accurate free throw shooting throughout the game to keep the Redbirds at bay, earning a 78-70 road win.

“I think it shows a lot of maturity as a team to be flexible enough to handle the change to their typical game-day routine and the adversity of getting into some late foul trouble. We have talked a lot about controlling the things that we can control the last couple of weeks, and I think they did a great job staying focused and doing that today. I am really proud of the way they kept any of that stuff from creeping into their heads, stayed focused on the game plan and played every possession the best that we could.”

“I think that we did a much better job today matching up in transition and finding Crompton and Maggett in transition than we did in the first meeting. We fronted the post better and rotated much better in our help side. Offensively, we moved and shared the ball much better. We set better screens, worked together to create space, and made the offense work for us.”

“Addy was huge today! She came out of the gate really aggressive on offense, defense, and rebounding, and I think it really set a tone for our team. She is an extremely talented player and our team did a great job creating space and getting her the ball today.”

“Marlee is one of the toughest players I have ever coached. She brings a bit of an edge to our team that it needs. You know she is going to always play great post defense, rebound, and most importantly, she is a great communicator. She really helps anchor our defense when she is in the game. Her return will give us more depth and experience coming off the bench.”

Valpo (14-10, 6-7 MVC) closes out the current three-game road stretch at Loyola next Saturday afternoon at 2 p.m. The game will be broadcast live on ESPN3.