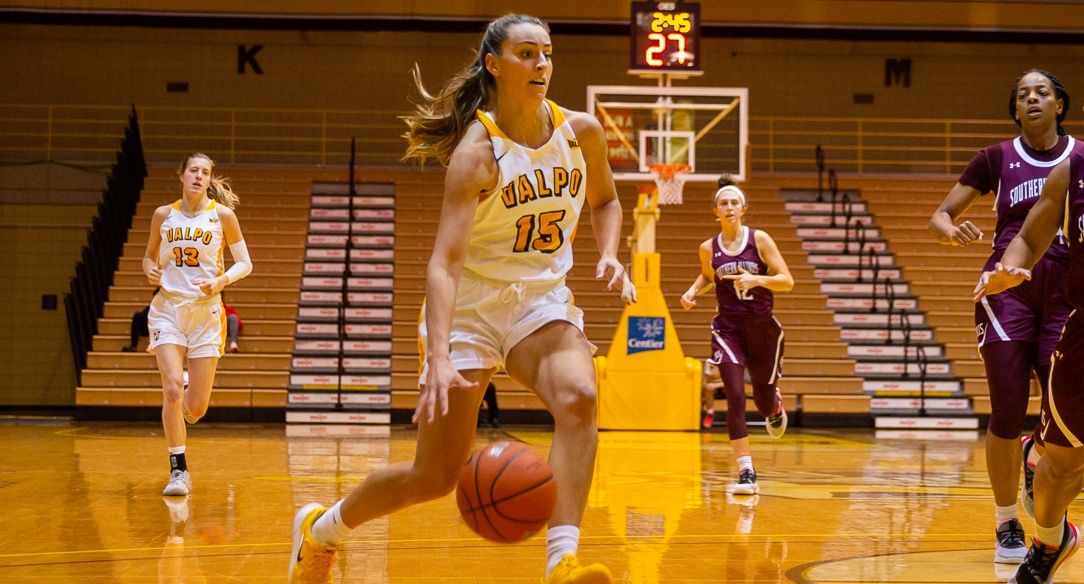 Carie Weinman scored 17 of her season-high 21 points in the second half Saturday.
Valparaiso at Loyola Chicago | February 22, 2020

It wasn’t quite as dramatic as the first meeting of the season between the two programs, but the result was the same on Saturday as the Valpo women’s basketball team fell behind by double figures in the first half at Loyola before rallying for a 70-57 win over the Ramblers to complete the season sweep. Sophomore Carie Weinman (Glenview, Ill./Glenbrook South [Denver]) led the way in the win, scoring 17 of her season-best 21 points in the second half.

“The team did a great job of staying together and defending during the first quarter through our shooting woes. That shows a lot of growth for this program. It is something that we talk about a lot and have struggled to do at times. This team is really good defensively – we need to anchor our play with our defense, and if we are making shots, that is a bonus.”

“We improved our communication in the second half and started really flying around in our defensive rotations. We made a real effort to guard our player and work to stop drives without rotating. When we did rotate, we arrived early and had some good traps and rotations behind them. We got a ton of deflections and made plays.”

“Carie is a great overall basketball player. She has great instincts on both offense and defense. She is still figuring out some things with our offense, but she brings tremendous energy to our defense night in and night out.”

“Having Grace White and Marlee back will really provide a lift and add to our overall depth. They both bring a toughness and an ability to rebound that will help our team moving forward.”

Valpo (15-10, 7-7 MVC) returns home for its final games at the ARC this season next weekend, starting Friday evening against UNI. Tipoff is set for 6 p.m., and the game can be seen live on ESPN+.