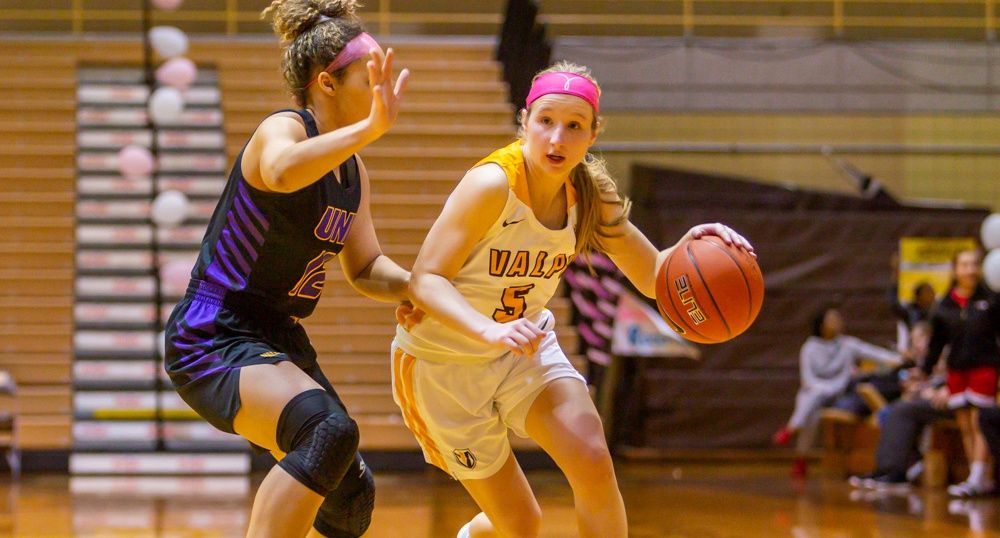 It didn’t require a flashy comeback or feature a ton of 3-pointers. Instead, Friday night’s Valpo women’s basketball victory over UNI was just a hard-fought battle in MVC play with 15 lead changes and 10 ties, one in which the Brown and Gold emerged victorious by a 72-69 final. The win, which was led by a career-high 22 points from sophomore Shay Frederick (Greenville, Wis./Hortonville), assured Valpo of its first winning season since the 2008-09 campaign and puts the program in a tie for fourth place in the MVC standings entering the weekend.

“We talked before the game about how we needed to battle for 40 minutes tonight. We talked about how we were going to go on runs and they were going to go on runs - we just needed to stay together and lean into each other when UNI's runs were happening and stay solid. They did that, they stayed together. UNI shot the ball really well in the first half - we felt like that wouldn't last the whole game, and our players came up big in the fourth quarter and came up with some big stops.”

“We went into a zone defensively, and I think that gave us a bit of confidence. We got some stops. Then UNI was going back into one of their zones, one they didn't run at us when we played at their place earlier this year. We used halftime to talk about how we wanted to attack that and got everybody reorganized. I thought Shay, Ilysse, Carie, Grace White really did a great job on the top at attacking, getting in deep, and giving us the ability to play four against three on the bottom side of the zone. They made good decisions and players made big shots.”

Valpo (16-10, 8-7 MVC) closes out the regular season home slate on Sunday afternoon when it hosts Drake at 1 p.m. on ESPN+. Sunday will be Senior Day for the program, as it honors the five members of its senior class.