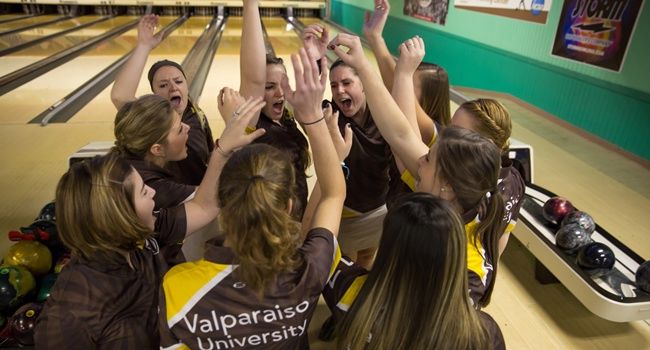 #14 Valparaiso continued one of its strongest tournament performances of the season Saturday, rolling the best traditional match score in program history as the Crusaders moved up to fifth place through two days of action at the Track Kat Klash in Huntsville, Texas.

The Crusaders opened the day against #9 UW-Whitewater and posted their best score in a traditional team match since the program’s inception.  All five bowlers rolled at least 194, with four of the Crusaders breaking 200.  Junior Sadie Jasinski (Franklin, Wis./Franklin) led the way with a game of 255, while redshirt junior Alyssa Alvarez (Antioch, Ill./Antioch) posted a 242.  Freshman Carly Larson (Merrillville, Ind./Merrillville) rolled a 234 and freshman Savannah Carr (Buckeye, Ariz./Youngker) kicked off a strong day with a 204 as Valpo downed UW-Whitewater by a 1129-1052 final.  The 1129 score for the Crusaders bested by six pins the previous record, an 1123 rolled against Sam Houston State on Dec. 1, 2012.

Valpo followed up the record-setting performance with a tough loss, falling to UAB 947-936 despite games of 210 from senior Torrie Decker (Van Wert, Ohio/Van Wert [Robert Morris (Ill.)]) and 200 from Carr.  The Crusaders bounced back for a narrow 881-874 victory over #16 Long Island, paced by a game of 212 by Carr.

For the second time on the day, the Crusaders hit four figures with a 1018-927 victory against Jackson State, as four Valpo bowlers broke 200.  Alvarez led the way with a 229 and Carr posted her best game of the day with a 222.  Sophomore Raychel Wolever (Charlotte, Mich./Charlotte) tallied a 216 game in the win, while Larson rounded out the quartet over 200 with a game of 202.

Valparaiso (46-47) closes out the Track Kat Klash with the third and final day of competition on Sunday.