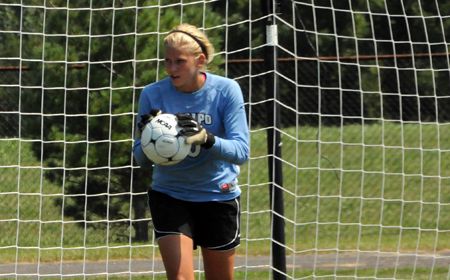 Valparaiso and Eastern Kentucky battled for 110 minutes on a sunny Sunday afternoon at Eastgate Field, but neither team could find the back of the goal and the two sides settled for a 0-0 draw in non-conference action.

“We had great support from our fans today,” head coach John Marovich said after the match.  “It was a great atmosphere, but unfortunately we didn’t score a goal to give them even more excitement.”

The Crusaders controlled the play in the opening 45 minutes with the wind, outshooting the Colonels 8-2, including a 4-1 advantage on goal, but could not beat goalkeeper Lyndsay Vance.

Valpo had eight more shots in the second half, including the only three on goal, and outshot Eastern Kentucky (1-4-1) 5-2 in the extra sessions as well.  Vance made nine saves on the afternoon while Crusader netminder Kristen Manski (Saint Charles, Ill./North H.S.) made three stops while earning her second shutout of the season.

Valpo had six corner kick opportunities in the contest as well, including four in overtime, while surrendering just one.

Luisa Desario (Bartlett, Ill./Bartlett H.S.) led Valpo with seven shots, including three on frame, as the Crusaders outshot the Colonels 21-9 on the day.

Valparaiso (3-0-2) will look continue its homestand on Friday evening under the lights of Brown Field, hosting Eastern Michigan.  Kickoff is set for 7 p.m.

Match Notes: This was the first meeting ever between the Crusaders and Colonels in women’s soccer … Manski’s second shutout ties her for ninth on the single season list and ranks her seventh alone on the career charts … Valpo’s last 0-0 draw came on Oct. 29, 2008 against Youngstown State in the Horizon League Tournament, which eventually advanced to penalty kicks … Desario has taken a league-leading 26 shot attempts through five matches this year … she now has 87 shots for her career, 10th all-time at Valpo.