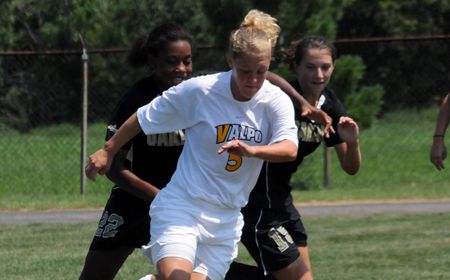 Trisha Wladecki had a goal and an assist in the season-opening victory on Saturday. (Ray Acevedo)
Valparaiso at UMKC | August 21, 2010
Related Links
Related Links

Luisa Desario (Bartlett, Ill./Bartlett H.S.) and Trisha Wladecki (Avon Lake, Ohio/Avon Lake H.S.) each had a goal and an assist as Valparaiso rallied from a halftime deficit to defeat UMKC 3-2 on Saturday evening in the regular season opener for both teams played at Durwood Soccer Stadium and Recreational Field in Kansas City, Mo.

Trailing 1-0 at intermission, the Crusaders tied the match just under 10 minutes into the second half.  Wladecki sent a cross from the right side that connected with Catherine Terrell (Brighton, Mich./Brighton H.S.) in the box.  Terrell finished into the lower right corner of the net, past Kangaroo goalkeeper Jami Finnell.

With 20:17 remaining in regulation, Wladecki gave Valpo the lead.  She finished a cross from Desario inside the 18-yard box to make it 2-1 Crusaders.

Desario then added what would prove to be a key insurance goal less than seven minutes later.  Desario converted on a through ball from Brooke Henderson (Westlake, Ohio/Westlake H.S.) with a low finish, increasing the advantage to 3-1.

“We utilized the field much better in the second half than we did in the first,” Marovich added.  “We had some really good runs.”

With just under 10 minutes remaining, UMKC cut Valpo’s lead in half as Taylor Bare finished a feed from Ashley Gann.  The Kangaroos would not be able to convert again though, and the Crusaders won their season opener for the fifth time in the last six years.

Valpo finished the match holding a 12-8 shot advantage, including a 7-4 advantage on goal.  Kristen Manski (Saint Charles, Ill./North H.S.) made two saves in winning her collegiate debut while Finnell made four stops for the Kangaroos.

The Crusaders also held a 4-2 advantage in corner kicks earned on the evening.

The first half was scoreless until 2:29 before the break when Gann picked up a loose ball and scored from just inside the 18-yard box to give UMKC (0-1) a 1-0 lead at the break.

“We were a bit out of sorts in the first half,” Marovich said.  “We got out of playing our game.”

Valparaiso (1-0) will return home on Friday evening as the Crusaders host Eastern Illinois under the lights of Brown Field.  Kickoff is set for 7 p.m.

Match Notes: Valpo is now 5-13 all-time in season openers, with all five victories coming in the last six years … this was the first meeting ever between the Crusaders and UMKC … the Aug. 21 start matched 2009 for the earliest opening match date in program history … the three goals scored were the most by Valpo since tallying three in a 3-2 win against Detroit on Oct. 11, 2009 … Valpo won despite trailing at halftime, something the Crusaders were not able to do last season (0-4) … the Crusaders also won with the Kangaroos scoring first, after going 0-7-1 when the opposition tallied the first goal in 2009 … besides Manski, freshmen Amanda Ulin (Solon, Iowa/Solon H.S.) and Lauren Gagnon (Grand Haven, Mich./Spring Lake  H.S.) both started their collegiate debuts.