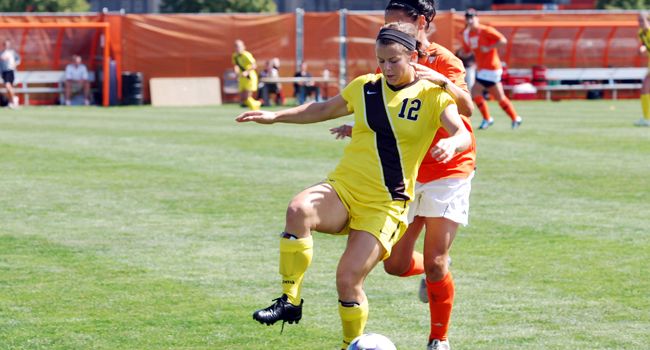 Mikki Nuccio’s (Ortonville, Mich./Brandon H.S.) goal with just five seconds remaining before halftime proved to be the difference in the match as Valparaiso defeated Butler 1-0 on a rainy and windy Wednesday afternoon at Eastgate Field.

“Both teams dealt with the difficult conditions well today and that is a testament to all of the players on both sides,” head coach John Marovich said after the match.

In the first half the Crusaders were moving with the wind but were unable to crack the back of the net until the final seconds.  Kelsey Draper (Perrysburg, Ohio/Perrysburg H.S.) started the play, leaving the ball for Casey Pedersen (Northville, Mich./Mercy H.S.).  Pedersen gave a touch to Nuccio at the top of the box, and the senior blasted the ball over Bulldog netminder Julie Burton into the back of the net for the lone goal of the match.

“It was a bit frustrating in the first half when we had the wind,” Marovich added.  “We wanted to take advantage of having the wind.  Mikki hit it hard and with the wind it helped what was a good shot.  Getting that goal before halftime was really big.”

The second half saw the Bulldogs try to take advantage with the wind, outshooting the Crusaders 12-2 in the stanza.  Kristen Manski (Saint Charles, Ill./North H.S.) came up big for the Brown and Gold, making six saves to keep Butler off of the scoreboard and securing the win.

“We went into the second half with a defensive plan and we did a pretty good job executing it,” Marovich said of the final 45 minutes.

Manski finished the match with eight saves for her sixth shutout of the season, moving the sophomore into a tie for third on the Crusaders’ single season charts.

“That’s a great shutout today,” Marovich stated.  “Against the wind the ball floats on you and makes it tough to judge.  In the second half, win the wind, the ball comes in at a rapid pace.”

Butler (7-8-1, 2-4 Horizon) finished the match outshooting the Crusaders 16-8 and held a 6-2 advantage in corner kick opportunities.  Burton made four saves for the Bulldogs, three of which came in the first half.

With the victory, the Crusaders have assured themselves a berth in the Horizon League Championships which begin November 1 on campus sites.

“I had told the team all season long that despite our record and past successes we had not accomplished anything yet,” Marovich concluded.  “Now we have accomplished something.  Our next goal is to be prepared for Wright State on Sunday.”

Valparaiso (8-6-2, 4-2) will close out the home portion of the regular season against Wright State on Sunday afternoon at Eastgate Field.  Kickoff is set for 1 p.m. with Senior Day festivities taking place prior to the match.

Match Notes: Butler leads the all-time series 6-3 but the Crusaders have won the last three meetings between the two schools … Manski’s shutout was the 11th of her career, third all-time at Valpo … Nuccio’s goal was her third of the season, all match-winners … four of Nuccio’s five career tallies are match-winners … Pedersen’s assist was her second of the season while Draper’s was the first of her career … Pedersen now has 16 career points … the shutout was the eighth of the year for the Crusaders, tied for second on the team’s single season charts … Tracy Roos (Centennial, Colo./Cherry Creek H.S.) came out of the match for the first time since 2009 … Roos has started all 74 matches during her career … all four Horizon League wins by Valpo have been 1-0.