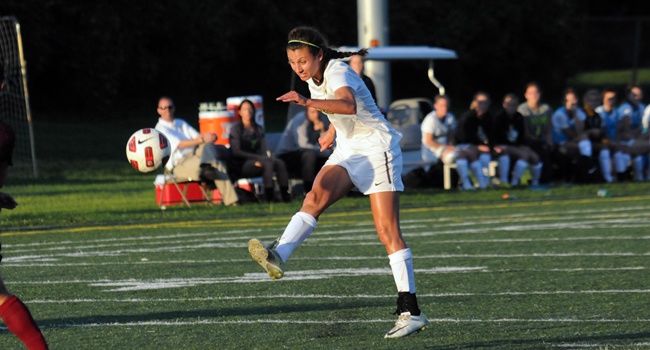 Rita Craven had a shot on goal for the Crusaders Sunday.
Valparaiso at Loyola Chicago | August 18, 2013
Related Links
Related Links

A single goal decided the Valparaiso women's soccer team's exhibition finale Sunday in Chicago, as a 54th minute goal sent the Crusaders to a 1-0 loss against Loyola.

The teams played through a scoreless first half, with both teams tallying five shots apiece while being held off the scoreboard.  But Loyola's Monika Lee found the net less than 10 minutes into the second stanza, and neither of the Crusaders' shots on goal in the second half could equalize the game.

Valpo out-shot Loyola on Sunday, 10-8, and put five shots on goal to the Ramblers' four.  Kristen Manski (St. Charles, Ill./North) made three saves in goal for the Crusaders.  As it did on Friday, Valpo ran out 21 players over the course of Sunday's fixture as training camp winds toward a close and regular season play lurks right around the corner.

The Crusaders will open the regular season with a pair of home games next weekend, starting with the season opener Friday night against DePaul at Brown Field under the lights at 7:30 p.m.  Live stats for the contest will be available through ValpoAthletics.com.