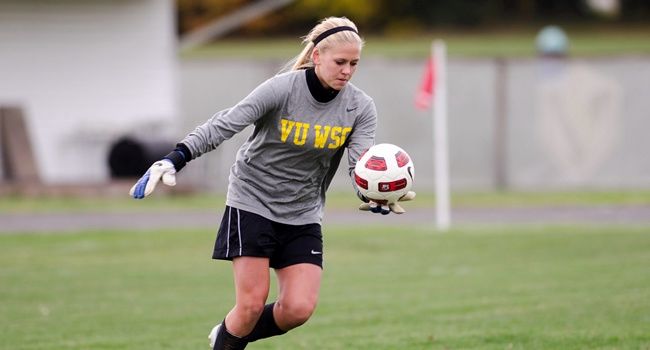 Coming off of a thrilling overtime victory that saw Valpo find the back of the net in the 94th minute, the Crusader women found themselves in a similar situation Sunday afternoon at Kent State.  For the second straight game, the result would be decided with extra time.   After battling back and forth for nearly 109 minutes, the Crusaders women would fall 1-0 to Kent State on a goal scored with just over a minute left in the game.

The Crusaders tested the Golden Flash early on in the game, as forward Jordyn Ryfiak (Rockford, Mich./Rockford) forced the Kent State goalkeeper to come up with an important save in just the first minute of play.  After a quick start, the Crusaders would continue to create quality chances on goal.  Valpo was able to get in and behind the backline of the Golden Flash, but were unable to finish the chances they created.

“We gave ourselves plenty of chances in the game - playing balls into dangerous areas off of our set pieces, slotting balls across the mouth of goal, and even hitting a ball off the near post.  We just missed that final touch in front of goal,” said head coach John Marovich.  “It’s one of those things - when you create quality chances you need to put them away.”

Kent State would test the Crusader defense throughout the game.   But the group, already carrying two shutouts two its name this season, limited the Golden Flash to only long range efforts.  Crusader goalkeeper, Kristin Manski (Saint Charles, Ill./North) was forced to make only 7 saves in the game, with most of the shots coming from distance.

After trading blows for 90 minutes, the two sides would go into overtime with the score deadlocked at 0-0.  The Crusaders created a great chance in the 102nd minute, as Ryfiak served a ball in front of goal off a corner kick, but again, the chance was left unfinished.  The two teams stayed level for nearly two periods of overtime until Kent State’s, Jessica Gironda was able to redirect a ball that had hit the post, into the Crusader goal in the 109th minute of play.

“Today we saw a very even battle.  We have a very sound defensive group, and today they showed great effort in their play.  The difference in this game was our finishing - we just needed to be more consistent in the attacking third,” said Marovich.  “We played a quality side in a hostile environment and I like the way we responded.  These are the types of games that we need to play in order to prepare for conference play.  From that standpoint, I am pleased with where we’re at; it’s a young group with great depth.  It’s coming.”

Valparaiso (2-2-0) returns to Brown Field this Thursday (September 5th) to take on the Northwestern Wildcats.  Kickoff is set for 7:30 p.m., with live video and live stats available at ValpoAthletics.com.