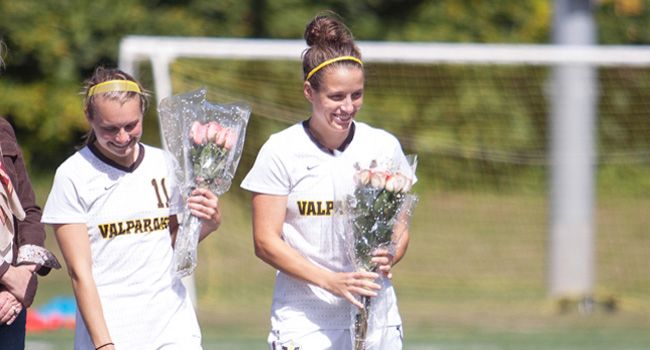 The Valparaiso women's soccer team closed out its non-league slate Sunday afternoon at Brown Field on a positive note, as first-half goals from sophomores Jenny Fassbinder (Hudson, Wis./Hudson) and Sarrah Ludwig (Downers Grove, Ill./South) stood up for the Crusaders in a 2-1 victory over Eastern Illinois.

With all six seniors in Valpo's starting eleven on Sunday, it would be Gagnon who helped to set up the game's opening goal in the 12th minute. With the ball in the attacking third, Gagnon sent a pass on the left side to Fassbinder, who controled outside the box and then made a move past her defender. The sophomore hit a shot from 15 yards out which EIU goalkeeper Emily Hinton looked to save, but it bounced off her hands into the back of the net at the near post to give Valpo the early 1-0 advantage.

Valpo added its second goal of the game just over four minutes before the break. Junior Kristen Warner (Lombard, Ill./Glenbard South) took a corner kick from the left side and sent it to the top of the box on the far side. Ludwig was there to corral it, took a touch and then rifled a strike inside the near post to make it 2-0 to the Crusaders at halftime.

"I thought to get two goals in the first half put ourselves in a really great situation," said Crusader head coach John Marovich. "The set piece that Sarrah scored off of was well-excuted and was a great shot by her."

Having been limited to just two first-half shots by the Crusader defense, Eastern Illinois pushed forward in the second half, ending the final 45 minutes with 10 shot attempts. The Panthers pulled a goal back in the 72nd minute, when on a break, Meagan Radloff chipped a pass over a Valpo defender, setting up Hannah Miller for a one-on-one with Manski. Miller finished to bring EIU back to within 2-1, but over the last 18 minutes, the Crusaders surrendered just two shot attempts, neither of which were on frame.

"In the second half, it was unfortunate that we gave away a goal, but these are things we have to learn to deal with," said Marovich. "We haven't been up 2-0 much this year, and to play with the lead for 45 minutes, it takes a different mindset than playing up 1-0. We need to do a better job playing just to kill the game and not be too anxious to score. Our players felt good going forward and tried too hard to score that third goal, got caught in a counter and gave away a goal. We've got to be more thoughtful about picking and choosing when to push for another goal in those situations, but that's a gt lesson to learn prior to going into league play."

Eastern Illinois (0-9-0) closed out the game with a slight 12-11 advantage in the shots department, while the Crusaders put six attempts on goal to the Panthers' five. Both Manski and Hinton made four saves. The Crusaders also earned five of the day's seven corner kicks.

Valparaiso (6-3-1) kicks off Horizon League play on Saturday night at defending league champion Milwaukee. Kickoff is slated for 7 p.m., and links for live stats and live video will be available through ValpoAthletics.com.