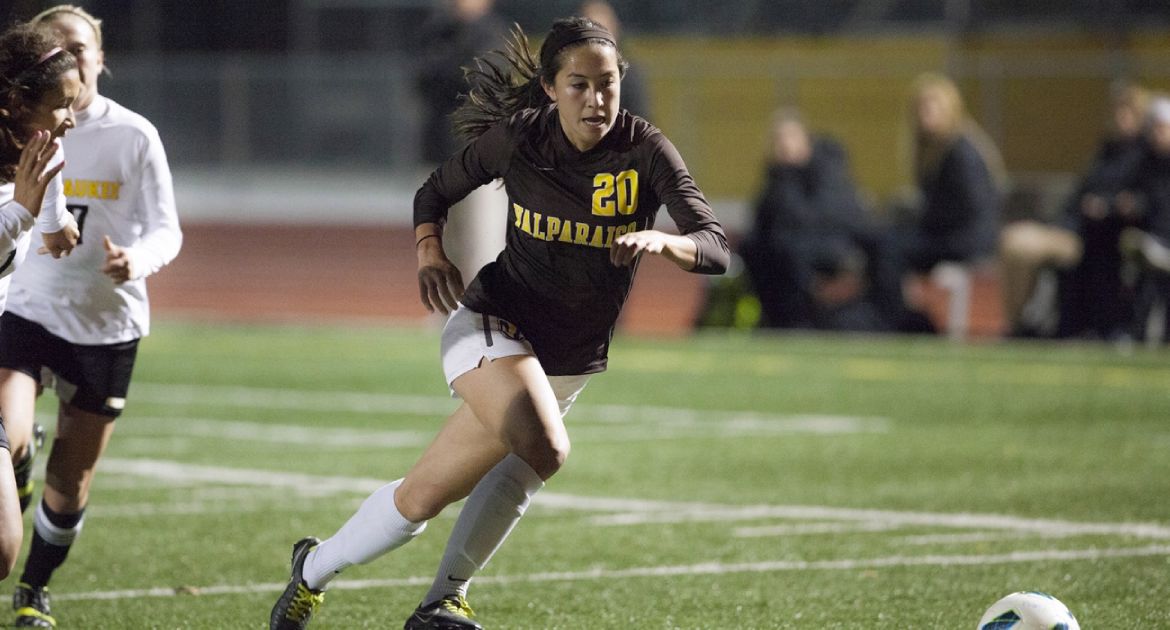 The Valparaiso University women’s soccer team earned a win over fellow mid-major foe Miami (Ohio), scoring a goal in each half to down the RedHawks Friday afternoon, 2-0, in Oxford, Ohio.

The Crusaders took full advantage of their opportunities at goal Friday, scoring a pair of goals on four shots on goal. Valpo broke the scoreless deadlock just after the midway point of the first half, as senior Sarrah Ludwig (Downers Grove, Ill./South) was taken out in the box and the referee awarded a penalty kick to the Crusaders. Senior Rita Craven (Frankfort, Ill./Lincoln-Way North) stepped up and took the spot kick, converting for her first goal of the season to make it 1-0 Valpo.

Junior April Cronin (Glenview, Ill./Glenbrook South), the Crusaders’ leading scorer in 2014, got off the mark in 2015 as well to provide Valpo an insurance tally in the second half. Junior Robin Wenzel (Woodstock, Ill./Marian Central Catholic) forced a turnover which allowed Cronin to take possession. Cronin got free on the left side of the box, turned and beat the Miami keeper to the near post to give the Crusaders a 2-0 edge – a lead which they would maintain the rest of the way.

Miami owned a 15-5 edge in the shots category, but Valpo was much more efficient with its chances, putting four shots on goal to the RedHawks’ two. Junior goalkeeper Sydney Galvez-Daley (Chicago, Ill./Fenwick [Creighton]), making her first start of the season after missing the opening weekend due to injury, made a pair of saves to preserve the clean sheet. Vic Maniaci took her first loss of the year for Miami (2-1-0), making two saves in the losing effort.

“We’re pleased to get a result on the road against such a quality team,” said Crusader head coach John Marovich.  “Miami is a great team and well-coached, and to come into Oxford and get a win is not an easy thing to do, so we feel pretty good about that. I’m really pleased with everyone’s performance today – I feel like everyone did something to help us come out with the win. Overall, we’re quite pleased, as it was another good opportunity to evaluate our team, and we’ll look forward to get back to training towards next Friday’s match”

Valparaiso (1-2-0) returns to action next Friday, Sept. 4 as the Crusaders continue their season-opening five match road trip at Belmont. Kickoff next Friday is slated for 3 p.m. CT.