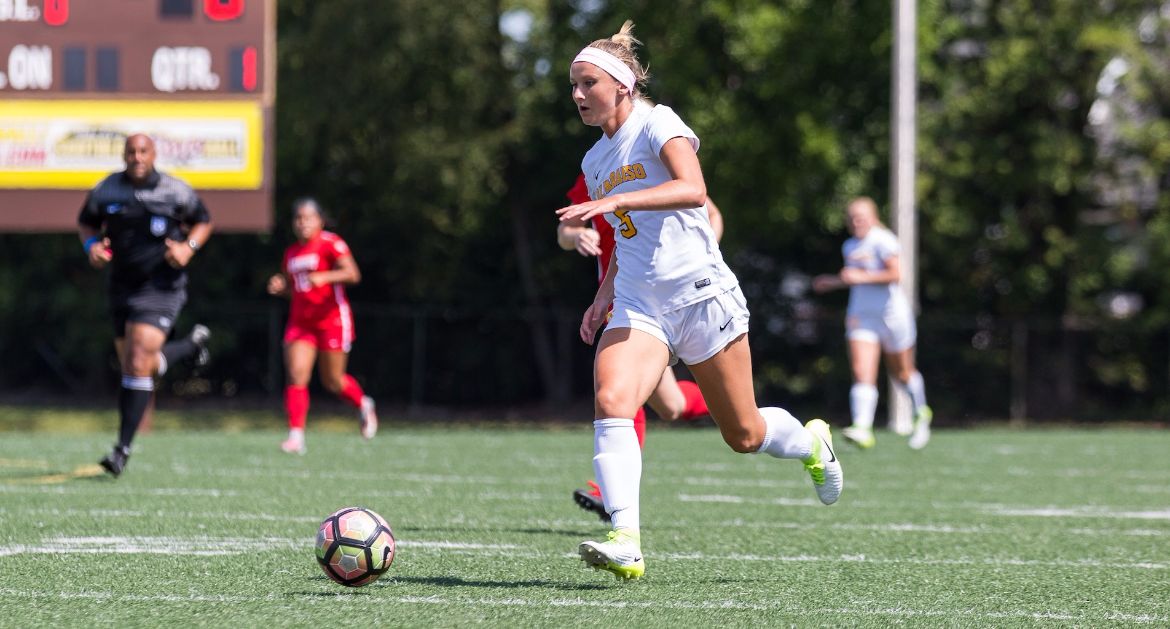 Lily Chetosky was one of two Crusaders to score her first career goal Thursday.
Chicago State at Valparaiso | September 28, 2017

How It Happened
- The Crusaders needed less than nine minutes to get on the board Thursday night. Freshman Keegan Maris (Batavia, Ill./Batavia) sent a cross into the box, where junior Cory Griffith (Lemont, Ill./Providence Catholic) attempted a shot that ricocheted off a CSU defender. The rebound bounced into the air and junior Sydney Griffin (Hinsdale, Ill./Hinsdale Central [New Hampshire]) took advantage, heading it home from the edge of the six-yard box to put Valpo ahead.
- Valpo then tallied back-to-back insurance goals less than 90 seconds apart. In the 17th minute, Griffin gained possession off a turnover and slid a pass to Griffith in the center of the field. Griffith placed her attempt from the edge of the box inside the right post to make it 2-0 Crusaders.
- Then, in the 18th minute, Griffin pushed the lead to three goals, taking advantage of a giveaway by the CSU goalkeeper and launching a shot from just outside the 18-yard box for her second goal of the game.
- A combination play led to the Crusaders’ fourth goal in the 33rd minute. Junior Ava Porlier (Downers Grove, Ill./South) played a ball up the field for Maris, who slipped a pass to Eksten. The sophomore’s shot from 15 yards out found the upper-right corner for her first career goal.
- Valpo capped its scoring in the 37th minute, as Porlier played a through ball behind the defense onto the run of Chetosky. The senior did the rest, beating CSU goalkeeper Audra Wisehart with her first career goal.
- CSU notched its lone goal in the 60th minute, as Miranda Coen finished a scramble off a corner kick at the near post.

Inside the Match
- Griffin tallied a career-best five points on Thursday, finishing with her first career two-goal game along with an assist. Griffin now owns a team-best six goals on the season, all of which have come at the friendly confines of Brown Field.
- Griffith picked up her fifth goal and third assist of the season. Her goal in the 17th minute proved to be the match-winner – her third-such goal of the 2017 season. She now owns eight career match-winning goals, good for fourth-most in program history and just two away from the program record.
- Maris recorded her first career two-assist game and has tallied a team-best four assists on the year. Her four assists are tied for 10th-most in a single season in program history and just two shy of the record of six.
- Porlier also picked up a pair of assists in Thursday’s win, the second and third of her Crusader career.
- Eksten scored her first career goal in her fourth appearance of the season, while Chetosky’s first career goal came in her 16th game in a Crusader uniform.
- Valpo enjoyed a 30-9 advantage in shot attempts on Thursday, including a 15-8 edge in shots on goal. The Crusaders also attempted four corner kicks to the Cougars’ one.
- Junior Drew Moulton (Sycamore, Ill./Sycamore) made five saves for Valpo to earn the win in goal, playing the first half. Freshman Kezia Gesell (Winnipeg, Manitoba/Glenlawn Collegiate Institute) played the final 45 minutes in goal and made two stops. Wisehart stopped nine shots for Chicago State.
- A total of 22 players saw the pitch for the Crusaders Thursday night, as none of Valpo’s field starters played more than 40 minutes.

“I was pleased with the way we scored the three goals in the first 18 minutes. I really felt like once we were able to figure out our one-twos and were able to share in the attacking third, it really created some good goals for us.”

“I’m really happy that we were able to get a lot of players on the park tonight and that Anna and Lily scored their first career goals. It’s really great to have extended minutes for players that we don’t normally to see play those kind of minutes. It’s great experience for them and a great opportunity for them to grow and learn from in-game action.”

“All in all, anytime you get a win, it’s a good win. We’ll re-focus our attention on Saturday now, where three big points are on the line in Valley play.”

Valpo (7-5-0) has nothing but Missouri Valley Conference games remaining the rest of the way, beginning Saturday night at Drake. Kickoff from Des Moines is slated for 7 p.m., with live stats available via ValpoAthletics.com.