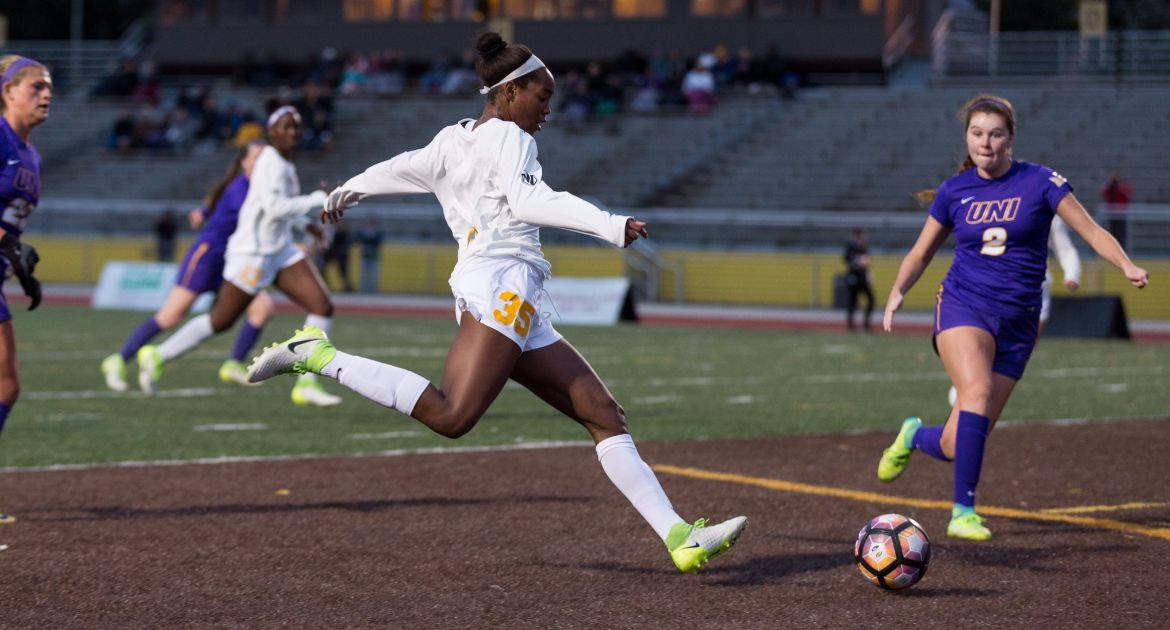 The Valparaiso University women’s soccer team forced extra time in a Missouri Valley Conference battle Sunday evening at Brown Field against UNI, but the Panthers found the match-winning goal in the 97th minute as the Crusaders fell by a 2-1 final.

How It Happened
- The Panthers struck first on Sunday, finding the back of the net in the 13th minute. Sarah Brandt slid a pass from the middle of the box to the left side, where Sydney Hayden finished, putting UNI on top early.
- The Crusaders answered in the 23rd minute, taking advantage of their first shot attempt of the match. Junior Sydney Griffin (Hinsdale, Ill./Hinsdale Central [New Hampshire]) got to the end line on the right-hand side of the pitch and sent a cross along the ground into the box to fellow junior Cory Griffith (Lemont, Ill./Providence Catholic), who calmly put it away from six yards out to level the match.
- The match would remain 1-1 throughout the remainder of regulation time. UNI had a pair of dangerous chances off corner kicks in the 36th and 80th minutes, but the Crusaders were able to parry away from scrambles near the goal line. The Panthers also had an effort in the 67th minute hit the crossbar, and another in the 87th minute strike the post.
- UNI would earn the win in the seventh minute of extra time. Off a corner kick, the ball got headed around in the box between the two sides. Finally, the Panthers’ Allison Bitter gained control and struck a shot from 12 yards out that found its way inside the right post for the decisive tally.

Inside the Match
- The Crusaders and Panthers finally kicked off on Sunday just after 5:30 p.m., 22 ½ hours after the original scheduled start time on Saturday night as thunderstorms forced the match to be moved back a day.
- The meeting was the first between the two sides since 2007.
- Valpo has not played to a draw since Sept. 19, 2015 and Sunday marked the 11th game that the Crusaders have played extra time in since their last tie (6-5-0).
- Griffith’s goal was her team-best seventh of the campaign, tying her mark from last season and moving into a tie for ninth on Valpo’s single-season chart.
- Griffith now owns 17 career goals – just one shy of fifth place in program history – and 40 career points.
- Griffin picked up her team-best fifth assist of the year, tied for third-most in a single season all-time at Valpo. The junior is just one helper away from matching the Crusaders’ single-season record of six, shared by Lindsay Holley (2003) and Laura Murphy (2006).
- UNI held a 17-6 advantage in shots on Sunday night and put five on goal to the Crusaders’ two. Junior Drew Moulton (Sycamore, Ill./Sycamore) made three saves in goal.

Thoughts From Coach Marovich
"Tonight, we were a bit loose in our defending on set pieces, which at the end of the night came back to catch us and didn't allow us to get a result here at home."

"As you look across the conference, all these games are tight and it's a constant battle to try to get points. We have to have a short memory and get ourselves right because we have another tough conference game at home on Wednesday. Our focus needs to be about getting ourselves mentally focused on doing the little details that make a big difference as we prepare for Wednesday night."

Next Up
Valpo (8-7-0, 2-2-0 MVC) welcomes Illinois State to Brown Field on Wednesday night for a 7 p.m. kickoff. Links for live audio and live stats will be available via ValpoAthletics.com.