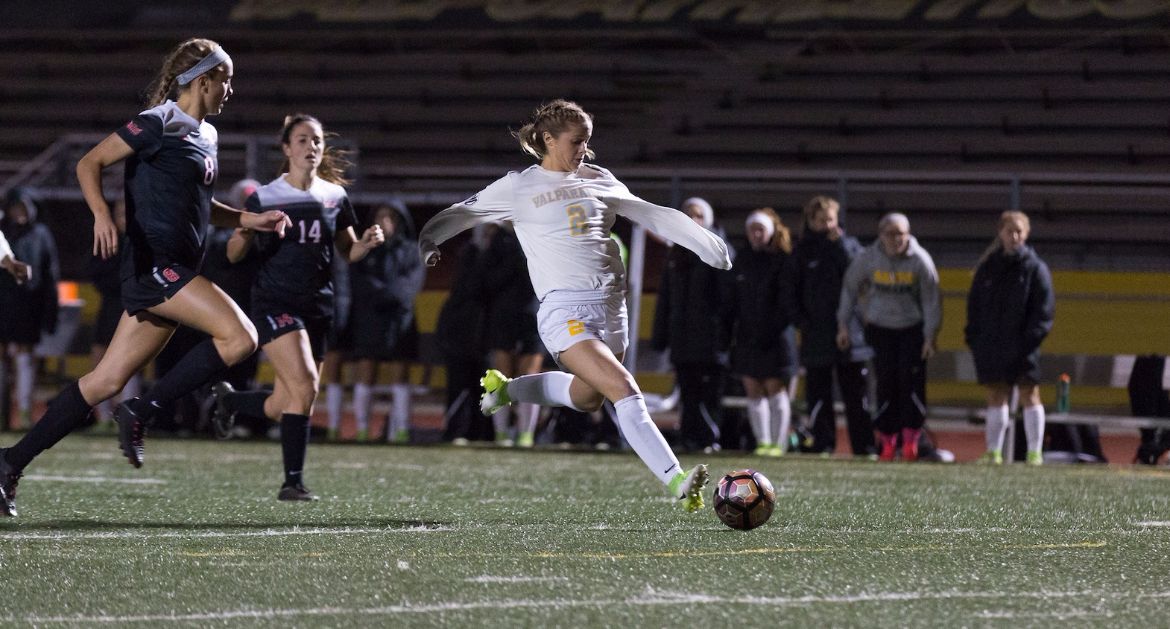 Junior Cory Griffith (Lemont, Ill./Providence Catholic) notched her second goal of the game in the 86th minute to give the Valparaiso University women’s soccer team a 2-1 victory at Indiana State Sunday afternoon as the Crusaders clinched a berth in the MVC Tournament. Griffith’s goal tied Valpo career and single-season records for match-winning goals, while earlier in the game, senior Grace Rogers (Woodbury, Minn./Woodbury) matched the program record for assists in a career.

"I'm really proud of our group. In games like today where so much is on the line, they can be highly stressful contests with a lot of tense moments throughout the match. We got up in the second half, Indiana State fought back and equalized, and I'm just so proud of how we responded and fought and found a goal at the end."

"I was really excited about the commitment from our players who didn't start today. Every player who came in made some kind of contribution to our performance, whether it was Maria with the assist on the game-winner or Lauren with some important minutes in the attacking third, or even Ava who started and played some big minutes in the middle of the park to allow us to save some minutes with some other players. It may seem small, but those are some really big moments that played in our being able to get the result today."

"Everyone who stepped on the field today made an impact, and made sure to step up when it was their time to step on. I feel like today showed the amount of pride our players have in the jersey, and what makes me most proud is our players showed the traits and attributes that we want them to show not only on the field, but off the field as well."

Valpo (9-8-0, 3-3-0 MVC) closes out the regular season on Thursday afternoon from Brown Field as the Crusaders kick off against Evansville at 4 p.m. Links for live coverage will be available at ValpoAthletics.com.